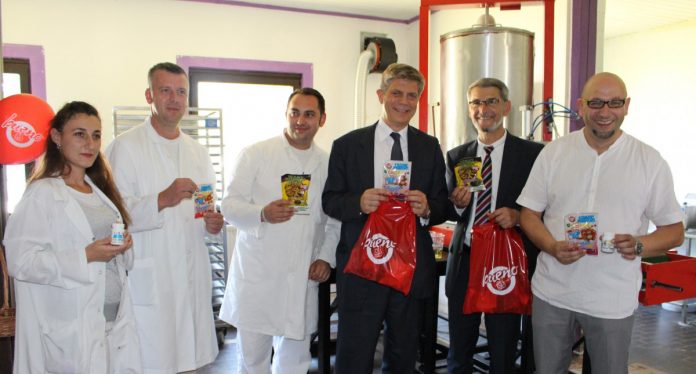 Thanks to the European Union donations, through the project Local Integrated Development (LID), in cooperation with the City of Tuzla and UNDP, the projects of Agricultural Cooperative Agropromet in Simin Han have been supported. Along with that, the company Traditional and Old Craft BUENO, which operates in RPC Tuzla-Incubator “Lipnica”, and whose activity is the production of sweet food products.

Head of the EU Delegation and EU Special Representative to Bosnia and Herzegovina, Lars-Gunnar Wigemark and Mayor of Tuzla, Jasmin Imamović, visited these two subjects.

European Union has donated funds for a cold store project at the Agricultural Cooperative, and 7,000 BAM to improve production of BUENO. The total value of the refrigerator purchase amounted to 85,000 BAM, of which about 60,000 BAM is an EU grant, through the UNDP/LID project, and 25,000 BAM is the co-financing of the City of Tuzla.

The Local Integrated Development Project is funded by the European Union and implemented by UNDP in Bosnia and Herzegovina. It is implemented in 21 cities and municipalities in the country. LID project is helping local governments to solve three major problems – to improve their services and reduce administrative costs, invest in infrastructure, and work to open new jobs for the socially vulnerable population.

Number of tourists in Bosnia and Herzegovina increased by 34.8 percent

Lukavac: International Tourism Fair – May 3 to 5