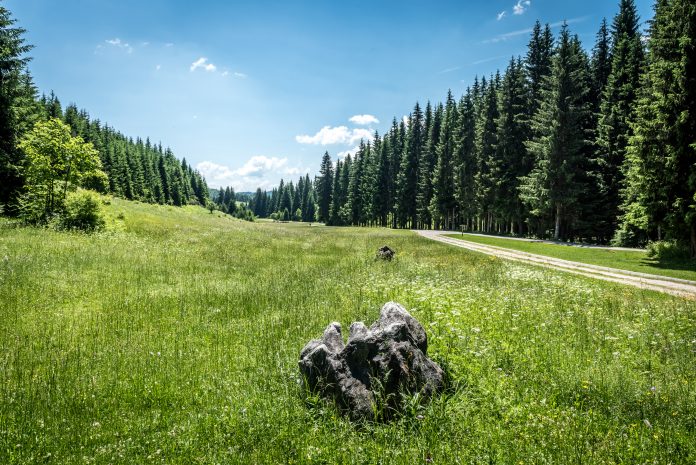 The protected landscape of Bijambare is 40 km away from Sarajevo, on the way to Tuzla. It is one of the few excursions in Bosnia and Herzegovina that suits all nature lovers – it is a true ambience for those who like walking, caves, clear waters, pine forests, recreation, and total silence.

The two-kilometer-long road takes you through the beautiful ambience of pine forests and flower meadows to the Bijambare mountaineering house, in the immediate vicinity of the Bijambare Cave. Visitors can reach Bijambare by a light walk or 50-seat electric car that moves slowly so that visitors can enjoy all the natural beauties of this resort.

There are seven caves in this protected landscape, and only the middle Bijambare cave is explored, illuminated and open to the public. Entrance to the Bijambare Cave is organized several times a day, and the maximum number of visitors in one term is limited to 30 persons.

Kind tourist guides who will present in details this natural phenomenon whose beauty is leaving everyone breathless will take you through the cave. The Bijambare cave is 500 meters long and consists of four halls with a large number of cave decorations.

-In the fourth hall, which is the largest, there are numerous stalactites and stalagmites. Because of these decorations, which are diverse in shape and size, this cave hall is one of the most beautiful in Bosnia and Herzegovina. It takes about 160 years for cave jewelry to grow a centimeter, and according to the jewelry we have, we can conclude that it is a few million years old cave – says Zerina Čelik, a tourist guide.

According to her, the summer temperature in the cave is five degrees Celsius, while it changes during winter, and due to the increased dissolution of the snow, drops of water create ice of a man’s size. Therefore, she says, the cave is closed for visitors in the winter.

– We can find ten animal species in the cave, and the most common are bats and cicadas. Bats are located in the dark parts of the cliff and can be seen only when a large number of visitors enter it and make noise, she says.

The Central Bijambare Cave is also extremely acoustic and is suitable for the organization of concerts. Zerina says that a concert of classical music was held a few years ago and the atmosphere was phenomenal.

-Moreover, eight years ago we had a romantic wedding. In the upper Bijambare cave, which is the oldest in the area of ​​Bijambare, the skeletons and tools of the caveman were found, which were transferred to the National Museum of Bosnia and Herzegovina – Zerina pointed out.

The protected landscape of Bijambare covers an area of ​​497 hectares, and besides the cave complex, there are many other facilities that guarantee a good holiday in nature. There is a wooden city for children, a playground with football and basketball courts, a necropolis of tombstones “Mramorje”, a protected historical site. In addition, you can rent a bicycle, walk through educational and forest trails, or enjoy a sporty climb.

Zerina says that the interest of visitors and tourists is extremely high, especially in the summertime when everyone is running away from heat to find a natural refreshment here.

-The most frequent guests are BH citizens, and lately numerous tourists from Arab countries. There are also French, Germans, Spanish … Simply, tourists from almost all of Europe – says Zerina.

Kula Grad near Zvornik: One of the largest fortresses of medieval...