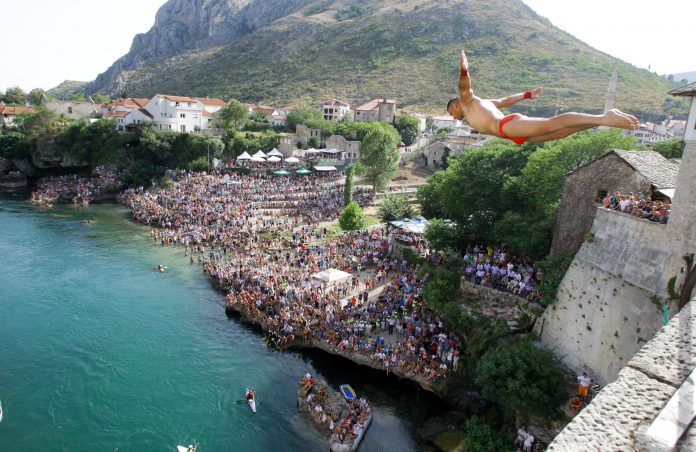 Immortalized on the flag and coat of arms of the city, the Old Bridge is the center of life in Mostar since its construction in the 16th century. Almost as legendary as the bridge itself is a photo of jumpers jumping from a 27-meter high bridge into the crystal water of the icy Neretva River.

This bridge, just like the Old Town, is under the protection of UNESCO, and is often cited as one of the most beautiful bridges in the world. The shape of the bridge itself also has its own story, it is said that it represents life … that the bridge represents one-half of the circle, and its reflection in water is the other half of the circle, and this whole picture represents life. It is a stage at which Mostarian young men prove their courage by jumping in Neretva, and it is a kind of maturity exam. The tradition of jumping is 451 years old.

– They run-up prior to jumping from the bridge, they fall down into the river and fly in the air like birds making special kind of stunts. Some jump steeply, another sitting in a Turkish way, some jump into the water in pair, or three persons at once; and they all happily go out on the shore, ascending to the rocks, they go to the end of the bridge to receive the gifts of the vizier and the champion – wrote famous travel writer Evliya Çelebi while observing jumpers from the Old Bridge in Mostar.

Following this quote, the spokesperson of Mostar jumpers Saša Oručević, saod that the jumping styles, described by the famous travel writer who is known worldwide, are preserved until today.

– We managed to preserve the tradition and this is one of the most beautiful news from the city, even though only bad news are constantly coming from here. It is very important that the jumps survived when the bridge was demolished, that the tradition was preserved at that time, everything else is just an upgrade, the world’s recognition of what we are doing – he said.

There are plans to include famous jumps from the Old Bridge in Mostar to the UNESCO World Heritage List soon, which everyone is eagerly waiting for. He claims that Mostar and the Old Bridge would become unique in the world.

Mostarian jumps are the most important tourist event and brand for Mostar and all of Bosnia and Herzegovina, and during the times of traditional jumps from the Old Bridge the city of Mostar is the most visited. That day, tourists from all over the world are inevitable guests of this pearl. Thus, on July 30, on the day of the 451st traditional jumping from the Old Bridge, Mostar will be the center of the world.

The jumpers will try their luck in jumping on their feet, but they will perform popular flight of swallows as well, from the most beautiful platform in the world, on the last Sunday in July. This year, as in previous years, participants will certainly come from all countries of the former Yugoslavia. However, most of the jumpers will be from Mostar.

Lawrence Listo, the famous Mostarian swallow, last year’s winner, who has won the title ten times, reveals that he was never more ready than this year. “Prince of Neretva”, only once managed to get close to the record of Mostar’s swallows like Emir Balić, who won 13 titles as the best jumper, and won the most titles in the history of the jumps in Mostar.

He recalls his beginnings, when he was five or six and began to jump from, two or three meters high cliffs, and this height increased over the years. He entered the competition for the first time in 2000. He never jumped on his feet. In 2004, he won the title for the first time.

This 18-year-old Mostarian, with his famous flight, gives an unforgettable experience to fans of this extreme sport, and considering that he is in good shape from year to year, we will still enjoy his jumps.

– I was preparing myself for jumps all year round. Every day I go to the gym twice and run twice. I am ready physically and mentally. I must admit that every year I enjoy jumping more and more, I think I am ready enough to win the first place again. As far as physical fitness is concerned, I think that I have given the maximum – said Listo, emphasizing that he wants to defend the title but also to pass without injury. Last year, he broke his finger at the competition and hurt his wrist, but he did not even think about giving up and still won the first place in such a condition.

Every year there are two or three new jumpers from Serbia, Montenegro, from Bosnia and Herzegovina, but unfortunately not from Mostar. He says that unfortunately this year, none of the long-standing jumpers will dare to perform swallow flight.

– The alarm turned on in Mostar, because there are no younger generations. I am afraid that swallow style will disappear. We never had worst situation when it comes to young people. We have to start a jumping school as soon as possible. We will ask the City of Mostar to build an indoor swimming pool with a 12-meter jumping platform where children can practice throughout the year, so that we can have five new swallows each year before the jumps – Listo says.

Midhat Hubijar, President of the Tourist Association of the Sarajevo Canton:...