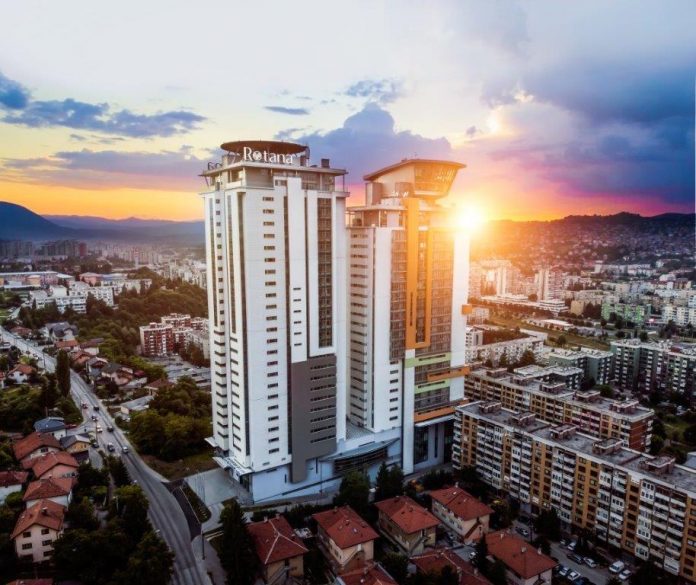 Rotana, one of the leading hotel companies in the region, with hotels around the Middle East, Africa, Eastern Europe and Turkey, announced the opening of the Bosmal Arjaan by Rotana, the first hotel in Sarajevo.

In the past few months, the Bosmal City Center project has been intensively renovating the interior of the building. Sarajevo, a city that is slowly but surely becoming an increasingly attractive tourist and business destination, after the completion of works will get the first deluxe aparthotel in this area, Bosmal Arjaan by Rotana.

The opening of this completely new aparthotel, which brings to the Sarajevo city a completely unique concept, is foreseen for July. Through the combination of the characteristics of the hotel and the home, in the perfect combination of one-bedroom, two-bedroom and three-room units, each of 132 apartments will provide guests with ambience for rest, enjoyment or work. All the apartments of the new Bosmal Arjaan Aparthotel are completed with supremely equipped kitchens and built-in advanced devices, enriched with the world-renowned standards of catering and services of this brand.

Thanks to the new concept, which will enable guests to stay in the atmosphere of the home, even when away from it, all guests of the new aparthotel will have the opportunity to enjoy the warm, cozy and relaxed atmosphere of the most spacious rooms in Sarajevo. As part of its offer, Bosmal Arjaan by Rotana will have a fitness and wellness center with a gym, sauna, Turkish bath, steam room and massage rooms. In addition, there will be two fully equipped meeting rooms offering space for small and large business and social events, along with audio-visual equipment of state-of-the-art technology.

-We are proud to have a role in development of Bosnia and Herzegovina and that we will contribute to the ambitious plan of this country to enrich the local service market and strengthen the positioning of Sarajevo on a regional and global map of promising tourist and business destinations. In addition, Rotana will focus on strengthening the country by employing, improving and developing talents throughout all its departments. We are pleased to support BiH in its development path and joint efforts to further strengthen its hospitality through the opening of the Bosmal Arjaan by Rotana Aparthotel, which will respond to the growing demand in the market. Opening of this deluxe aparthotel will also strengthen the diversity of hotel services in the service sector in Sarajevo – said Guy Hutchinson, CEO of Rotana, on the occasion of opening of the Bosmal Arjaan by Rotana aparthotel.

Bosmal Arjaan by Rotana is the first object of the hotel company Rotana in the territory of Bosnia and Herzegovina, as well as Europe. Founded in 1992, Rotana opened its first hotel in Abu Dhabi, and now has 112 hotels in 13 countries in its portfolio, with 46 hotels being under construction.