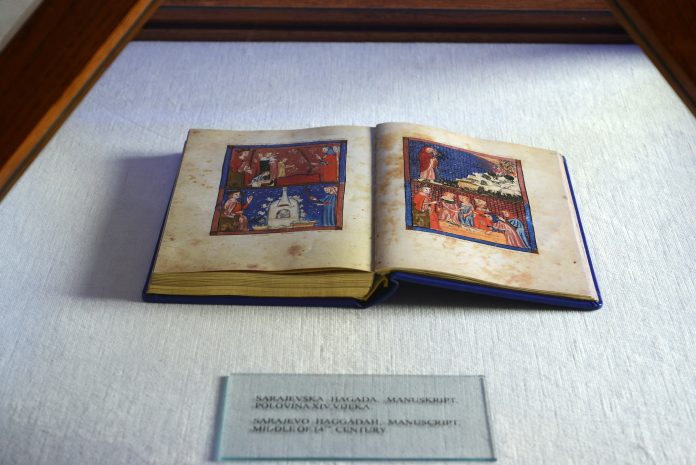 The brightest jewel of our country’s rich cultural heritage, which is kept behind the walls of the National Museum of Bosnia and Herzegovina, is certainly a Passover Haggadah, the Jewish illuminated codex, worldwide known as the Sarajevo Haggadah.

It was created in the second half of the 14th century in northern Spain, in the area of the former Kingdom of Aragon, probably in Barcelona, around 1350, and as stated on the official website of the National Museum of Bosnia and Herzegovina, it is possible that it was created as a wedding gift for members of two famous families: Shoshan and Elzar, because their coats of arms: a shield with a rosette / rose (Hebrew – Shoshana) and a wing (Hebrew – Elazar) can be found on the same site as the coat of arms of the city of Barcelona. On the territory of Bosnia and Herzegovina it has been brought by the exiled Jews, Sephardim, and in 1894 the National Museum bought it from a Sephardic family Koen, for 150 crowns.

The content of the Sarajevo Haggadah is written in penmanship and decorated with miniature paintings on processed and thin skin, which has 142 parchment leaves, making it unique in the world. Book survived the Inquisition, the First and the Second World War, and the last war in Bosnia and Herzegovina, and it stands ad a witness to the times in which cultural heritage was treasured. 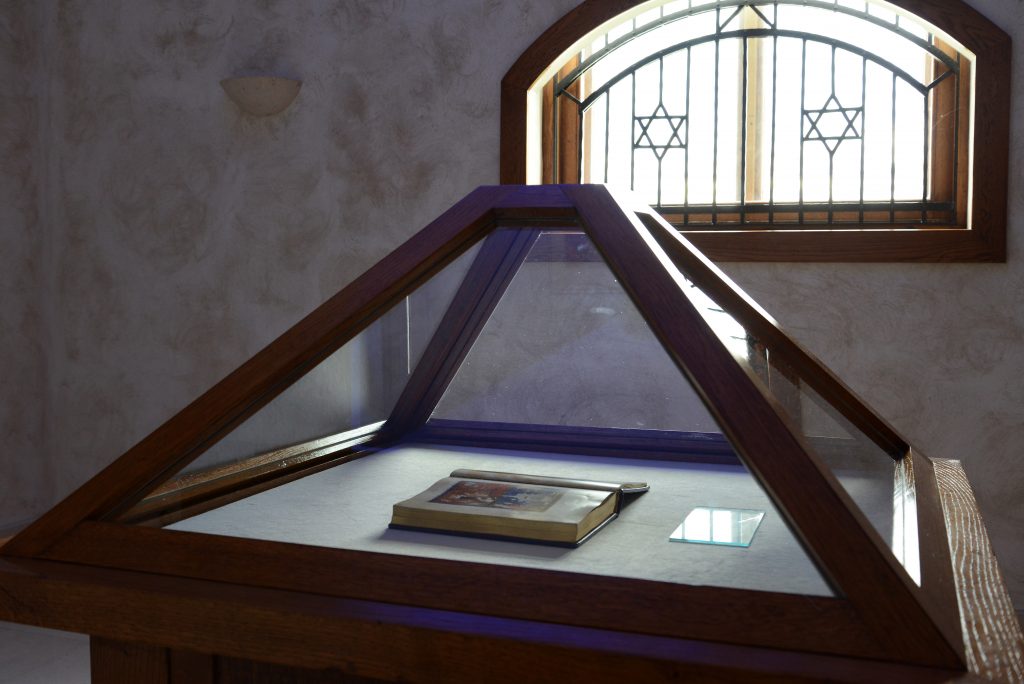 In the years after the war original Haggadah was rarely exposed, barely four times a year, but that will change in June, when it is planned to complete restoration and reconstruction of the room in which the Haggadah is placed, as well as the renewal of security system. The project “Haggadah, closer to you” implies a new way of presenting this valuable manuscripts, and it is financed by France, while UNESCO is in charge of the project implementation.

– The total value of the project is 150,000 BAM. Most of this money will be spent on the reconstruction of the room in which now Haggadah is held. New safe, which is very expensive, will be purchased. It is so expensive because it will be made according to the book, and two such in the world will not exist. The objective is therefore to raise additional book safety. The entire room will be rebuilt according to the safe; it will have new air conditioning and new setting, which apart from Haggadah, as a central part of this room, will include the original medieval charters, parts of the cape of King Tvrtko I – said Mirsad Sijarić, director of the National Museum.

Those who would like to see the Haggadah will pay a special ticket, because it is one of the sources of Museum’s income.

– There is a great demand for the Haggadah, and we should bear in mind that by the beginning of the war in Bosnia Haggadah was exposed only for few hours in the Museum, because appropriate conditions for that never existed. I think that the previous directors were trying to make a bit of mystique situation about it. We will determine permanent showtimes during which the original Haggadah shall be available – explained Sijerčić.

Three years ago, this valuable exhibit has been digitized, and this contributed a lot to its availability, and will help to better present the book as well, because, as Sijerčić reveals, National Museum of Bosnia and Herzegovina will take over the publishing and make printed edition of Haggadah.

– For this part as well, we will have the support of UNESCO. We will try to make the best edition so far and make it available to a broader audience. I also hope that based on these digital images we will be able to maintain an exhibition related to Haggadah, and all that would be presented to public in June, when the project ‘Haggadah, closer to you’ is completed and – concluded Sijerčić.

It was hidden from the enemy under the mosque doorstep

First days after the entry of German military forces in Sarajevo in 1941, their authorities demanded the director of the National Museum of Bosnia and Herzegovina, Jozo Petrović, to hand over, back than already well-known, leather Code. Petrović, with the help of the curator Derviš Korkut, with enormous risk of such action, manages to dodge the request, and Haggadah was moved in a safer place, according to the authentic narration, to the mosque, in one of the Muslim villages on mountain Bjelašnica, where it awaited the end of the Second World War.

The next attempt of its alienation occurred in the 50s of the last century, when the workers of the National Museum prevented the theft, and hopefully the last time when this valuable manuscript was threatened was at the beginning of the siege of Sarajevo in 1992, when the National Museum of Bosnia and Herzegovina reached the first line of city’s defense and suffered heavy destruction, some of which are not yet fully recovered.