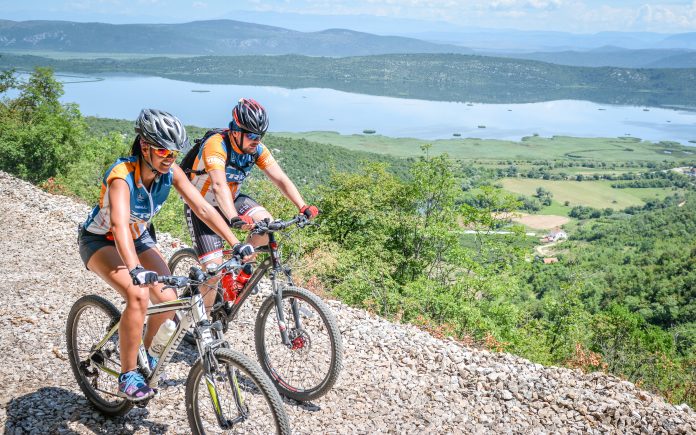 Thanks to the project “Cycling through history – Revitalization of the old narrow-gauge railway Ćiro”, this old railway line, which is a monument of life in the Adriatic hinterland, is once again available to the public.

The project was completed late last year, and its realization fixed and marked bicycle route that stretches 165 kilometers in Herzegovina, and 36 kilometers in the municipality of Konavle in Croatia, and this is the route where the old narrow-gauge Austro-Hungarian railway line  was placed, on which popular train “Ćiro” used to communicate.

On the section through Herzegovina, among other things, there are ten rest stops, which represent a kind of time travel. On these rest areas, visitors can learn all about the history of “Ćiro” and the place where they are staying at the moment, as well as tourist attractions that are near, and that is worth a visit.

The project has been implemented in Herzegovina, in the municipalities of Mostar, Čapljina, Neum, Trebinje and Dubrovnik-Neretva Canton, Konavle Municipality. Project duration was 24 months, and its holders were public company “Vjetrenica” Popovo Polje (Bosnia and Herzegovina) and the Municipality of Konavle (Croatia). Partners in this project were the Regional Development Agency – DUNEA, the Association for the promotion of cycling “Herzegovina Bike“, Konavle Tourist Board, the Tourist Organization of Municipality of Trebinje, then Čapljina Municipality, Ravno and Neum.

– About 80 percent of Ćiro’s route is the regional road, which is paved, and the rest was in poor condition. And, by that I mean underpinning and bridges on the section from Gabela to Ravno. We were able to restore five bridges and ten tunnels in which reflectors were installed due to the fact that we were not able to set up the lighting – said Ana Soldo, director of Public Enterprise “Vjetrenica”.

She points out that one tunnel is left out of the reconstruction project, because it contains a large colony of bats which are protected species.

– There we made a story that involves observing bats from the track so that this is also, in some way, another attraction – adds Soldo.

The project has already made a study of cross-border tourist offer along the route of the old narrow gauge railway “Ćiro” in which tourist potentials were identified, and measures to channel those resources in active tourist offer were defined. It was also applied for a continuation of this project – “Ćiro II”, and it anticipates sequel of the route to Herceg Novi in ​​Montenegro.

Cycling route is designed for both road and mountain biking, which means that the entire route length can be driven on asphalt, and some parts, which have the total length of about 35 kilometers, are macadam and those are going parallel to the paved route and mountain bikers can use those. The route includes crossing eight bridges, large and small, through which “Ćiro” used to pass, and the most famous among them is so called Sjekose viaduct over the Nature Park Hutovo Blato which was built according to the design of Eiffel, the author of the eponymous tower in Paris. Macadam route goes through 11 tunnels with a total length of more than one kilometer.

The initiative for the project “Ćiro” was launched four years ago due to the idea of ​​representatives of REDAH and Herzegovina Bike Association, since long ago people of this region wanted to do something to revitalize the railway, which was abolished in 1976. The initiative has been accepted by the local population and a project that aims to restore life in areas where “Ćiro” used to pass started, especially in the area of Popovo Polje where life died since the railroad was abolished.

In this respect, this project is of great importance for this area, but also for the entire Herzegovina since the remarkable expansion of cycling and cycle tourism in this area has been noticed. Until five years ago, there was no bike club, but now every municipality in Herzegovina has at least one registered cycling club, while in Mostar three clubs exist. There was also involvement of travel agencies in connection with cycling tourism, because this area is known for its beauty, but also a numerous cultural and historical attractions. The conditions for cycling are ideal in Herzegovina, in particular the climate, because in this area season of recreational cycling and cycle tourism can last 8-9 months.

– What is our desire at the Association of Herzegovina Bike is to brand Herzegovina as a desirable cyclotourist destination, and we believe that we’re on a good path- said Goran Prskalo, Secretary of the cycling club in Mostar.