The concept of man’s well-being implies his own sense of convenience, comfort, commodity and everything that makes him happy and gives him pleasure. A society in which happy people live is called a welfare society, and some of its key objectives are the provision of food, housing and work. When such a society is organized and united under the common political system, a state of well-being arises in which the need and deficiency become very important, because such a state is covered by the idea that all needs are met and that no one will miss anything.

The concept of “welfare state” obliges the state to guarantee citizens, not only elementary security and political rights, but also social and economic security. Such a state should take part in activities that should ensure that all inhabitants enjoy at least the minimum standards of life, health care, protection against unemployment, sickness, old age, inability to work. One has great expectations from a state with such a concept and these expectations have turned into ideals, expressed through hope that everything people expect will be available to them.

In this context, a direction of economic thought is explored, and it explores the theoretical principles, conditions and methods that the political community can achieve and increase the general well-being of its members, by encouraging development, as well as redistribution of income and burden between individuals and social groups. Economics, as a social science, undoubtedly sees man as a social being, studying the rules and skills of property management to achieve the greatest benefit with the smallest sacrifices. If by welfare we consider the fact that an individual or a society has more material resources, mostly money, in relation to the average, it is considered that individual or society, in the material sense, is missing nothing.

One can ask a simple question: is there a state of well-being, or are there modern countries that have come closer to this ideal? What can be found in available databases and various official publications are mainly macroeconomic parameters, on the basis of which the wealth of a country is measured. The only institution that focuses on measuring prosperity is the Legatum Institute. The research of this institute includes 96 percent of the world’s population and 99 percent of world GDP and is published in the “Global Prosperity Index”.

“The Global Prosperity Index” for 2018 shows that the first place is taken by Norway, followed by New Zealand, Finland, Switzerland, Denmark, Sweden, Great Britain, Canada … Croatia is the best place among the countries in the region at 41st place, Macedonia at 54th, Serbia at 56th, Montenegro at 58th place. It is interesting that Bosnia and Herzegovina was not ranked in 2018, and the last ranking was in 2015, when we held 86th position of 142 countries in the world.

Various criteria are used to determine the global prosperity index: economy, entrepreneurship and business start-up, public administration, education, health, security, individual freedoms, the environment and social values. Special attention is given to the social value system, which in a methodological sense reflects social cohesion and social trust, where the research directly examines which institutions, social networks and social relations are linked to the levels of well-being and the level of national income. The practice of societies with more prominent social capital show that they are more democratic, institutionally more stable and economically prosperous and there are rules that all respect. Creating a climate of trust in today’s constellation of economic relations and the dominance of a market economy implies that besides personal there is also a social interest, as a kind of moral obligation and a feeling for the community, where even in the conditions of the crude market, positive social effects are generated.

An analytical view of the ranking of social values ​​in Bosnia and Herzegovina from the period when it was on the list of the “Global Prosperity Index” shows that there is a lack of trust in society, and a lack of trust leads to the weakening of social ties and social cohesion. This has led to the transformation of the ideals of social advancement, which is now focused on political engagement and an option that will provide them with employment in the public sector and secure wages. Young people’s role models have become the stars of reality programs … Therefore, the existing distance from today’s situation in BiH to the state of well-being is high and to be reduced, much needs to be changed. To make changes a lot of work needs to be done and many things need to be learned, and there are examples of how to improve everything in the world. We need to learn from those better then ourselves … 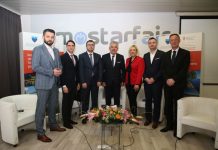 Hamo Račić, organizer of the work of travel health insurance and...