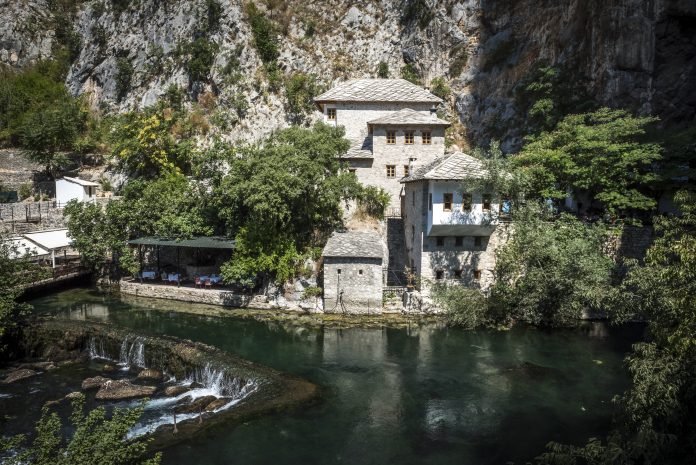 No story of the tourism and beauty of Bosnia and Herzegovina would be complete without mentioning Blagaj. This oasis of peace and natural harmony is located three kilometers from Mostar Airport. The greatest attention of visitors is attracted by the spring of the river Buna, where there is a mysterious building – dervish’ tekke, which is an important monument of culture from the early Ottoman period. Above it, on a steep rock, there is the old town of Herceg Stjepan Kosača.

In the middle of the peace of Tekke courtyard, chilled with freshhnes of beautiful Buna, you understand why Blagaj was the center of interest of prehistoric people, Roman nobles, Ottoman viziers and judges, Austro-Hungarian officers and many travelers eager to feel spring freshness, warmth of the sun and blue sky. For centuries it is a place of prayer and meditation. With its natural beauty, Blagaj leaves no one indifferent. It is visited by tourists from all over the world, and especially from the countries of the region.

Tekke is located in a beautiful natural setting. The spring is located in a huge stone mass, about 100 meters high. Buna springs “out of huge stone mouths with dark lips” – that’s how R. Michel expressively depicted it, and begins its course “in a lush spate whose cold breath is felt far away.” On the right side of the shore, the Tekke rises, partly below the rocky cliff.

In the beginning of the 15th century, as it says on a stone slab in its courtyard, dervishes built the Tekke. It was built on the site of an older Bogumil shrine, for which there are no precise data. The first memorial of the Tekke in Blagaj is found in “The Book of Travels” by Evliya Çelebi, who traveled through this town in 1664. He wrote that the Mostar mufti has built, along the cliffs of the Buna spring, a tekke of halvian order where dervishes conducted friendly conversations and scientific discussions.

This is a place where, by special rituals, dervishes performed – and today perform – the Dhikr (worshiping of God). Tekke in Blagaj belonged to various dervish ranks, first to the Bektashi Order, then to the Halveti Order and Qadri Order. Today, it is led by a vekil (deputy of Sheikh) of the Naqshbandi Order. This mystical building, the national monument of Bosnia and Herzegovina, is especially the treasure of Herzegovina, the jewel of religious tourism.

In Tekke there are two mausoleums covered with golden canvas, where, as it is believed, Sari Saltuk and Achik-basha were buried. Saltuk is a historical and mythical Ottoman hero, and there are plenty legends about how his tomb was built in Blagaj. According to one, which was told in Blagaj, before the darkness, the old man with a white beard rode through the town, on a white horse, in a green uniform with saruk. He went towards the spring.

People prayed late afternoon prayer maghrib, and the old man wasn’t coming back. Buna was big so he could not cross over, and on the other side there was such a slope that it is impossible to ride through the area during night. They were looking for him, but in vain. Then they conclude that he disappeared mysteriously, and they built a mausoleum and tekke there. About the second grave of Blagaj tekke, Achik-basha’s, there are not many stories.

Usually, it is said that Sari Sultak said: “After me, the Buna will give one one like myself. That one will be bare headed.”There are stories that it is customary to leave a bowl of water and towel in Tekke in the evening. In the morning, the towel is wet and the jug is empty and it is believed that they washed for the morning prayer.

Tekke in Blagaj is open to visitors throughout the year and in its beautiful garden, with magnificent view of the spring refreshments are served, tea and Bosnian coffee. Entrance to Tekke is charged 4 BAM for tourists and 2 BAM for locals.