Blue thread on a white background in the refined combination that simultaneously creates playful and precise geometric design, are the main characteristics of Zmijanje embroidery which was in 2014 inscribed on UNESCO’s Representative List of the Intangible Cultural Heritage of Humanity.

Zmijanje embroidery comes from the village Zmijanje on Mount Manjača, near Banja Luka. Alongside the Old Bridge in Mostar and the Mehmed Paša Sokolović Bridge in Višegrad, which are on the list from the time of Yugoslavia, inscription of Zmijanje embroidery on this prestigious list was the first when it comes to intangible heritage of Bosnia and Herzegovina.

Creating Zmijanje embroidery requires high concentration, but when it comes to techniques, it is a cross-stitch, traditionally one cross next to another. Authentic carrier and most deserving guardian and master of Zmijanje embroidery is a woman from Banja Luka, Radenka Jungić who took this embroidery 18 years ago out of a book, under the dust, and began to make embroideries.

She has been awarded the Gold Medal for the Arts of high value on EUREKA 2011 exhibition and the Order of second order for creativity at the same exhibition in Brussels, and this year she received a plaque of the City of Banja Luka for outstanding achievements in the field of culture, tradition, and cultural heritage protection. 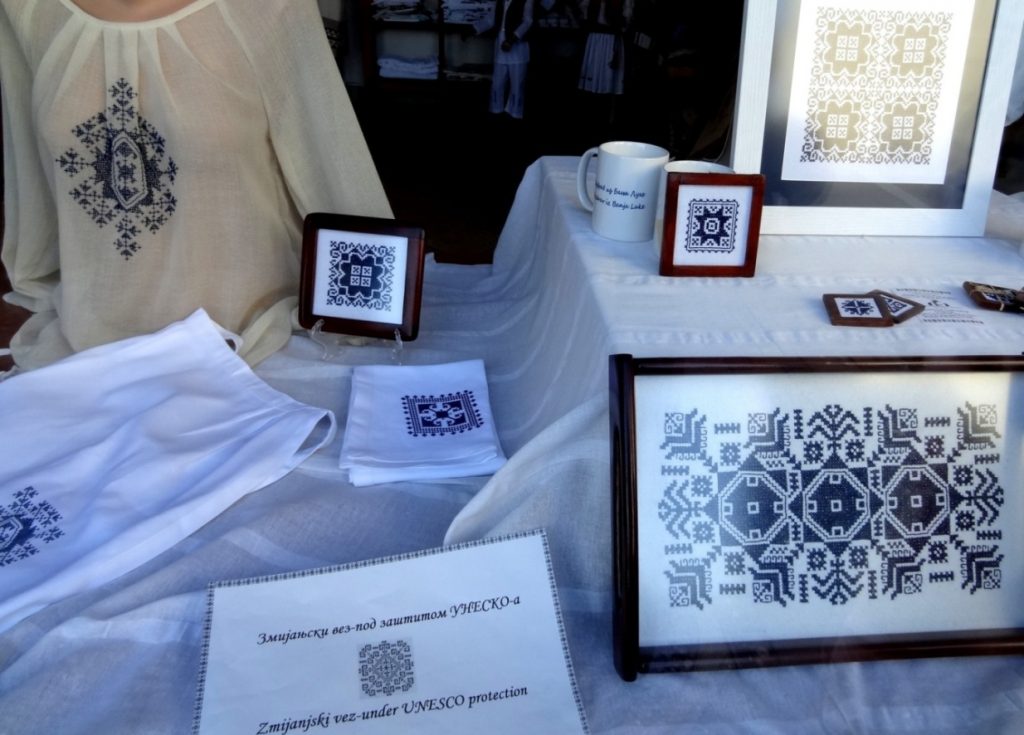 In her work, she consistently uses blue ties with original ornamental compositions using motives of the cross, apples, and branches that are typical for Zmijanje embroidery from the end of the 19th century until today.

She says that in 1999, she felt the need to show the world the exceptional value of blue embroidery from Zmijanje. After 14 years of dedicated work on creation of this ornament, ethnologists of the Museum of the Republic of Srpska addressed her, with them she collaborated to put Zmijanje embroidery on the candidate list of UNESCO, and her works were enclosed as a proof that this embroidery is still living.

Today, the most beautiful examples of Zmijanje embroidery are spread throughout the world from religious centers like Hilandar, Vatican, Jerusalem, to capitals such as Brussels, Moscow, London, Athens…

Jungić is especially proud because during the visit of Pope Francis to Sarajevo, in June 2015, the Presidency of Bosnia and Herzegovina handed the Pope her unique image “Plavi vez sa Zmijanje“ (Blue embroidery from Zmijanje). This work of art is in the unique authorial version of a filigree embroidery with extremely thin strands of thread in gold and blue. 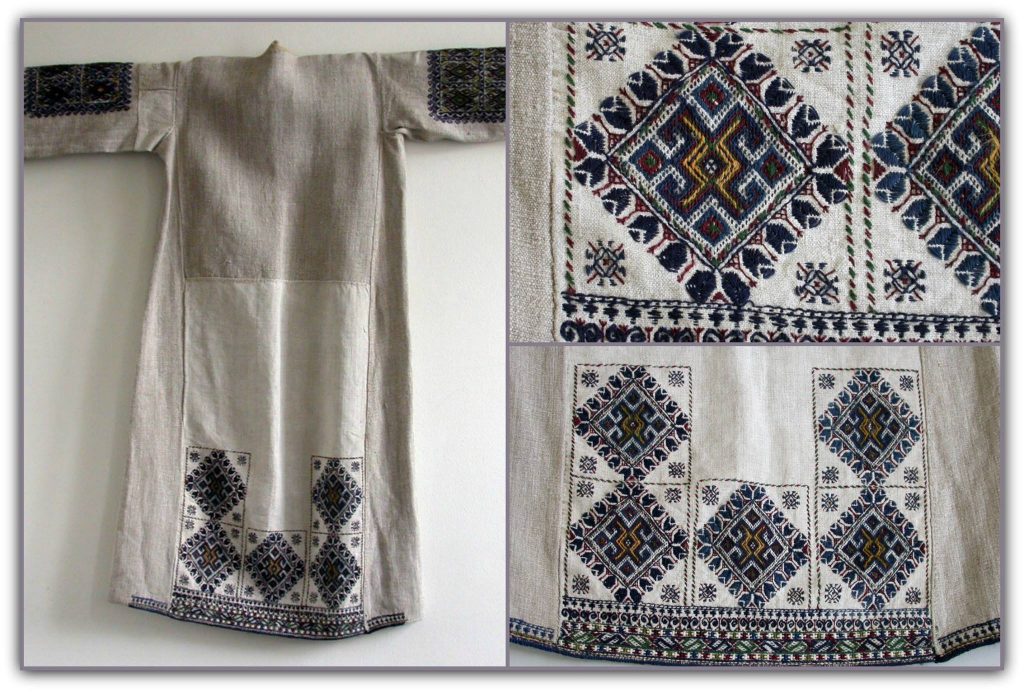 – The gift was designed and manufactured for this occasion specifically. It is unique and it represents a symbolic combination of tradition, peace, and natural harmony. The ornament itself is an original and geometrical composition of very recognizable substantive symbolism, framed by wild cherry with inlay of dove in gold – it is stated in the monograph made for the occasion of the Pope’s visit to Bosnia and Herzegovina.

Besides the Pope, unique gifts with Zmijanje embroidery made by Jungić have actress Monica Bellucci, academician Matija Bećković, writer Rajko Petrov Nogo, composer Arsen Dedić, Gabi Novak … Jungić recalled the beginnings and how in 1999 she left her job in marketing to dedicate herself to this embroidery. 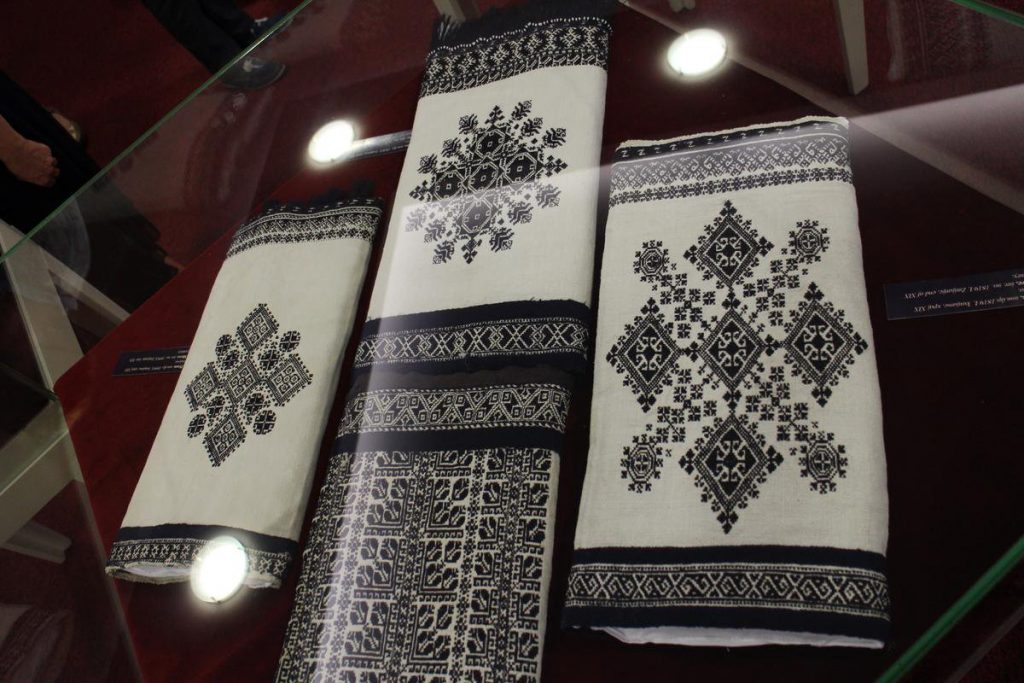 – For ten years, I barely told anyone what I was doing. In these beginnings, UNESCO’s recognition was not even in my thoughts. I simply recognized the value of embroidery and felt a strong need to show it to the world because I knew how essentially valuable it is. In 2009, I made the first exhibition in Banski Dvor in Banja Luka. I think that it is not good that Zmijanje embroidery is more valued only because it is on the UNESCO’s list. In my work, approach, and evaluation, nothing has changed. Any commercial versions do not interest me, but as an author, I’ll never make any abuse. These are fine, subtle, and delicate areas in which such a thing must not be allowed – explains Jungić.