There are few bridges in our country that can be compared with the beauty of lines and the imagination of shapes of this specific bridge. The Višegrad Bridge on the Drina is much larger and for the economic history it is much more significant, the famous bridge on the Neretva River in Mostar is visibly braver in construction and slender as a rainbow, but the one in Trebinje is more harmonious, richer in shape, more picturesque. In the history of our construction, it has a very prominent place and special importance in the Balkan architecture of the 16th century. This is how Arslanagić Bridge has been described by Vojislav J. Đurić in the Belgrade Daily Newspaper Politika, 50 years ago.

Hardly anyone before and after him has found more beautiful and more suitable words and contributed more to the general public’s appreciation of the undoubted cultural and historical value of the Trebinje Bridge, and perhaps even more so – the incentive for the decision to keep the bridge from decaying at the bottom in those years when artificial hydro-accumulations have been built. It seems to us that everything has been said and written about the oldest bridge on Trebišnjica from then till today, it seems to us.

The construction of the Arslanagić’s Bridge over Trebišnjica River, according to the records in the Dubrovnik archive, began in 1568 and ten local builders were engaged in this work. The bridge was built by Mehmed-pasha Sokolović and opened in 1574. 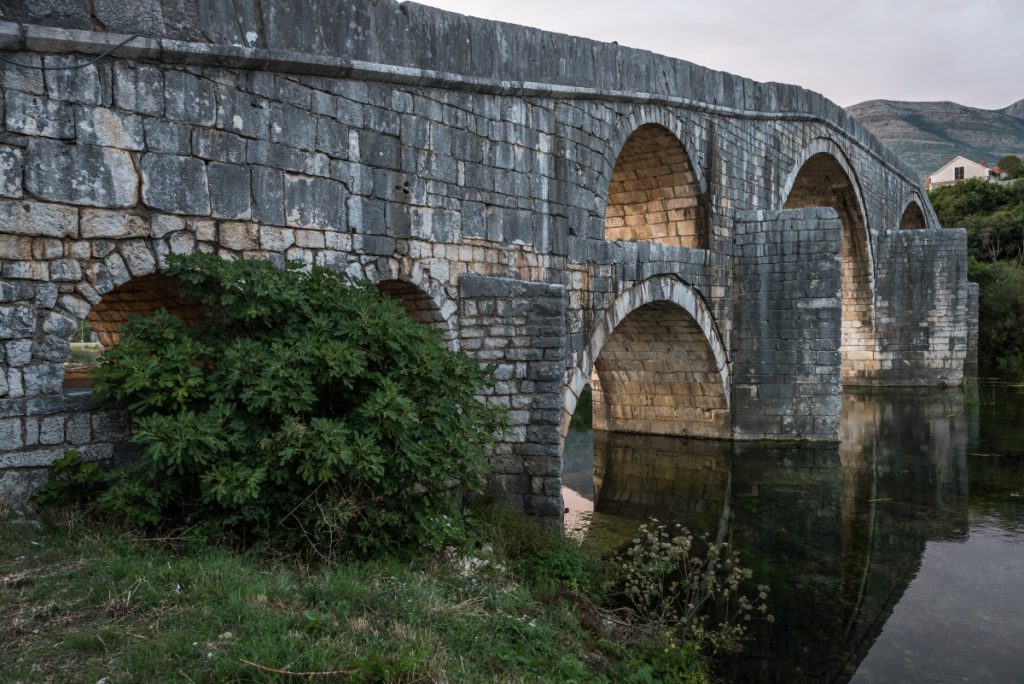 The bridge connected central Bosnia and Novi (today’s Herceg Novi in ​​Montenegro, then part of Bosnia within the Ottoman Empire). Almost total trade was happening over this bridge, mostly salt. In 1687, the Venetians captured Novi, which caused the withdrawal of the wealthy Muslim population towards Trebinje, and the bridge lost its significance. This was also influenced by construction of roads towards Dubrovnik. One of the Muslims from Novi was Arslan-aga who was given the task of charging crossing over the bridge, and he constructed his house right next to the bridge. In time, the whole village, called Arslanagići, arose there, and the bridge began to be called Arslanagić’s Bridge.

At the end of the Second World War, specifically in 1944, Chetniks tried to demolish the bridge. During the explosion only the left wing of a bridge, about eight meters long, was destroyed, which after the war was replaced with a narrow concrete line.

The second damage to the bridge occurred in 1965 when the authorities decided to make a reservoir lake Gorica at that place, for the needs of the hydroelectric power plant. The bridge was submerged for a year and was lying under water. After a discharged of the artificial lake, for two months, in 1966, the bridge was dismantled, stone by stone, and it was standing in the nearby field. The project of reconstruction of the bridge was made by the company Energoinvest from Sarajevo.

However, in 1970, relocation began and after two years of arranging (the stone blocks were marked with numbers and transported by boats), the bridge was reopened, this time a few kilometers lower, in Trebinje settlement Gradina. The village of Arslanagići is mostly flooded and there are only a few houses above the lake level.

Change of the name

The rule is that displaced bridges cannot be found under the protection of UNESCO and therefore Arslanagić’s Bridge does not have such a status.

The new epilogue around the Arslanagić’s Bridge came in 1993 during the war in Bosnia and Herzegovina. Namely, by the decision of the then mayor of Trebinje Božidar Vučurević, the name of the bridge was changed to Perović’s Bridge, allegedly claiming that Arslanagić family became from the Perović family. He also changed the name of the village to Perovića Most. 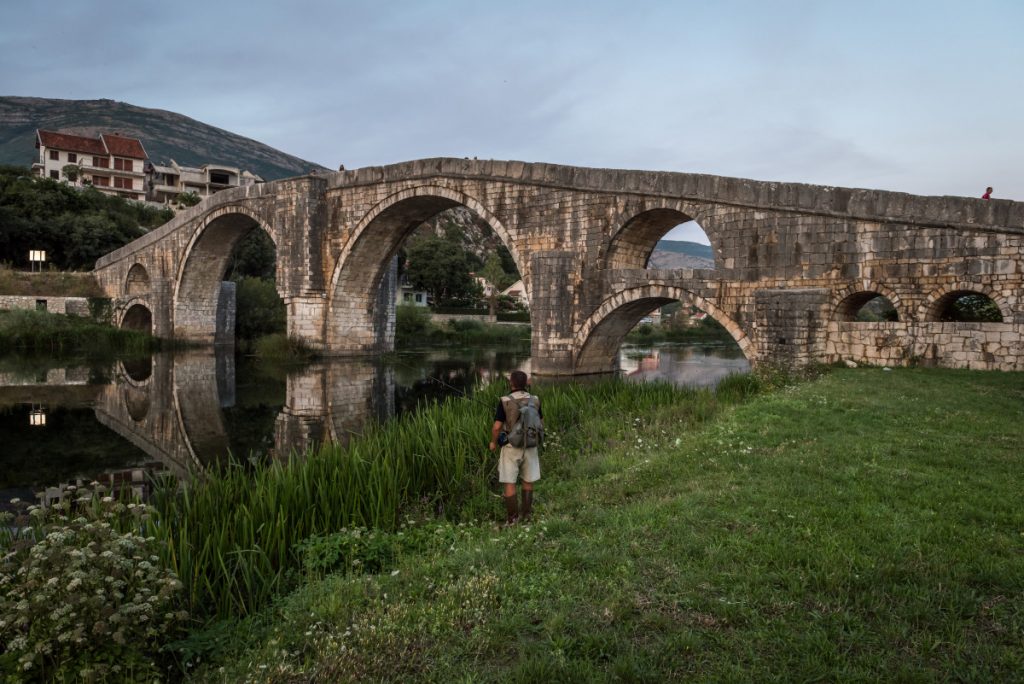 Today, the name of the bridge and the village has not been changed, but people still call it by its original name – the Arslanagić’s Bridge. It was proclaimed a national monument of Bosnia and Herzegovina.

The bridge is 92.25 meters long and the width of the carriageway is 3.6 meters. The massive stone bridge construction consists of two large and five smaller vaults, and three river pillars. The large vaults reach 15 meters in height from the normal water level of the river. The sides of the bridge are enclosed with stone slabs.

The bridge is constructed in way that a strong central pylon, about 3.6 meters wide and about nine meters long, dominates. Between the central pillar and offshore structures the ranges are roughly equal. These ranges are divided by secondary pillars in an approximate ratio of 1: 2, so the range toward the central column is twice the range between the coastal structure and the first pillar. On the Arslanagić’s Bridge above the middle pillar there was a stone masonry guard which was removed in 1890.

The western gate of the City of Sarajevo: Roman Bridge that was...