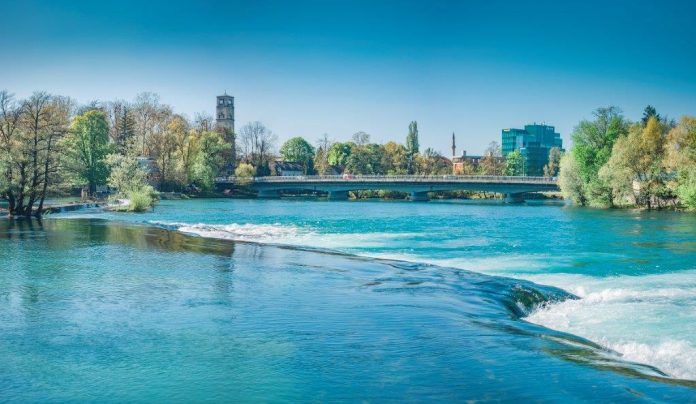 Bihać – a historical place in the north-west of Bosnia and Herzegovina was mentioned as far back as 1260 in the writings of the Hungarian king Bela IV. Two years later, the latter declared it a free royal city, with the right to free trade, the construction of administrative buildings, churches, it was surrounded by walls, kings stayed there and travelers wrote records about it.

It has its own army, its own captains, its own coat of arms and seal, and is in the full sense a city. A city of fortresses that would later stop the Turks advance to the west. With the fall of Bosnia in 1463, Bihać did not fall and will be free for another full 129 years.

Not far upstream from Bihać is Ripač, the cradle of civilization, on the islands. It could be that it was just like this when along the banks sat Japod´s stilt houses. They couldn’t have found a better place on Una than these waterfalls. If Ripač were to be taken from Una, it would be like taking a crown off her head. People used to ride horses along and down the Una, fought in battles, hunted animals, and fished on the Una.

They appear to us from their ancient past with the pictures they painted of themselves, and if they hadn’t painted themselves, we wouldn’t know that the Japods lived there from the Stone Age until the Romans. Some say they are Illyrian, others claim they are of Celtic origin. They carved their history in clay and stone. We see from the pictures of horsemen and warriors that these people were angry warriors.

Even when they were finally defeated, those old Japods did not agree to be slaves, nor to fight. Only in a few cemeteries around Bihać, Pritoca, Ribić, Crkvina, Ripač, about 1,000 Japod graves were excavated and tens of thousands of objects, dishes, jewelry made of bronze, iron, silver and amber were found, which means that the old Japods loved to adorn themselves.

There is only one river in the world that stands out from all the others by its name, the one, the only, unique Una. The Romans must have admired the beauty of that water and gave it a name from their language, from the Latin “one”. The one who first gave it that name must have been a poet, because that short word itself is poetry.

It took a unique moment, an unrepeatable feeling, so that rhyme of the Roman poet slipped from the heart. Una – and no one has ever sung a more beautiful song about that water. It is a cold water unlike Sana, which is warmer. It is a slow water unlike Vrbas, which is our fastest river. It is a clear water unlike the muddy Sava. It is gurgling water, jumping from stone to stone, from high to low and deep. Then it no longer gurgles, whispers, but bursts, rustles and roars as if the winds are breaking the mountain. Because of its roar and noise, the most beautiful waterfall on the Una got its name. Located near the villages of Gornji and Donji Štrbci, it is called Štrbački buk. It must be here, next to these beech trees, that the old Japods fell in love with each other.

The old Slavs and everyone who was splashed by this waterfall with its drops. Una wouldn’t be Una if she didn’t have a waterfall brooch in her necklass around her neck like Štrbački buk. Here we seem to see best how small man is in front of the majesty of nature. This whole area is full of travertine, which the water has built up, making a way for itself to jump over it when it wants to. She dives into depths and emerges from them to play.

Other waterfalls on the Una, no less magical and spectacular than Štrbački buk, are closer to the spring, and it is not known what its original name was. Since, not so long ago, it was called Martin Brod. It took that name from a girl. Once upon a time there was a girl Marta who fell in love with a boy. So when she went to go accross the water and come to her lover, the waves carried her away. Not to the boy, but from him – forever. She did not cross the water but drowned in it. After her, this place was named Martin Brod. Waterfall belonged to Milanče, whether Marta was in love with a certain Milanče is uncertain.

Legend says so. There, the rainbow looks like a bride’s veil over her head, and the stones are like wedding guests, her two young brothers-in-law are represented through two waterfalls, and the rapid is her sister-in-law. That’s what the wistful will think, and others will watch the stage where the water plays its game.

There are many cities and towers surrounding Una. Those old, now sleepy cities were built for the capital, for Bihać, to defend it. Sokolac; its name comes from „falcon-soko“! It is high, on the ridge of a rock that is scary to look at. Clouds and crows will fly over it. Until recently, we could only reach it with our eyes. Now it will be covered by drones, planes and other aircraft. Once in the possession of the powerful Frankopan princes. It is renovated, accessible and the right place for exciting moments. It’s a medieval town, with a defensive tower like in a schoolbook.

This is how the town of Sokolac squats on the Una, above Bihać, and the town of Ostrožac, lies bellow Bihać. It’s not just those two or three towns, there are more in Pounje. Una seemed to wall herself in those old walls. It is on the left bank of the river, on a steep and sharp spur, hence the name Ostrožac. A castle in the true sense of the word, which has been extended and expanded over the centuries. It was preserved and, thanks to Isabella, the wife of the Bihac district chief Berks, it also got a romantic castle – the only one in our country. Vladimir Nazor, when he came there with the partisans, wrote his notes in that castle.

Today, sculptors make their art there. Gallery under the open sky. Throughout the past, Bihać was the toughest town in Pounje. It was surrounded by walls, on which there were watchtowers, all around surrounded by water, and in the middle, there is a tower. Noblemen, captains lived in it, hence the name “Captain’s Tower” – later, during the Austro-Hungarian occupation, it was turned into a district prison. Everything had multiple functions in Bihać.

Fethija – used to be a church, so it was transformed into a mosque by alterations, demolitions, and additions. So, they took something off, and put something on, depending on what the third party wanted. Thus, its stitches remained to this day, which is why this antique is interesting. Fethija is a national monument of Bosnia and Herzegovina.

If it wasn’t the river, if it didn’t flow, Una would have stopped here in Bihać to see the many heroes who stopped by and acted in it. History was being made in Bihać. From Japod, Roman generals, medieval kings, bans, pashas and viziers, to the First Session of AVNOJ and up to the present day. Bihać preserves its pride. The entire region of Bihać is one museum. The most important is the Una-Sana Canton Museum, which inherits the museum tradition and awareness of culture and history from the first days.

We are the happiest nation in the world, we have something to show, we have something to brag about, we have a lot to tell… It takes a lot of time to visit all the natural and cultural-historical sights in this capital of the Una-Sana Canton. At every corner lurks an interesting detail with an even more interesting story. There are few legends, but there are many more historical facts and values ​​that make this city and its surroundings special.

Una – if it wasn’t water, she would stop to see all that, she would stop to see the new, modern Bihać, while many visitors from all over the world approach it from all sides. Never enough for the eye to glimpse Una, never enough for the ear to listen to Una, neither for the poet words for her, nor for the painter colors, because this water “runs away”…

She is a doe in the mountain. He does not walk calmly, but restlessly like a young colt. Sometime, after she gets tired and breaks down the falls, she lies down on the bed and then it seems that she is not even breathing. She is old and young at the same time, as old and young Grmeč is behind her and Bihać on top of her, and it seems that every moment she is clearer and more beautiful. It looks like she is washing herself. Una splashes Bihać and makes it happy, it spills and rustles around its feet. It seems that she tells him a story at night, so that he can fall asleep. Come and fall asleep after an exciting day in Bihać and its surroundings with the sound of the Una. Welcome.