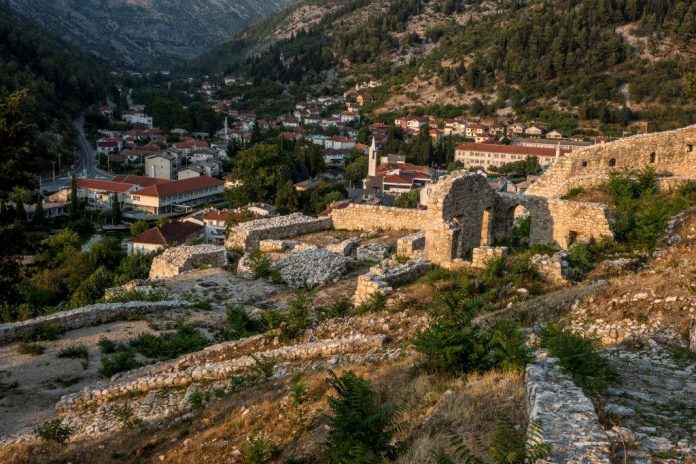 The continuity of the presence of the human community in the Stolac area dates back to 16,000 years in the past, and given that the climate there is mediterranean, all kinds of fruits, mostly grapes, are present there. Places surrounding this area, like Badanj Cave – a Paleolithic habitat where drawings with hunting details and a clear image of the horses were found, the fortified Illyrian city Daorson, which provokes admiration with its cyclopean walls, and the famous necropolis at Radimlja with its stone sleepers, Boljuni, Rotimlja and Vidoštak as well as the fortress of Stari grad itself. There is also the grave of the Jewish rabbi Moshe Danon. That place was and remains one of the Jewish shrines. Monuments, mosques, squares and churches, the libraries were built during the Ottoman period. Later, the features of the Mediterranean culture complemented these buildings.

The name of the settlement has undergone a change in history. The oldest name is Daorsoi, or Daorson, an Illyrian megalithic city in the village Osanjici above Stolac. Roman Dilluntum follows.

Stolac was first mentioned in written sources on May 7, 1420. For now, this is the birth certificate of the name of this city. The first known inhabitant of Stolac is a certain Gojak Tihosalić, who was engaged in cattle breeding. The document is in the State Archives in Dubrovnik. Its content is as follows: “Milien Budečević before Dubrovnik Duke Nikola Pucić raises a lawsuit against Vučihna and Stjepo Vlahović from the settlement Vučihna Vlahović because, in those days, in a place called Stolac, they took away three cows and oxen, which Milien had to take care of and breed at the estate of Gojak Tihosalić from Stolac”.

The successor to Gojak Tihosalić could be Vukmir Gojaković who is mentioned at the end of May 1436. Mentioned as a person from Stolac in Vidovo polje, Vukmir Gojaković then committed himself to the seven-year service with the Dubrovnik weaponry Antolin Obradović.

The town was founded on the banks of the karst beauty Bregava River, surrounded by mountains Hrgud and Vidovo Polje and places of the rich cultural past. On the west side is the Dubrava plateau, which is specific and famous for the peach and vineyards.

With its Mediterranean charm, good water, mild sky, gentle landscape and harmony of natural beauty, Stolac has attracted people from prehistoric times. Illyrians and Greek sailors, Roman patricians, Eastern Gothic and Ottoman conquerors, Slavic dignitaries, Venetian troops, Austro-Hungarian rulers, and many worshipers of the sun, the freshness of the river Bregava, cultural and historical sights and mysterious messages from the past centuries that left their mark here.

This quiet, sunny place in the southeast of Bosnia and Herzegovina, full of amazing Ottoman architecture, is a true treat for those interested in anthropology, archeology and history. No other city in Bosnia and Herzegovina gave so many intellectuals, artists, poets and leaders. As you walk through the Stolac and listen to the fast Bregava and the tweet of many birds, you realize what inspired many generations of outstanding people from Stolac.

This is an extraordinary place to walk, taste home-made wines, figs or desserts that grow here in every yard. This is also a great base for further exploration of this region on a bicycle. The city center is full of lush trees, with unique pine trees stretching to the sky. Not far away is the ancient Old Town fort Vidoška, ​​built in the 14th century.

For lovers of Ottoman architecture you can see the Sultan Selim-Emperor’s Mosque (16th century), the mosque in Uzunovići and on Ćuprija (17th century). It is also an interesting complex of oriental-residential architecture known as Begovina (19th century).

Stolac is also known for the mills that have a strong tourist potential. There are 12 mills in Bregava. They all stopped working in the fifties of the last century, because of the rapid economic development of the city, there was no longer any interest in mincing grain or washing woolen clothes in the constructions next to the mills. They are ruins now due to non-use, and they suffered additional damage in the past war. Today, its owner, Ihrahim Batan Buzaljko, restored only one watermill and four more are partially renovated with the money of the European Union.