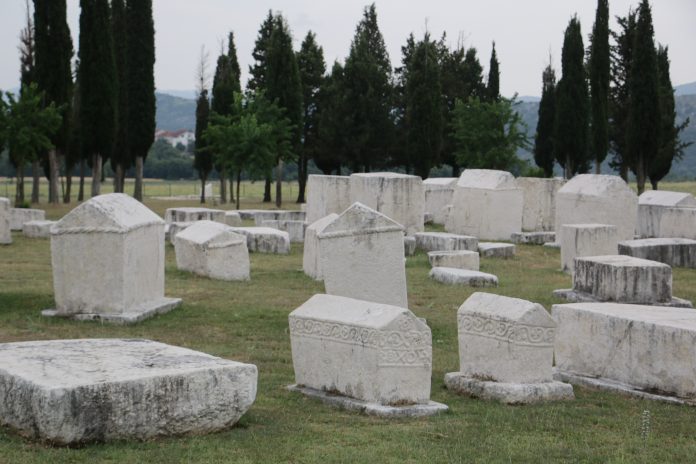 Radimlja, a necropolis of tombstones called “stećci” is one of the most valuable monuments of medieval period in Bosnia and Herzegovina. It is located in Vidovo polje (Vido’s field), three kilometres west of Stolac, on the Čapljina-Stolac road.

This is one of the most valuable and the most significant “stećak” necropolis in Bosnia and Herzegovina, due to the number of tombstones, a variety and a representation of all basic forms, a relatively high artistic quality of production, their richness of plastic decorations, relief performances, inscriptions that are mentioned by famous historians and unusual placement of their artwork.

When you travel towards Stolac you will see a field of white regular forms on the right side of the road. The employees of the Radimlja public institution will welcome you and explain the historical importance of the necropolis. “Stećci” are a universal phenomenon closely related to medieval Bosnia and Herzegovina, and we can say that Radimlja is the most famous “stećci” necropolis in the world.

There are 133 “stećak” in Radimlja, and the necropolis is divided into two parts. There are 122 tombstones in the lower part, and there are 11 tombstones in the upper part. Radimlja is a true tourist destination in Stolac, and every year this necropolis is visited by many foreign and inbound tourists. The “trademark” of this necropolis is a male figure with a raised hand and a relative large fist and fingers. This necropolis dates back to the end of the 14th century when the three large stećak-shaped caskets were carved. Most of these tombstones dates back to the 15th and 16th centuries, and the most reliable proof of it is one of the inscriptions:

According to this stećak, the necropolis can be linked to the period when the Hrabren-Miloradovic family lived in Batnoga (today the nearby Ošanjici village). The names of the Duke Stipan and Petar Miloradović are inscripted in the front of the church in Ošanjici, which makes the necropolis closely related to this family. According to historical data and inscription at the entrance to the church, this family lived here in the 15th century.

The last tombstones in Radimlja were made in the 16th century are lavishly decorated, and the inscriptions on them imply that they are about the Orthodox feudal family Miloradovic-Stjepanovic.

There are more than 1.950 stećaks in this area and they are untold, infinite fortune, along with four city mosques, Catholic church, Ortodox church, monuments of oriental architecture and other monuments.

The complete water supply system in Stolac was built during the Austro-Hungarian period and it is still in use. There are buildings from the period of the Secession as well. The old urban city of Stolac, the magic part around Sultan Selim mosque, the stećci necropolis in Boljuni and many other sights are just a part of what this Herzegovina town is renowned for. The youngest ones visit the necropolis in school excursions.

Last year Radimlja “stećak” necropolis, along with 21 other necropolises in Bosnia and Herzegovina, is included in the UNESCO World Heritage List.