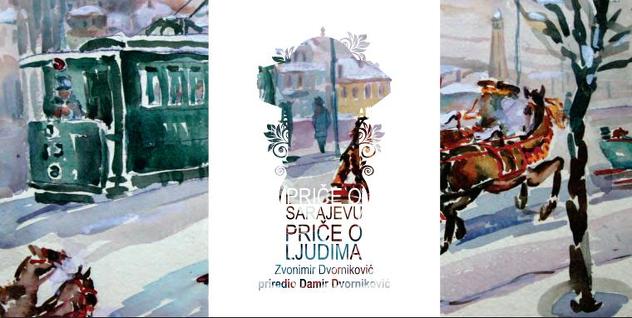 Aquarelle works in which old Sarajevo breathes and lives, the magic and beauty of a long past time, are “captured” between the covers of the monograph “Sarajevo, stories about people”.

Zvonimir Dvorniković created paintings in this little city scrapbook many years ago. He was a judge by profession, and by his commitment a lover of every day we live in. Zvonimir was born in Zemun in 1898, and when he was two years old, he moved with his family to Sarajevo and spent almost his whole life there.

– A passion for painting followed him to the last day. He died in 1986, leaving behind a multitude of vivid paintings that make a harmonious and romantic story about the former life on Sarajevo streets – his grandson Damir says.

Noise from Podtekija, murmur from Grbavica, silence and smell of Trebević, and the eternal energy of the River Bosna’s spring. Places where people know each other. Warm stories that connect some ancient and these days.

– Every painting is dedicated to dear people and things around us, everything that this little city has embroidered into us, our memories and the lives we live today. I would like this book to touch those who will go through its pages, the people we love to meet on the street; people similar to those painted by Zvonimir, those with whom he shared days and hours and dedicated his aquarelle works to. I remember days when I was just a boy; back than my grandfather always had his easel in front of him, many papers around, pallets, brushes, many cups with colored water inside, an unavoidable bowl with slices of peeled apples on the table – says Damir.

Zvonimir Dvorniković painted Sarajevo as he saw it, he painted its most beautiful face. Damir’s friend Nina describes this beautifully:

“I saw vividly every corner of Sarajevo in some long gone period. It’s almost possible to hear the piano chords and gentle sounds of sevdalinka, hoch Deutsch and typical Bosnian with a lot of oriental words. In front of my eyes, there are stone city gates, pigeons around Sebilj, dilapidated bridges and modern taverns, new buildings in secession, and adobe chardaks (typical old house in Bosnia). Somehow, the voice of telal (town crier) from one side of the wall is interwoven with melodious Spanish language carefully cherished among Sephardi Jews. Moreover, you can see the flames in Baščaršija, the Ramadan cannon is heard, the heels of perfectly dressed women of the Emperor Franz Joseph are heard as well. There seems to be no such harmony among the differences anywhere on the planet, as in Sarajevo. Such a testimony of a time knitted according to a human being can be left behind only by someone full of curiosity and love of life, his city and his fellow citizens.”

Each year, the archbishop led the Catholic procession on the Corpus Christi Day with the entire clergy and important government officials, along with the prominent army commanders and generals.

Both secular and religious schools were attending this procession, various catholic societies with their flags bearing their coat of arms, female societies, and society of stewards, Catholic husbands, Choir of Veterans, monks, friars, Jesuits, Sisters of Charity, the black and the white robes all together.

There was a special place in Sarajevo, intended only for the traveling circuses to settle on whenever they would come to the city. You could see a carrousel, a shooting gallery and all other sorts of amusement. The most popular were the elektrokino, the goller and the thaumatograf barracs, the joyful sounds of vending machines, a pleasant melody of the piano played nearby and a lot of unmarked benches and chairs. Numerous audience was always curious; children, students, apprentices, soldiers…

A Wedding Reception at the Quay

The wedding attendees are driven down the quay along the riverbank. The sheer number of the carriages in the wedding procession ads to the festively appeal of the wedding itself.

The owner of the carriage-business, Mr. Saračević, best known for his long feather attached to his hat, drove personally for a higher cost rate. Dressed in a shiny traditional Bosnian suit, he would rush down the street in his carriage during the summer and during the winter period in his decorated sleigh. The tram was also going along the riverbank.

Marija Šestić: I always knew that I would make music my...

Džeko Hodžić: It would take 300 years for me to paint all...