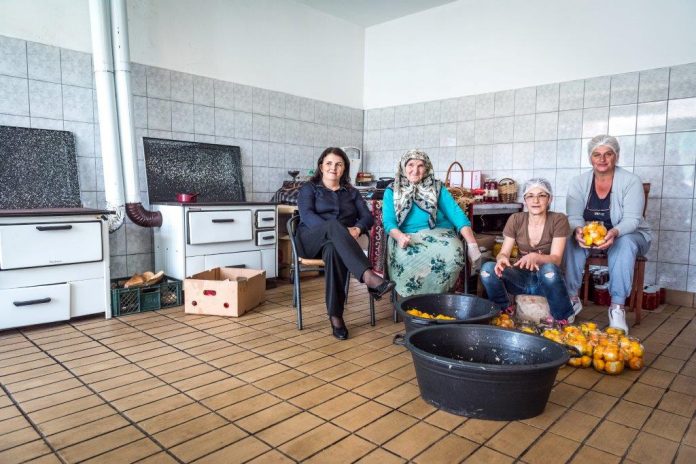 When, after the aggression against Bosnia and Herzegovina, Jasmina Sahovic returned with her family to the village Filipovići near Ustikolina, she did not realize that her original idea of growing fruits and vegetables for her own needs would spread beyond the borders of our country.

Today, 12 years later, jars which are hiding delicious delicacies of top quality, and which are created according to recipes of hard working women from Ustikolin, are well known in our country.

In addition, Jasmina says, everything began in 2005 with the visit of representatives of the CEFA humanitarian organization who, visiting the returnee villages, tasted the food offered by housewives.

– They tried jams, cookies, ajvar, salads … but the Italian Paul Bolsecini especially liked slatko made of peeld plums (slatko – desert topping), so he sent one jar to the headquarters of the Slow Food Foundation for Biodiversity, a world organization that protects typical local products. They were delighted with the taste, so in 2004 they sent representatives. Me and four other women from Gorazde agreed with them to come to the organic food fair in Turin and present this product. We took 500 jars to Italy, and returned home with empty boxes. We sold everything, because the product was very pleasing to the visitors of the fair – says Jasmina.

Shortly thereafter, the Association called “Emina” has been founded in Ustikolina, which today gathers ten women. The cooperation agreement with the Slow Food Foundation for Biodiversity, which was then signed, is still ongoing.

Jasmina reveals that from 400 certificates that the Foundation awarded to producers of organic food in the world and thus protected these products, two are in our country – for slatko made of peeled plums from Ustikolina and sack cheese from Nevesinje.

We learned that each member grows fruits and vegetables, and then from these fruits, in the traditional way, they prepare salads, ajvar, jams, juices …

-We breed everything, and our most popular product is red pepper, used for making ajvar (relish made principally with red bell peppers, with eggplant, garlic and chili pepper, predominantly popular in the Western Balkans), then eggplant, carrots, parsley, garlic, tomato, cabbage. We also use peppers to make various salads, tomato sauce, ketchup, we make sour cucumbers as well – Jasmina is making the list, while making ajvar on the ground floor of her family house in Ustikolina. One part of her house has been turned into the headquarters of the Association, as well as working space for the preparation of winter delicacies.

Although she is a master for a sweet delicacies, she says that this year is one of the worse due to a very cold past spring and summer drought.

– We didn’t have much fruit this year, plums almost did not appear, so we made minimum of sweets. Of course, we used what we had. Two summers ago, we made the elder and rose juice that we grow ourselves, jam and juice of cornelian cherry and apples, jam and juice of raspberries, and when we have plums, we make jam, juice, slatko – explains Sahovic.

Jasmina’s working day starts at about six in the morning, and ends late in the evening. It’s like this from March until the beginning of December. We are grateful that last year we filled 1,500 jars of paprika filled with cabbage, 2,000 jars of jams, between 1,000 and 2,000 jars of slatko… January and February are for resting, but also plans to expand production and increase quality.

-If you want everyone to praise you, you must constantly work. There is always something to be done, and the demand for our products is, thank God, excellent. People simply, as time goes by, turn to a healthy diet – says Sahovic.

Foods prepared by the members of this Association have so far visited many fairs, cities and countries. From Italy, through France, Bulgaria, Albania, to Croatia, Macedonia … As a gift to the family and dear friends magic jars arrived to America and Australia. They care about the quality of the products on a daily basis by sending samples regularly to analysis.

-We take care of everything, which means that the seeds we put into the ground must be natural, autochthonous, ours, from this area. We do not work on the principle that if this year we did not have our own fruit, we go to someone at the marketplace and buy. For example, we buy plums, make jam or slatko, and then we sell it under our label. This is not what we want, and that is why people recognize and appreciate us – says Shahovic.

Wonderful lakes of Bosnia and Herzegovina