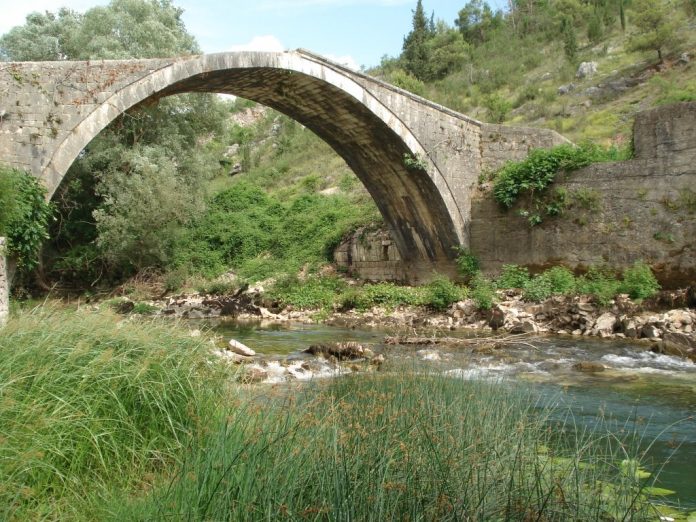 In the treasury of cultural and historical monuments and nature parks in the municipality of Čapljina, made up of Hutovo blato, the waterfall Kravice, Mogorjelo, Počitelj, the remains of the ancient city of Gabela, the old bridge in the settlement Klepci takes a significant place.

This stone bridge, which was proclaimed a national monument of Bosnia and Herzegovina, bridges the river Bregava for 497 years. It is the construction work of the Herzegovinian Sanjak-bey Mustafa, whose name is written on the panel together with the year of construction, 1517. According to the builder, this rare building is named Mustaj-bey’s bridge.

In the second half of the 17th century the bridge in Klepci was restored by Shishman Ibrahim Pasha, who restored the mosque in Počitelj and built the medresa, han and hamam. As this gem of Ottoman architecture glistened on the route of the roads from an earlier period, it is believed that there was a Roman bridge in the same place.

With a harmonious construction of the vault, which resembles the arch of the Old Bridge in Mostar, bridge in Klepci represents one of the most important works of Ottoman construction in the field of infrastructure facilities. Although today it has remained outside of modern roads, this building captures the attention of many visitors with its beauty.

The specificity of this bridge is that it has the largest range of this type of bridges on the plain rivers. Since the river bed of the river Bregava is relatively wide at this place, and the shores are narrow, the builder has taken out larger stone pods and formed a long access ramp, reducing the range of an arch.

Construction of this stone pearl above Bregavov is connected to a series of legends, and one of them says that the girl donated her dowry in order to get the builders finish the construction.

– Only when beautiful and young bride left her gifts and disappeared without trace, Bregava retreated into its bed and the builders could finish construction of the bridge – says the legend.

City Hall – A symbol of the encounter of civilizations and...