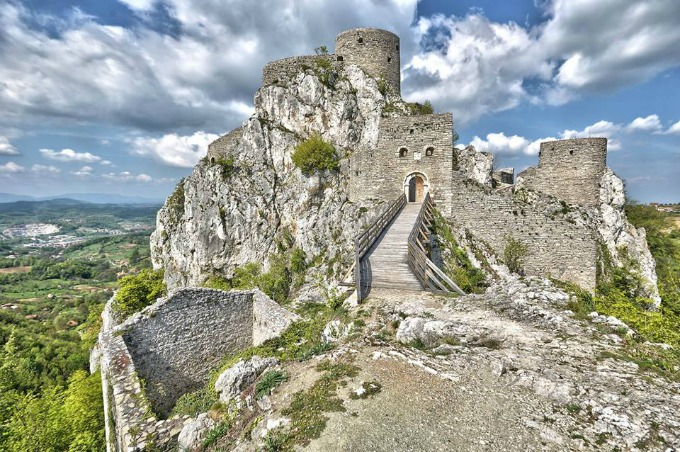 In the first centuries AD, the area of ​​today’s Bosnia and Herzegovina was part of the Roman Empire. It was mostly inhabited by the Illyrians. After the fall of the empire, Byzantine Empire, and the Western heirs of Rome claimed Bosnia. The Slavs settled here in the 7th century, finding in these areas parts of Illyrian and Thracian tribes that were romanized, and upon arrival of the Slavs they retreated mainly in the mountains.

Slavs call them Vlachs according to old German word Wallach, which means Roman. In their ethno-genesis, Bosnian Slavs – Bošnjani (Bosnians), later Bosniaks or Bosnian Muslims, as central South Slavic people, mingled very little with other nations, which is not the case with the surrounding South Slavs, in whose ethno genesis the share of non-Slavic element is quite significant – in the east Greeks, Albanians, Aromanians, Romanians, and others, and in the west Germans, Italians, Hungarians, Czechs, and others. Opinion of majority of Croatian and Serbian historians is that the Kingdom of Serbia and Croatia ruled parts of Bosnia during the 9th century, and that in the 11th and 12th century Hungarian Kingdom masters over Bosnia.

However, the majority of Bosnian historians considered that Bosnia has been an independent state since 9th century. On the other hand, Serbian and Croatian historians believe that the medieval Bosnian state acquired its independence around 1200, basing its thesis on unverified documents of the Catholic and Orthodox churches, and that during this period its indigenous Bosniak people grew here. At first, rulers of Bosnia were bans, first famous ban of Bosnia was Ban Borić, then Kulin Ban, and after the coronation of Ban Tvrtko and Kotromanić, in 1377, the rulers of Bosnia become kings. Bosnia preserved independence until the arrival of the Ottomans in 1463, when officially it became part of the Ottoman Empire.

During the Ottoman rule in Bosnia, many Bosnians rejected Christianity and converted to Islam. At the same time, Vlachs, who later became Serbs, for the first time, appear in some parts of the former Bosnian eyalet, while many Bosnians move out to the west and north. This development of demography is the root of nowadays people of Bosnia and Herzegovina. Many Bosniaks belonged to the Bosniak nobility, so that already in the first half of the 16th century many beys and military leaders in Ottoman Europe were from Bosnia (e.g. Mehmed Paša Sokolović and Gazi Husrev-bey).

In the 16th and 17th century, Bosniaks were part of the Ottoman army, and the most important roles in government of Bosnian eyalet usually belonged to Bosniaks. Many of the families, who converted to Islam early, were very powerful, and for a long time this retained feudal relations between Bosniaks and other nations.

Ottoman failures against second regional power in this part of Europe, Austria, move the border between the Ottoman Empire and the rest of the Europe, which now again arrived at the gate of Bosnia, whereby the overall situation in the country deteriorated. With the constant attacks and the economic crisis disaffection was spreading, thus in the first half of the 19th century, Sultan tried to make reforms several times, but captains in Bosnia answered to this by riots. The most famous is rebellion of Husein-kapetan Gradaščević in 1831. After Ottomans defeated them, military resistance of Bosniaks ended, while the empire was still weakening. At the same time, Serbian and Croatian national movements exert strong pressure on the Bosniaks, so that many Bosniaks based on religion or something else went to Serbian or Croatian national corpus, and the number of Serbs and Croats in Bosnia grew.

In 1878, by the decision of the Berlin Congress, Bosnia becomes an integral part of the dual kingdom of Austria-Hungary. Parallel to this, in the neighboring states, Slavic national movements develop, those worked on the unification of all South Slavs in the southeast of Europe. The cause of the First World War was the assassination in Sarajevo in the summer of 1914, which was done by Gavrilo Princip, a member of the revolutionary youth movement “Young Bosnia” (Mlada Bosna). He shot and killed the Austro-Hungarian Archduke Franz Ferdinand and his pregnant wife. The trigger for the first major confrontation of global dimensions was thus found.

At the end of the First World War and the collapse of Austro-Hungarian Empire, Bosnia and Herzegovina enters the beginning of the State of Slovenes, Croats, and Serbs, and then the newly created Kingdom of Serbs, Croats and Slovenes, which is from 1929 called the Kingdom of Yugoslavia. After increased industrialization and the general expansion of Bosnian society during the Austro-Hungarian era, during the first Yugoslavia Bosnia and Herzegovina regresses economically, which creates the basis for social discontent and unrest, which will later follow.

After the collapse of parliamentary democracy and the 6 January Dictatorship in 1929 there were new administrative and political changes in the country. Yugoslavia got nine banovinas, which formally divided Bosnia and Herzegovina. In its historical form the area of ​​Bosnia and Herzegovina was given to four different banovinas, which were named after the geographical and historical regions. Vrbas, Drina, Zeta, and Littoral Banovina should have, according to the original idea of ​​ Yugoslav King Alexander I, suppressed regional and national identity, and put in the foreground unique Yugoslav identity.

In 1939 Agreement Cvetkovic-Macek resulted in creation of the Croatian Banovina, it was given parts of Bosnia and Herzegovina, mainly those which already belonged to the Littoral Banovina and parts of the country on the north, along the Sava River.

At the beginning of the Second World War under the leadership of Ante Pavelić, on 10th of April 1941 Independent State of Croatia (NDH) was established, and entire Bosnia and Herzegovina was a part of it. A significant part of the Bosnian Croats participate as members of the military of NDH; Ustashe, Croatian Home Guard, while a handful of Bosniaks has leading positions in the government as ministers in the government, for example Osman Kulenović and Džafer Bey Kulenović. Certain number of Serbs fought on the side of the Chetniks, and participated in the persecution of Croats and Bosniaks. Ustashes persecuted and killed Serbs, Romani people, Jews, and communists.

Yet, a large part of Bosniaks, Bosnian Serbs, and Bosnian Croats actively participate in the anti-fascist movement of Josip Broz Tito, giving a significant contribution to the National Liberation War and the final liberation of the whole country from foreign invaders. Thus, Bosnia and Herzegovina can boast that it is one of the first countries of the antifascist coalition in imprisoned Europe 1941-1945.

In the time from 1945 to the early 1990s, the Socialist Republic of Bosnia and Herzegovina experienced rapid industrialization, modernization, and urbanization, and parallel to this country’s institutions were established, underlining its statehood and institutional independence. In this era the Academy of Arts and Sciences, University of Sarajevo, Banja Luka, Mostar and Tuzla, Sarajevo Radio and Television, and many other national and cultural institutions were established. 1971 brought the recognition of Muslims as the sixth nation in the former country, who with Serbs and Croats, were one of the constituent peoples of the Socialist Republic of Bosnia and Herzegovina and Yugoslavia.

In 1984, the capital city of the Republic, Sarajevo hosted the 14th Winter Olympic Games, sports event of peace and friendship, which raised the prestige of the city and the country abroad. During the 1980s, Sarajevo and Bosnia and Herzegovina, became center of the pop culture in Yugoslavia. Here created some of the most popular local filmmakers (Kusturica, Kenović), and pop and rock groups from here were the most important in the country. The rich literary tradition continues during the seventies and eighties in the masterpieces, which continue there, where once stopped the Bosnian most significant authors like Ivo Andrić (Winner of the Nobel Prize  for Literature) and Meša Selimović.

In 1991, Croatian President Franjo Tuđman, entered into an agreement on the division of Bosnia and Herzegovina with Serbian President Milošević, during the well-known meeting in Karađorđevo. Today, there are numerous documents on the division of Bosnia and Herzegovina, among which the most important are the transcripts of Franjo Tuđman, and the testimony of Stjepan Mesić, former president of Yugoslavia, Ante Marković, former Prime Minister of Yugoslavia, and many other witnesses of time.

The war lasts until 1995, in which Bosniaks were killed, over which the genocide and ethnic cleansing was committed, Serbs and Croats have suffered great losses too. All three peoples in the country experience war in different ways, seeing in it threat to its national interest. So, for majority of Serbs this was the war for the fatherland, for majority of Croats this was patriotic war, and the truth is that this was the war initiated for the sake of the objectives of projects in neighboring countries and the strengthening of nationalism. In early 1992 historical name of Bosniaks was back in use, as the name of the nation, which replaced its former religious label “Muslim”. Intervention of international military ended the war, and Bosnia and Herzegovina  has maintained its statehood and historical continuity.