Harvie S American Contrabass player, Composer, Innovator, as well as a Professor at the prestigious Academy Manhattan School of Music, will perform in Sarajevo on December 8, in SARTR, as a co-leader in Sinan Alimanovic & Harvie S International Band. Harvie S speaks exclusively for VISIT B&H magazine about the upcoming performance, but also other things.

You’ve met Sinan Alimanovic at the jazz club Blue Note New York. Can you tell us how your music collaboration started?

-I was playing at the Blue Note jazz club and Sinan came in after we just finished playing. He wanted to play the piano to try it. I let him come up on the stage and he started to play. After I heard him play I immediately got my bass out of the case and joined him. That started our musical relationship and our friendship.

In mid – December, you will be in Sarajevo for the first time as the co-leader of the Sinan Alimanovic & Harvie S International Band. You already performed with Sinan Alimanović in New York (USA) and Beijing (China), but can you tell us what do you expect from the Sarajevo concert?

-I never know exactly what to expect. But what I know will happen will be some great music. We will play some jazz standards, Sinan’s tunes and some of my original Compositions.

How would you describe the music of Sinan Alimanovic: his approach to pianism and jazz?

-Sinan is a world class musician. He is a great composer pianist and a arranger. He has great technical knowledge but he plays from the heart.

You have been a professor at the prestigious Manhattan School of Music since 1984. What are your methods of working with young musicians, and which methods will you apply at the workshops with Alimanovic’s jazz students at the Sarajevo Music Adacemy? 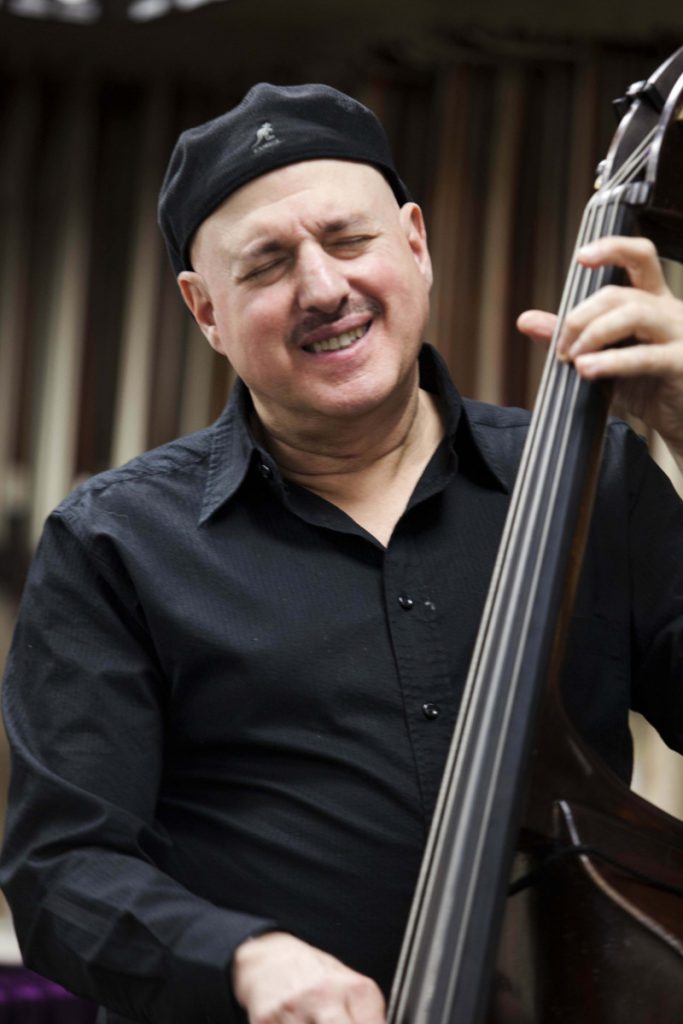 -I am looking forward to doing the workshops. I do not know exactly what topics I will cover. That is usually determined by the participants. I like to be open to dialogue and questions. I will be there to help in anyway that I can.

You are also an innovator. From recently, your innovation The Upshot Bass Speaker and Amplifier made by Acoustic Image, has been promoted and it’s on sale now. Please, tell us more about your innovation and the ways it will be useful for the musicians.

-This amplifier originally was made to be a portable bass keyboard and guitar amp. It packs up into a knapsack or you can carry it in a little bag. It is very light. After we built it we realized that the real feature of this amplifier is the sound. It is the most natural sounding amp I have ever played through. It’s also an innovation with the sound comes up at you and you hear yourself so well. It also projects great in any room that you play. It sounds like you are not playing with an amplifier but you can be heard perfectly.

One week ago you recorded with the Grammy Award – winning musician Alan Broadbend and the String Orchestra at the Abbey Road Studio 2 (at the same studio where once legendary band The Beatles recorded also). Last year, you were a member of the jazz project “Developing Story” by Alan Broadbent and performed beside London Metropolitan Orchestra and well known jazz drummer Peter Erskine. Can you tell us more about this jazz story?

-This is the second project with Alan Broadbent at Abbey Road. This time was a little different because we used a string orchestra of violins, Viola’s, and cellos. About 44 musicians. The previous project was an orchestra that had timpani Trumpets basses etc. they go by the name of the London Metropolitan orchestra. We recorded in studio one which was the big big studio, at this time we recorded in studio two which is A good size. And yes this is where the Beatles recorded. Alan is one of the greatest arrangers in the world. And I was so honored to be a part of this project. We did the music of Dave Brubeck. This is going to be a great CD.

You have collaborated with many of the world’s greatest jazz musicians such as Michael Brecker, Randy Brecker, Gil Evans, Tony Bennett, Sheila Jordan… Can you find one common trait to all those collaborations and what is your advice to the young jazz musicians?

-A very good question. Actually what I think is the common trait is dedication. In order to be a great musician you must be so dedicated to the music and to all the details. I also feel that humanity is most important. What you really want to do is to share your love through your music and hopefully give a good feeling to the people that listen to you.

What are your future plans with the Sinan Alimanovic International Band as with the other jazz?

-I am looking forward to this project with Sinan. We previously played in China and the music was great. I hope we can do many more projects together. We are looking into some other touring possibilities. Maybe returning to China. Maybe we will do something in New York also. Time will tell.