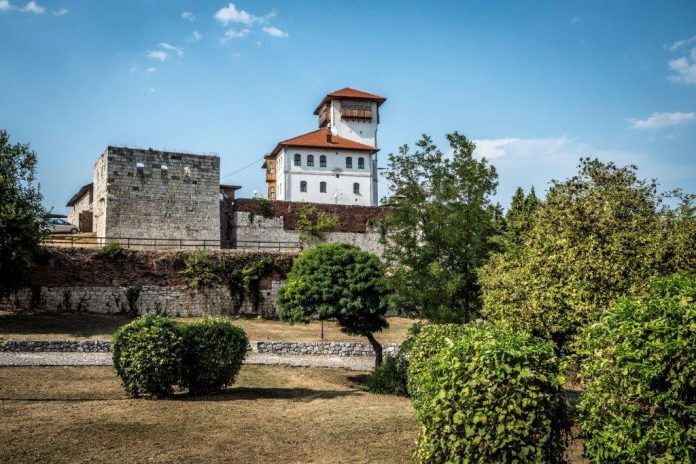 Gradačac tower, Gradina, Tower of Husein-kapetan Gradaščević or Castel of the Dragon of Bosnia is the main characteristic of this town in the north of Bosnia. It dominates the landscape of Gradačac, erected at the highest point in this area where Posavina plain ends and Bosnian small hills start to rise.

In their time, they were one of the most powerful families in Bosnia and Herzegovina, and today very few remained in Gradačac. They mostly moved, some to Sarajevo, some to Banja Luka.

The tower itself is 18 meter high, seven and a half meter wide, and the thickness of the surrounding walls is one meter. This is not surprising because the tower was built as a military complex, a city defense system, where the army and the city administration were located. When you climb to the tower of the castle, you have a 360 degree view of the environment.

– During nice days, there is a view of five towns – Odžak, Šamac, Orašje, Brčko and Modriča, so that the soldiers had a complete overview of the environment, if some army moves towards them, it is noticed on time – says tourist guide Nermina Ćatić.
The Old Town complex extends to 35 dulums, it is surrounded by a kilometer long ramparts in the concentric circle, and besides the tower, there are also Husejnija Mosque, Clock tower and other towers. All these buildings were built by Gradaščević family. The Old Town also includes two buildings from the period of the Austro-Hungarian Empire, those are a gymnasium and a library.

Below the tower there is a closed system of tunnels, which served for defense, but those were buried until a few years ago. Recently, two 30-meter tunnels were dug up and cleaned, lighting was made inside and it was paved, so tourists do not walk through mud. It is assumed that there are more of these tunnels. When the tower was built, and while serving its purpose, the tunnel with loopholes was used to defend the city, but the fate wanted it to be so that these tunnels, for centuries later, were used again in the past war.

– As far as Gradina is concerned, the first written evidence of it dates back in the first half of the 18th century, by a captain from Slavonski Brod, who in his travel document says that one can see the tower in “Gračac” foduring sunny days –  explains Nermina.

The tower is today a cultural and historical monument and is owned by the Municipality of Gradačac. The municipality rents Gradina so that today, apart from the cultural and historical monuments visited by tourists, it also serves as a restaurant and sort of a hotel. Čardak, where the restaurant is placed is best during winter, and in summer it is the most attractive summer garden where many cultural events such as book promotion, poetry evenings, concerts are held …

Inside the Tower, a few rooms serve as apartments where guests can sleep for 60 BAM. Particularly beautifully decorated is the Bosnian room, which is often used by the Municipality for various festivities. There are only a few exhibits from the time of the Captains of the City, like sabre with handles made of elephant bones. The walls are also decorated by one and only portrait of Hussein Gradaščević, which was created on the basis of a drawing, and the ferman (decree) by which Gradačac was proclaimed captaincy.

Charcoal kilns in the villages near Fojnica: How the healthiest and highest...