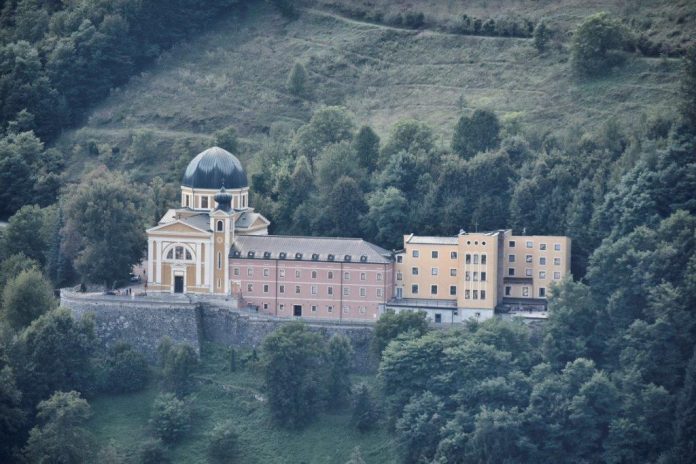 The Franciscan monastery of the “Holy Spirit” is placed in Fojnica, a picturesque town located in the central part of BiH, only 50 kilometers from Sarajevo. The monastery complex today is made up of a church, a museum and an archive. It is very important to say that the objects found in the Monastery today are mostly made of gold and silver, and were made by master craftsmen.

Due to the dilapidation, in 2000, the old part of the monastery, where the museum and library were located, was demolished and a new building was built in the same place. The museum was inaugurated in 2014 and has been renovated with the financial support of the Governments of the FBiH, Turkey and the Government of Croatia. Today it is one of the most modern museums in BiH, which in 2017 was shortlisted for the best museum in Europe.

The entire treasure inherited by the monastery museum is of inestimable value, and so it rightly bears the title of one of the best decorated museums in BiH, and as such attracts a large number of tourists from BiH as well as abroad.

Arrival of the Franciscans

The Franciscans came to Fojnica 650 years ago, most probably from Srebrenica, continuing their mining, because the area is rich in various ores, silver, gold, and quicksilver. They settled in a place called Pazarišće, where they built a small monastery, a church and organized a friar’s life.

As an area rich in medicinal water springs and ore resources, as early as the 10th century Fojnica was an extremely desirable place to live, inhabited by the people of Dubrovnik and Sasi, who were engaged in the mining of ore, which they later carried to their lands. As the workers came mainly from Catholic countries, they asked church authorities to bring Catholic priests to Fojnica.

The first priests were from Dubrovnik, then Dominicans, who also stayed for a very short time. Until the beginning of the 14th century Fojnica was permanently settled by the Franciscans, who built a church and a monastery several decades later on the Križ hill, which today represents a significant cultural and historical treasure of BiH. Today, this museum carefully keeps exhibits collected over the centuries by the Friars with the help of the local population, as well as extremely valuable documents and books.

The monastery in Fojnica has an extremely rich library, which carefully stores more than 50,000 books, including 13 incunabula. Most of the titles are from the period from 1850 to the present, but there are also titles written by 1850. A guide on Braille has been prepared for the blind and visually impaired so that they can experience the museum’s charm in their own way. Unique items can be bought in the souvenir shop, handmade by members of various associations, as well as local wine, brandy, liqueurs. A guide, Natalija Šimunić, took us through the Museum, patiently explaining the value and importance of the treasure that is kept here.

– One of the most important documents kept in the monastery museum is the Ahdnama of 1463 by which Sultan Mehmed II El-Fatih, at the request of Fr Anđel Zvizdović, allowed the Franciscans to move freely around Bosnia and to act among the people. After written permission for the Franciscans to remain in Bosnia, a meeting between the Sultan and Fr. Anđel was arranged, and as a token of respect and friendship, Sultan put a silver cloak on Fr. Anđel. In addition to the silk cloak, the most valuable items include church utensils, amphorae, items made by goldsmiths from Fojnica dating from the 15th and 16th centuries, Ottoman jewelry, various medieval weapons, and church bells from the Ottoman period.

-There are more than 3,000 original handwritten Turkish documents stored here that have not yet been translated and it is not yet know exactly what is written in them. A lot of documents were sprayed with gold by the Turks – says Natalija Šimunić.

-The gallery of art paintings cannot leave you indifferent, not can the departments of numismatics, philately, there are many albums of old photographs. The library contains the oldest incunabula, books dating from 1450 to the end of the 15th century. We have 13. We also keep the oldest picture in BiH, it says 1328. It’s a wooden background and a vase with flowers on it – Šimunić explained.

The Museum also houses items from the 16th century, as well as the 17th century Fojnica coat of arms. The museum also has a Mohammedan newspaper, which came out immediately after Ahdnama. It is written in Bosančica, and it confirms what it was said in Ahdnama. This museum houses folk costumes and jewelry, textile fiber processing devices, economic tools and supplies, crafts tools and products, and numerous other items that illustrate the daily life of Fojnica residents in the 19th and 20th centuries. A significant place within the Museum’s premises belongs to the collection of cold and firearms ranging from prehistoric times to the end of the 19th century, as well as the collection of minerals and ores, since Fojnica was known as the mining area.

The monastery archive is rich in very diverse and valuable material. It preserves documents of particular importance to both Franciscan and general Bosnian history. It is sophisticated and accessible to researchers. There are also 156 documents stored, and those are written in Bosančica, made between the 16th and 18th centuries. The monastery treasury is very rich in art objects of practical church use made of metal or cloth.

The guardian of the Monastery is once again a familiar face, Fr. Mirko Majdančić, who returned to Fojnica just over a month ago. He served here for six years, and then for a full ten years in Vareš. Bosnian from head to toe, who brought this national monument back to the public during its first service. Majdančoć is also a successful manager, motivating people from the Monastery. He is preparing the event “Susreti” for September 13, when a memorial of two significant meetings in history will be erected.

– The people of the monastery must be creative and write projects. Sometimes it is accepted by the competent political structures, sometimes there is no money. The Friars, monasteries, ministries, raised funds for this monument the current Fojnica Mayor Sabahudin Klisura promised in the future any kind of assistance. The ceremony is symbolically called “Susreti/Meetings”, and is dedicated to the 800th anniversary of the meeting of Fr. Anđel and Sultan al-Malik al-Kamil in two Egyptian cities – Damietti and Cairo, and the 550th anniversary of Fr. Anđel Zvizdović’s meeting with Sultan El Fatih. They are held at the initiative of Pope Francis, who considers them essential for understanding of people, meetings of peace – says Fr. Mirko Majdančić.