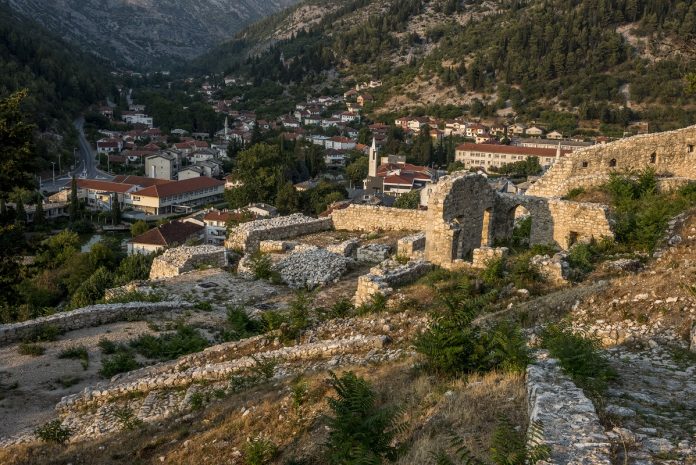 The continuity of the presence of the human community in the area of Stolac dates back 16,000 years, the region is located in a Mediterranean climate where all kinds of fruits thrive, mostly grapes. During the rich history, events took place, conquerors took turns, famous people were born who left their mark in this small town in the south of Herzegovina.

The city was founded on the banks of the karst beauty of the river Bregava, surrounded by mountains Hrgud, and Vidovo Field, with the surrounding places written by the pen of a rich cultural past. On the west side there is Dubrava Plateau, which is specific and known for its peach and vineyards.

Stolac was first mentioned in written sources on May 7, 1420. For now, it is the birth certificate of the name of this town. The first known inhabitant of Stolac was a certain Gojak Tihosalić, who was engaged in cattle breeding. The document is in the State Archives in Dubrovnik. Its content is as follows: “Milien Budečević filed a lawsuit before the Duke of Dubrovnik Nikola Pucić against Vučihna and Stjepoj Vlahović from the settlement of Vučihna Vlahović because in those days they took away three cows and an ox in a place called Stolac, and which cattle Milien had in custody and breeding at Gojak Tihosalić from Stolac”.

The successor of Gojak Tihosalić could be Vukmir Gojaković, who is mentioned at the end of May 1436. Marked that he was from Stolac in Vidovo Polje, Vukmir Gojaković then committed himself to a seven-year service with the Dubrovnik gunsmith Antolin Obradović.

All this today makes Stolac extremely attractive for visitors who are happy to come and enjoy the charms of a small town that exudes Mediterranean charm. The oldest witness to the existence of life in these areas is the Badanj Cave, which is located near Stolac. Badanj Cave is a Paleolithic habitat where drawings with hunting details and a clear image of a horse have been found.

There is also the fortified Illyrian city of Daorson, which arouses admiration for its cyclopean walls. Daorson was the capital of the Hellenized Illyrian tribe of Daors who lived from 300 to 50 BC. The remains of this once strongest town in the wider area are located in Ošanjići, at an altitude of 280 meters above the sea level, which offers a view of the fertile Stolac valley.

The old town of Vidoški in Stolac was founded in the fifth and sixth centuries, during the Byzantine Emperor Constantine who built a fortress in Stolac in order to protect his trade caravans that went from west to east, towards the former Byzantium.

After Emperor Constantine, the city was neglected, until the arrival of the Slavs in the eighth and ninth centuries, and in the 14th and 15th during the reign of Duke Stephen Kosača, it experienced its medieval heyday. The city was conquered by the Ottomans in 1471 and it got its current contours with all the fortresses, walls and towers. In the 17th century, the city had 13 towers and was the best fortified city in Herzegovina.

There are numerous cultural and historical monuments from the Middle Ages, and the most important are the “stećak“ tombstones, tombstones that Mehmedalija Mak Dizdar calls “stone sleepers”. Three kilometers from Stolac is the necropolis of Radimlje with 133 tombstones. There is also the necropolis of Boljuni, which is located in the village of the same name near the city. Both necropolises are on the UNESCO list.

For lovers of Ottoman architecture, you can see the Sultan Selim-Emperor’s Mosque (16th century), the mosque in Uzunovići and Ćuprija (17th century). There is also an interesting complex of oriental-residential architecture known as Begovina (19th century).

Stolac is also known for its mills, which are a strong tourist potential of this city. There are a total of 12 mills on Bregava. They all stopped working in the 1950s, because due to the rapid economic development of the city, there was no longer any interest in grinding grain or washing in the pillars that worked next to the mills.

There is also the grave of the Sarajevo rabbi Moshe Danon, a member of the Jewish community from the beginning of the 19th century. He was appointed supreme rabbi in 1815, and 15 years later, during difficult times for the Jewish community in Bosnia and Herzegovina, he set out on foot for Palestine, wanting to die and be buried in the Holy Land. He died on that road, near Stolac, at the place where he was buried.

This quiet, sunny place in southeastern Bosnia and Herzegovina, full of stunning Ottoman architecture, is a real treat for those intrigued by anthropology, archeology and history. No other city in Bosnia and Herzegovina has produced so many intellectuals, artists, poets and leaders. As you walk through Stolac and listen to the fast Bregava and the chirping of many birds, you realize what has inspired many generations of extraordinary persons from Stolac.

This is a great place to walk, taste homemade wine, figs or pomegranates that grow here in every backyard. This is also a great base for further exploration of this region by bike. The city center is full of lush trees, with unique pine trees that grow to the sky.

Clinic of Veterinary Faculty, University of Sarajevo: A team that takes...