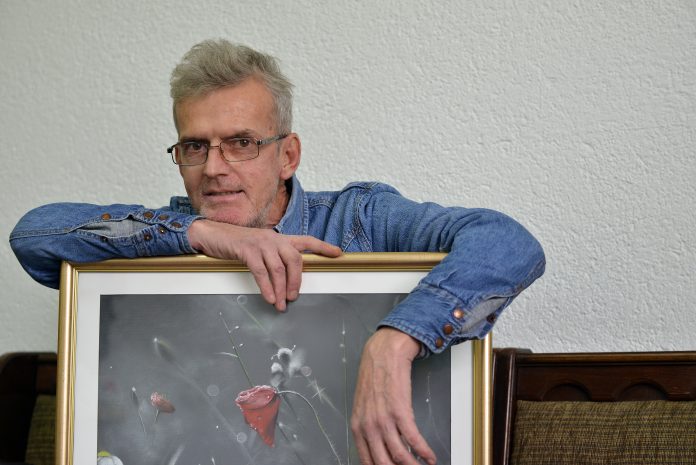 A longtime miner from Breza, Ešref Muratović Bubby, is a painter in his free time. His brush strokes on the canvas create a real spell, and he never graduated from the Academy of Fine Arts. He did not study because of poverty. He grew up in a family who had no money to pay for his education. However, this could not shut down his impeccable talent!

Love for art began with reading comics, when he first tried to draw and liked it. He mixed colors according to his feeling, creating still life and alive nature, buildings, portraits, acts … It is so credible that his works, in the eye of the ordinary observer, do not differ much from those created by outstanding artists with a degree. Probably only art historians can see the difference.

The first solo exhibition he had within the coalmine, at the initiative of his director, was followed by a large exhibition in Sarajevo, which was his great dream. Due to an accident at work that happened a few years ago, he lost sight of his right eye, so he replaced the production and processing of coal in the mine with a telephone switchboard, where he now works and he is still making paintings with same intensity.

“When you love something, then you do not give it up so easily, and you do mind being truly dedicated to it,” he says.

He rarely creates art works by order, mostly they are created at his sole discretion, but there are some buyers.

– Mostly diaspora and foreigners are interested in my works. I sell something here and there, but it does not matter to me, because I do what fulfills and rests me. Painting is a brainwave, an escape from reality – Muratovic is honest.

He gave many paintings as a gift, especially to his colleagues in the mine. Many paintings, he says, decorate offices of mayors. Everything else is presented to the public on the social network Facebook.

– As I discovered Facebook, I have been reborn. Reviews are positive, and this is what fills me and gives me the strength to continue – Muratović points out.

He also revealed that the director of the museum from Denmark, whose name he could not remember, informed him that he would put one of his works in the collection of the cultural institution he was leading.

– The problem is the language. I learned Russian at school. The son knows som English so we manage to communicate. We are in contact, so we will see if we can agree on something – said Muratović.

For the end of the conversation, he told us that he has one desire, and that is to paint in the open, in Baščaršija, in front of the audience, as they do in other major European cities.