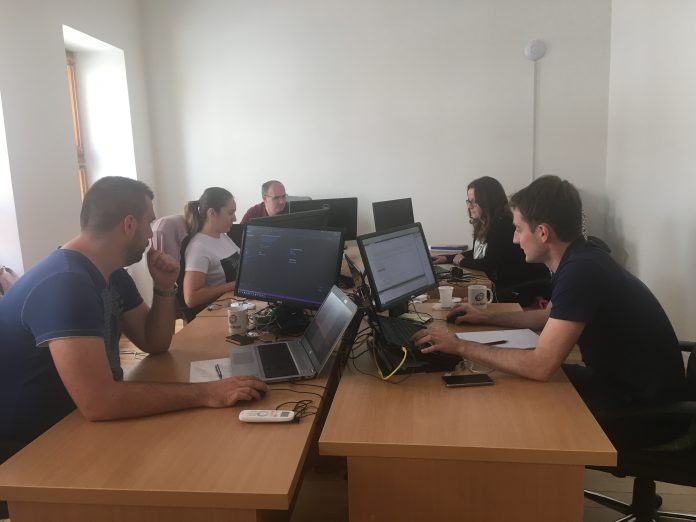 The software industry is one of the biggest potentials for development of Bosnia and Herzegovina. Between 2,500 and 3,500 programmers is currently working in our country and the needs of the labor market are much higher. The best example of this is the Faculty of Electrical Engineering in Tuzla, where there is not a single student of the fourth year at the IT Department, who is not already employed.

– We develop software solutions and there are four branches of our business. We create websites and applications, we create mobile software for all platforms, we make embedded software for devices provided for a specific purpose, and we design business intelligence software that, based on the user data, creates a variety of reports, statistics … – says Senad Žunić, one of the founders of the codeNest.

He launched codeNest in February 2014 together with Valentina Ivanović and Zlatan Mulabegović, after years of collecting experience in other companies. Their headquarter is in the BIT Center in Tuzla, technology park, which was created thanks to the money of the European Union, with the support of Tuzla municipal authorities. The company is doing minor part of the job for the clients in Bosnia and Herzegovina, and majority for those in the region and Western Europe.

– Croatia, Serbia, Slovenia, countries that are closer to us, then Denmark, Sweden from countries of Western Europe – says Žunić about client countries with which they cooperate.

Valentina Ivanović says that it was a long road to opening a successful company.

– I’d recommend anyone to start their own business if there is a strong will, a desire to change something, and they have the idea. But it is not the path which is always rosy. Success requires knowledge, competence, originality and luck, but it is not in the first place – says Valentina Ivanović.

CodeNest recently became part of the BIT Alliance, the association of companies of the software industry, which brings together 12 companies from Bosnia and Herzegovina, which have about 1,000 employees.

– The aim of the BIT Alliance is to present Bosnia and Herzegovina as an IT destination. We want you to know that we have quality people who know how to present projects and that we have many other advantages such as geographic location, finances … Our goal is to increase the number of employees in this field – says Senad Žunić.

According to BIT Alliance analysis, one software engineer generates annual revenue of 80 to 120 thousand BAM. This means that 12,000 engineers in this area would generate more than a billion BAM of revenues that would launch IT sector at the very top of BH economy.

– We want to introduced IT classes in every high school, to introduce subjects at the Faculties of Electrical Engineering that fit market needs, to increase the number of enrolled students, to introduced informatics in primary school … This sector has the potential and we want to create for personnel for ourselves – concluded Žunić.

Lower roaming prices in the region from July 1