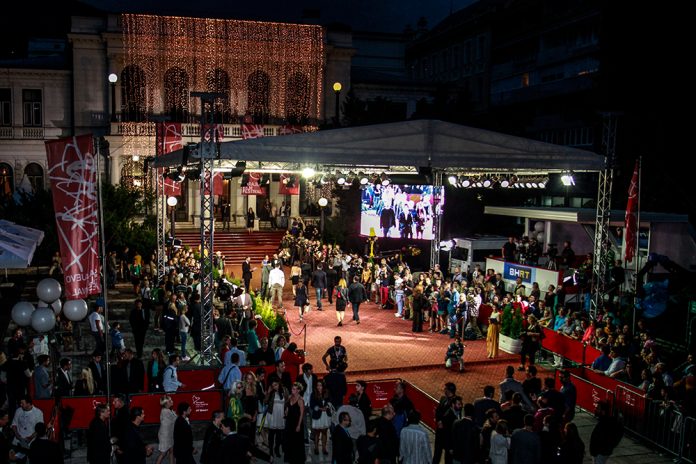 In wartime autumn of 1993, the director Haris Pašović initiated the creation of the Sarajevo Film Festival (SFF), and young enthusiasts from the team of the International Theatre Festival – MESS have helped him by translating and subtitling nearly 150 films and making a programme.

The theme of the festival was “Poslije kraja svijeta ” (Beyond the end of the world), and those days’ eight-page catalog had been published by a Daily Newspaper “Oslobođenje“. SFF arose under the rain of shells, and became a shelter for the brain. Dresses and makeup were not important back then, and the stars of SFF were citizens who, under sniper fire and shelling, rushed to cinemas to watch movies.

However, Obala Art Centar organized the first official Sarajevo Film Festival in 1995, at the end of the four-year siege of Sarajevo, time of madness and dimwitted, with a desire of helping the reconstruction of civil society and thus preserve the cosmopolitan spirit of the city – official web site of the Festival noted.

Two decades later, it has grown into an international film festival with a special focus on the region of South-East Europe, and thanks to it films, talents, and future projects from the region reach the center of attention of the international film public. With the intention of promoting a film creativity and authors within the region Sarajevo Film Festival also founded a regional co-production market “CineLink”.

Sarajevo Film Festival every year offers to its visitors interesting souvenirs that can be found in the festival store. T-shirts, canvas bags, posters, hats, notebooks, diaries, pens, ties, badges, mugs, labels, billboards – are only part of a rich offer. There is a silver badge “Heart of Sarajevo” as well, it was a real hit last year.

Sarajevo Film Festival since 2005, its tenth edition, awards the “Heart of Sarajevo” for acting and directing skills, the best documentary and documentary performances in general, as well as the “Honorable Heart of Sarajevo” award for individuals as a recognition of the contribution to affirmation and development of the film industry.

“Heart of Sarajevo” was created by Agnès B. (born Agnès Troublé), designer and director, who is also the long-time sponsor of this biggest festival in the region. It was precisely because of this passionate support, and the extraordinary contribution to film art, that she received “The Honorable Heart of Sarajevo” at the 20th SFF.

The search for the visual identity of the SFF award was resolved spontaneously, i.e. by selecting the form that was present since the very beginning of the Festival. Agnes made a heart at the time when Sarajevo was in severe war conditions. After the adoption of the visual part, the prize was made by brothers Senad and Sead Sofić. It is made in full matte silver and follows the irregular heart shape.

Marco Müller, director of the Rome Film Festival, was awarded the first “Honorary Heart of Sarajevo” in 2005, followed by director Mike Leigh and former Minister of Culture and Sports of the Federation of Bosnia and Herzegovina Gavrilo Grahovac.

A year later, actor and director Steve Buscemi was awarded, while the 2008 winner was Cat Villiers. Manfred Schmidt, executive director of Mitteldeutsche Medienförderung GmbH, won the 2009 award, and in 2010, it was awarded to Dieter Kosslick, director of the Berlin International Film Festival.

The producer Branko Lustig was awarded in 2012, while Roberto Olla, the executive director of Eurimages and director of Béla Tarr in 2013.

Honorary heart of 2014 was given to Agnes B., the designers of this award, and Alejandro González Inárritu, in 2015 Atom Egoyan and Benicio del Toro won the heart.

Last year’s winners of the “Honorary Heart of Sarajevo” are Stephen Frears and Wolfgang Amadeus Brühlhart, and for the first time the “Honorable Heart of Sarajevo” for life’s work, for outstanding contribution to film art was awarded to one of the most famous actors around the world, Robert De Niro. This year, the legendary comedian John Cleese will receive that prize.

World stars on the red carpet

It was they who made Sarajevo a world-famous, attractive place for tourists. They threw a new light on the city that, due to the difficult past, was unfairly ignored and generally known for wars.

These giants did not save words in promoting BH capital, and very often in conversations with journalists, they emphasized the enthusiasm due to its charms, rich history, good food, hospitality. The words of praise were also spoken about the Sarajevo Film Festival, and many of them took their “Heart of Sarajevo” with them to their homes.

Their words about the Sarajevo Film Festival:

“I was so warmly welcomed by the inhabitants of this city. I will go around the city to see what people have been doing here to save their lives and keep their city for themselves. I will also visit the Tunnel of Hope. It’s a touching experience for me.”

“On the last day of the Sarajevo Film Festival, I will award the Katrina Cartlidge Foundation Award to give this Festival an additional dimension to differentiate it from other festivals in the world. I will remember the good spirit of Sarajevo and the friendships I have gained in this city.“

“I have never worked with such talented actors in my career. I am much honored to receive the “Heart of Sarajevo” and to be with you. Thank you!”

“I’ve never been to Sarajevo even though I have been called for two or three times. Now it was time to come. I am delighted with the hospitality and the Festival.”

“I will watch the heart of Sarajevo and remember Sarajevo with pleasure because there are not many cities in the world that were brave and showed the heart when it was needed, in the most difficult moments”

NN The economic significance of SFF:

N People from all over the world arrive to Sarajevo

This is confirmed by the fact that every year, nine days of duration of the Festival in Sarajevo, it is impossible to find a room in many hotels and hostels.

It is one of those beautiful sides of the capital that we find in all world magazines. The fact is that cultural manifestations of this significance not only enhance the image of Bosnia and Herzegovina but also attract a large number of people to visit our country.

All those who come and see the festival spell, and the beauty of Sarajevo, are happy to come back again. In addition, those who are not film lovers, at the time of the SFF, have a handful of other entertainment events, and the city lives one new rhythm for seven to ten days. Sarajevans have trouble recognizing the city in those days.

With many events, it is hard to decide what you will attend. This festival, as well as numerous European and world awards received by our filmmakers, have provided Sarajevo and Bosnia and Herzegovina a regional leadership in film art. Sarajevo Film Festival is a development project of the city.

Thanks to the SFF, many young people will get a job, and in the festive atmosphere, with their recognizable hospitality, this year also will welcome participants and guests of the 22nd Sarajevo Film Festival.