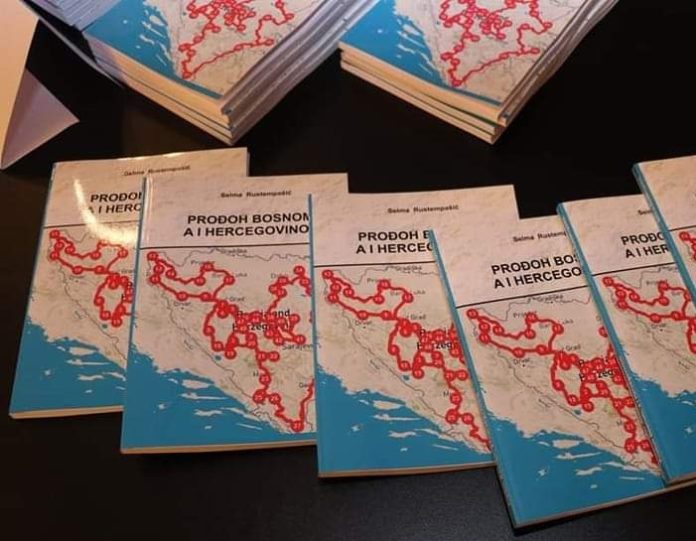 “Let’s get to know the homeland to love it more!” – It is the slogan set by Selma Rustempašić, history professor and author the book “Prođoh Bosnom, a i Hercegovinom” (Passing through Bosnia, and Herzegovina) as the goal of her work. The book is a kind of guide through the cultural and historical heritage of Bosnia and Herzegovina, with which the author sought to emphasize the most important places and monuments that can be visited, explored, and experienced in Bosnia and Herzegovina.

-The book is divided into four chapters, which cover the regions – Banja Luka, Trebinje, Tuzla and Sarajevo with a total of 45 municipalities – says Rustempašić for Visit BiH Magazine.

In short and meticulous texts, the author gives important geographical characteristics of individual areas, looks at the etymology and history of the place, and highlights the most important cultural and historical monuments through historical periods related to individual sites and cities. Rich pictorial material complements the texts, awakens the imagination, and invites further individual discovery of described places.

The process of emergence of the book

The idea and the process of creating the book itself lasted, with short breaks, for more than ten years, and the last two were much more intense.

-I have adapted the motives and described destinations to the interests of ordinary readers, but also to enthusiasts and good connoisseurs, both cultural and historical heritage of our homeland and other attractive natural and geographical areas of Bosnia and Herzegovina. In the texts, I listed the important geographical characteristics of individual areas, the history of the place, and singled out the most important cultural and historical monuments related to individual sites and cities – she said.

Below are some of the texts found in this book:

We are spending the day in Ajvatovica, the oldest praying site of Bosnian Muslims. Legend has it that Grandpa Ajvaz found a strong spring under the Šuljaga Mountain, near which there was a rock that was an obstacle to the water which he wanted to bring to the settlement. He decided to beg the Almighty to dismantle the rock so that he could run the aqueduct to Akhisara.

Every morning, for 40 days, he went to perform the morning prayer on the rock and prayed for the rock to be parted. On the fortieth morning, after praying and reciting the Qur’an, he fell asleep and dreamed that two rams had collided, and the rock had parted. When he awoke, Grandpa Ajvaz saw that the rock had been dismantled.

After that, Grandpa Ajvaz conducted the water supply with wooden pipes to Prusac. The people named this spring after their grandpa “Ajvatovica”, and the rock “Ajvaz-dedina stijena/Grandpa Ajvaz’s Rock” and as a sign of God’s grace, people started visiting the place where the rock cracked, which has remained a practice to this day.

It is unthinkable to go to Jajce without visiting the mills. Mlinčići is a site five kilometers away from the center of Jajce. They are built of oak wood on the travertine barrier between Velika and Mala Pliva Lakes. According to the data from 1562, there were 24 mills in Jajce at that time, six of which were not in operation. The mills were owned by wealthy landowners, who gave the mills for use to the local population, and they paid taxes with flour.

For centuries, people from the surrounding villages brought full sacks of grain and wheat on horses, which they grounded in mills, and went home with flour. The historical importance of the mills, as mirrors of the former Bosnian tradition of work and way of life, resulted in their restoration in 2005. Since then, six mills have been in function again, while the others have been brought to their original appearance and have again become part of the recognizable symbols of Jajce. Cultural landscape – Pliva Lakes with a complex of mills on the Pliva near Jajce, in 2009 was declared a national monument of Bosnia and Herzegovina.

Tašlihan (tašli – stone) is one of the three caravanserais located in Baščaršija. It was built between 1540-1543, at the same time as Gazi Husrev-bey’s bezistan, as an endowment of Gazi Husrev-bey. It is believed that this inn served more for trade than the passenger traffic. The complex of this caravanserai was upstairs, built of stone and tufa. The ground floor rooms were covered with brick arches, and the first floors with domes.

On the ground floor there were warehouses for storing goods and shops, and on the first floor there were rooms for lodging. It was formed as an irregular quadrangle, 47 meters long, with an inner courtyard. In the central part of the courtyard there was a fountain, and above it a mosque on pillars. Tašlihan has burned several times throughout history and was rebuilt. It was last burned in 1879 and has not been rebuilt since. Today, the stone remains of this caravanserai near the Hotel Europe are visible.