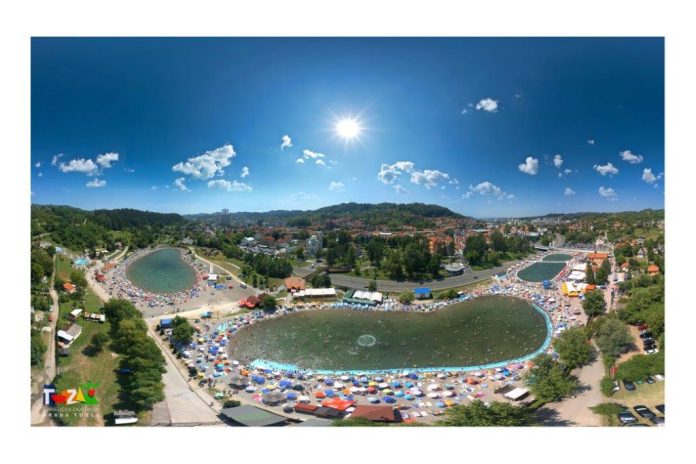 The Tourist Board of the City of Tuzla, but also the entire city is largely preparing for the upcoming summer tourist season. In recent months, in addition to appearances at tourism fairs in our country and in the region, we worked on promotion of the tourist offer, which is certainly based on the unique salt lakes in the heart of the city – Pannonica.

– The summer season and commercial work of the Pannonian Lakes began on June 1, and the grand opening was held from June 16 to 19 with performances by Crvena jabuka, Helem Nejse and Muha, as well as with a fair presentation of about 15 domestic producers, sports and entertainment content and all-day entertainment at Pannonica – said Jaganjac.

According to her, together with the relevant services of the city, public cultural institutions, and civil society organizations, they have designed a rich program of cultural, entertainment, and sports projects and events that will complete the tourist offer of the city this summer.

-In addition to the traditional event “Ljeto u Tuzli/Summer in Tuzla”, we from the Tourist Board of Tuzla have financially supported 19 projects and events of civil society organizations and private entrepreneurs, which will offer all visitors to Tuzla in the summer theater performances, performances by musicians, Džumbus Festival, skateboarding sessions, motorcycle meetings, exhibitions, hiking trips, dance performances, the Festival of Contemporary Women, a bicycle race, and numerous other events – she emphasized.

Apart from the Pannonian Lakes, Jaganjac says that visitors can also see Freedom Square, the largest square in BiH, and the central place on this Square is occupied by a large fountain decorated with stećak/toombstones.

-Not far from this square there is the Soni Square, with a museum display, preserved remains of an old salt well and a stylized fountain in the shape of a Neolithic salting vessel that tells the history of salt production and the tradition of multiethnicity of Tuzla. In the city center is our city park, which is connected to the Pannonian Lakes complex by a pedestrian bridge, and the park is adorned with a monument to the first Bosnian king, Tvrtko I Kotromanić, and a stone obelisk with the text of the Charter of Kulina Ban – she says.

– For sports fans, there is also a unique House of Sports, which is a multimedia exhibition inspired by the pride of Tuzla and the hundred-year tradition of Sloboda Club – said Jaganjac.

Pannonian Lakes are the crown of the tourist offer and a destination that attracts more and more visitors every year. At least 380,000 visitors are expected in Tuzla this year.

-Moreover, we expect that the overall statistics of visitors and overnight stays in the City of Tuzla will return to the level of 2019, because in 2021 we have already recorded a significant positive trend in the growth of tourist traffic. It is worth mentioning that in the total amount of paid sojourn taxes in the entire Tuzla Canton, Tuzla participates with more than 60 percent, and we will continue to work to increase these indicators – said Jaganjac.

The Kaleidoskop Music Festival is one of the largest in BiH. After a few years break, the festival returns in its full colors. Festival can certainly become one of the backbones of the tourist offer in the city.

-Our festival Kaleidoskop is finally returning to its audience this year and we are working with special joy on the preparation of all the contents that the Festival will offer this year. This year, the Kaleidoskop Youth Art Festival will be held in Tuzla from July 26 to 30, and the audience will have the opportunity to listen to bands from Bosnia and Herzegovina, Croatia, Serbia, Austria, and Switzerland – she said.

-At the opening of the Festival, July 26, there will be an exhibition of our Tuzla artist, Jasenko Đorđević, who creates miniatures-sculptures on graffiti, or on the heart of a graphite pencil, and in the musical part of the opening of the Festival Sarajevo band Velahavle will perform. Festival will traditionally have its own art market for young artists, who will be able to exhibit and sell their handicrafts, and their works and creative products will adorn our city park during the Festival. We really hope that a great number of visitors from all over Bosnia and Herzegovina will come, not only because the entrance to all events is free, but because we offer young people the opportunity to network, present their work, share experiences, and have fun – said Jaganjac in the end of our conversation.