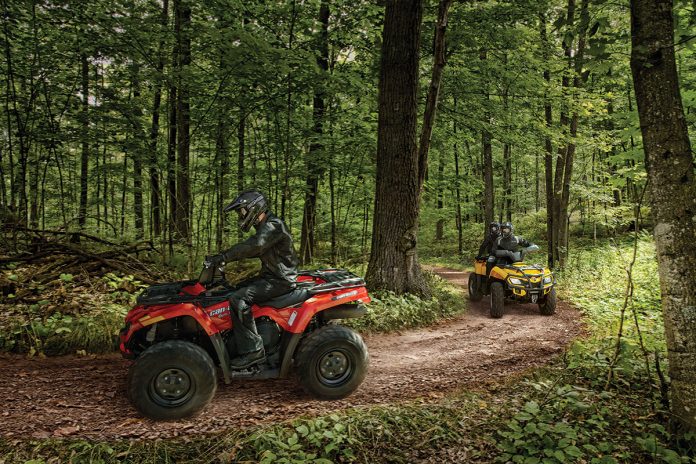 The project “Koridor 100 – First Bosnian Safari”, the first of its kind in Bosnia and Herzegovina, whose carrier and designer is Panta Rhei agency from Sarajevo, has existed for several years in our country. This specific form of adrenaline tourism attracts hundreds of domestic and foreign tourists from all over the world during the year.

In addition to the unusual driving style of the eco-motor four-wheelers in the summer, and snowmobiles in winter, all participants have the unlimited possibility of enjoying the beauty of nature that our country abounds.

Safari is held under the slogan “Get dirty or Leave”, and the ride starts from the village Vrutci. Shorter driving trips in quads last for two hours. During the ride, you will pass besides the necropolis and reach the spring of the untouched river, the spring where, according to the legend, Alija Đerzelez, leaning on with hot hands to drinking water, left a hand print.

The short tour ends in Podlipnik, and when you take a longer one, the tour goes to Knežine following two rivers, one upstream and one downstream and returning point is again village Vrutci. Lunch is organized in the village, where local housewives bake homemade pies in an old furnace, and home-made sour milk is offered as a refreshment.

– When we began, people found us a little weird, they wondered what was that we were driving and how we do it. Now, in ten to 15 places in Bosnia one can drive quads, and it is organized collective driving. This has become a recreational activity that grows year after year, and an increasing number of people come to experience this, or buy squads privately, because driving is allowed here, while in Croatia, for example, it is not allowed to drive in the forests – says Mesud Rizvo, director of the agency Panta Rhei.

Usually, those interested in Bosnian safari are foreigners, while in Bosnia and Herzegovina we did not develop tourist culture for such things.

– The official club of fans of driving quads does not exist in Bosnia and Herzegovina yet, but for two or three years, we have been working on the establishment of one. We have organized socializing via Bombardier, but other manufacturers of squares, like Polaris, have their annual gatherings, where they ride for two days. This year we will have one organized tour from Sarajevo to Zelengora – continues Rizvo.

He points out that even when the Bosnian safari is concerned, the assistance and support of those responsible for tourism is absent and does not exist.

– The state is working in such a way to extinguish one, and opens up another tourist community. No one has ever called me, let alone offered anything to improve this project. We addressed various people, but we were left without answers. At the very beginning of RTRS we received the “Golden Tourist Rose” for the project we launched. I repeat, from the entity television of the smaller BH entity. The state should and has to help us, because the foreigners told us long ago to hold on to tourism and agriculture, because that is ours. Driving quads, rafting, and similar things are something that has a nice link with Bosnia and Herzegovina. For example, the necropolis on our path, which is located in Brus, and where there is a special tomb with three stands, is one of a kind in Bosnia and Herzegovina,  and it can be reached only by foot or by quads, and since life is fast and mountaineering is not that popular anymore, then this itself is an answer to the question why we need this type of tourism – concludes the initiator of the first Bosnian safari.

Airsoft – A team game full of adrenaline and fun