The European Youth Olympic Festival (EYOF) 2019, to be held in Sarajevo and East Sarajevo, from February 9 to 16 this year, is a great opportunity and a chance to send a new picture from Bosnia and Herzegovina to the world.

EYOF is the biggest sports festival for young athletes between 14 and 18 years of age, and during the EYOF, competitions will be held in eight disciplines, that is, eight sports arranged at seven venues.

Alpine sports and disciplines from the alpine program will be held in the Olympic Mountains Jahorina and Bjelašnica, biathlon competition in Dvorišta, cross country on Igman, and snowboarding on Bjelašnica.

When it comes to “ice” competitions, in the Olympic hall ‘Juan Antonio Samaranch’ – Zetra a tournament in hockey will be held, ‘Skenderija’ will host a competition in art and fast skating, and in Pale, in the hall ‘Peki’ competition in carling.

Participation in EYOF in 2019 was confirmed by 46 member states of the European Olympic Committee, and the number of participants is around 1,600 athletes together with their trainers. Another 200 to 250 foreign guests, delegates, judges, technical delegates and other officials, representatives of international sports federations are expected …

Benefits of the EYOF organization are multiple. If viewed from a sporting perspective, then it is necessary to know that the organization of such a sporting event certainly represents the basis, the presupposition for organizing all future big competitions in these disciplines.

This is not just a sporting event, but the expansion, above all friendship, building trust among people, especially among young people, in some ways it risis and represents a new development phase of Bosnia and Herzegovina.

The BiH Presidency is the general sponsor of this event, and the entity governments have allocated significant funds. In addition, they participated in the construction, adaptation of the venues and infrastructure works. There are also the host cities, Sarajevo and East Sarajevo as the bearers of this activity, as well as the Olympic Committee of BiH, which makes a significant contribution to the organization of this competition.

The ceremonial opening of the EYOF 2019 is scheduled to be held at the Olympic stadium Asim Ferhatović Hase on Koševo, and the closing ceremony is scheduled in East Sarajevo, at the stadium of the football club Slavija. 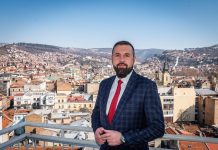 Magoda: Tourists are coming back to Sarajevo Can you imagine what a city filled with nature would feel like?

View of Sarajevo between the two world wars