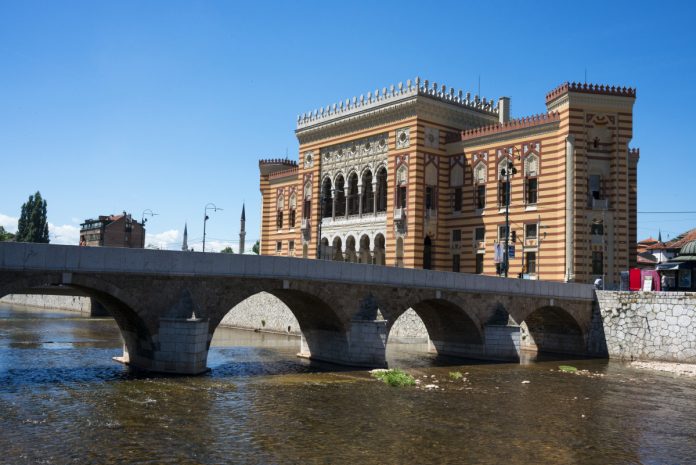 One of the most beautiful and most representative objects from the Austro-Hungarian period in Bosnia and Herzegovina is the Sarajevo City Hall. It is the most luxurious building built in Sarajevo during the Austro-Hungarian occupation and represents a kind of world symbol of the encounter of civilizations, and it is one of the most photographed cultural and historical buildings in the capital of Bosnia and Herzegovina.

It was built at the end of the 19th century, and it was originally used as the seat of the City Administration. In addition to the city administration, the District Court of Sarajevo and the Bosnian Parliament were later placed in the City Hall, after which the City Hall became the City Library, that is, the National and University Library of Bosnia and Herzegovina.

One of the most devoted architects of the time, Czech Karl Parzik, made the first project of construction in 1891 but Minister Benjamin Kalaj did not like it, and he asked for changes, to which Parzik did not agree and gave up on further work. After that, the creation of a new project was entrusted to Alexander Wittek, designer of Sebilj at Baščaršija. Kemal II Mosque served as a model for the construction of this project, which is why he went to Cairo twice.

There are interesting stories of how this project  put an end to Wittek’s life. According to the urban myth, due to remarks that there is not enough light in the main hall of the building, he allegedly became mentaly ill and committed suicide. On the other hand, it is believed that he was ill and died in a hospital in Graz in 1894. The completion of his project was commissioned in 1894 to then thirty-year-old Ćiril M. Iveković. The City Administration building has been and remains his most successful project, although it is difficult to estimate his actual contribution to the final solution, since he has just worked out an existing solution.

On 28 June 1914, the City Hall was at the center of the events that signaled the beginning of the First World War. Franz Ferdinand and his wife Sofia had just met with city leaders in the City Hall before being thrown to death.

The City Hall was for the second time in the center of world events after being burned and destroyed in the night between August 25 and 26, 1992 by aggressive shelling. The whole building was turned into a torchlight, and about two million library units irreversibly disappeared into flames. The building of this national treasure was then a symbol of the siege and tragedy of Sarajevo.

For years, ruins of this beautiful building reminiscent of the war, and the renovated City Hall again shone with the former glory on May 9, 2014.

It is interesting, when it was decided that the City Hall would be built on Mustaj-pasha’s square, it was necessary to demolish two hans and one private house.

The City Hall was built at the place where Sarajevo was founded. When the Austro-Hungarian authorities decided to build the City Hall, there was a need to remove some of the buildings at that location. Among these buildings, there were two hans, and this house. The house was not at first a disturbance for construction of the City Hall, but it later became due to development of the tram traffic.

Hans were demolished, the owner of the house demanded to be payed by ducats as compensation, and that the house be transferred to the other side of the Miljacka River, opposite the Town Hall. So it was done, and because of the owners ‘spite’ houses was called House of Spite (Inat kuća), which is today a restaurant with a traditional Bosnian cuisine and has the most beautiful view of the Sarajevo City Hall.