Even before 1200 years Bosnia was an independent state with all the attributes that characterize it as such. It had its rulers, court, diplomatic service, archive, army, well-guarded borders, their own money, their own alphabet (bosančica), their religion (Bogomilism) … All its rulers belonged to the local dynasty Kotromanić, and documents state that they “ruled Bosnia from its foundation” and it survived until the arrival of the Ottomans in 1463.

The earliest documents, starting from the 10th century, do not mention the names of the first rulers. They are simply called “Bosnian Ban”. Nevertheless, the documents are very important because they indicate the existence of the Bosnian state. The first whose name was mentioned was certain Stephen (Stjepan) who was on the throne in the 11th century. From the 12th century data are more complete, and from that time until the fall of the Kingdom in 1463 all bans, kings and queens who ruled Bosnia are known to us.

About the age and origin of the Bosnian Dynasty Kotromanić wrote their contemporaries. A document from the 13th century says that they are “the rulers of Bosnia since olden times,” and King Tvrtko I, in one of his charters, says that Kotromanićs ruled Bosnia “since its genesis.” The first rulers of Bosnia carried the title of Ban. Tvrtko I, in 1377, was crowned a king and since then Bosnia is the kingdom. Besides Kulin Ban, he is the most famous ruler of Bosnia. In his time, Bosnia represented a respectable force in this part of Europe. 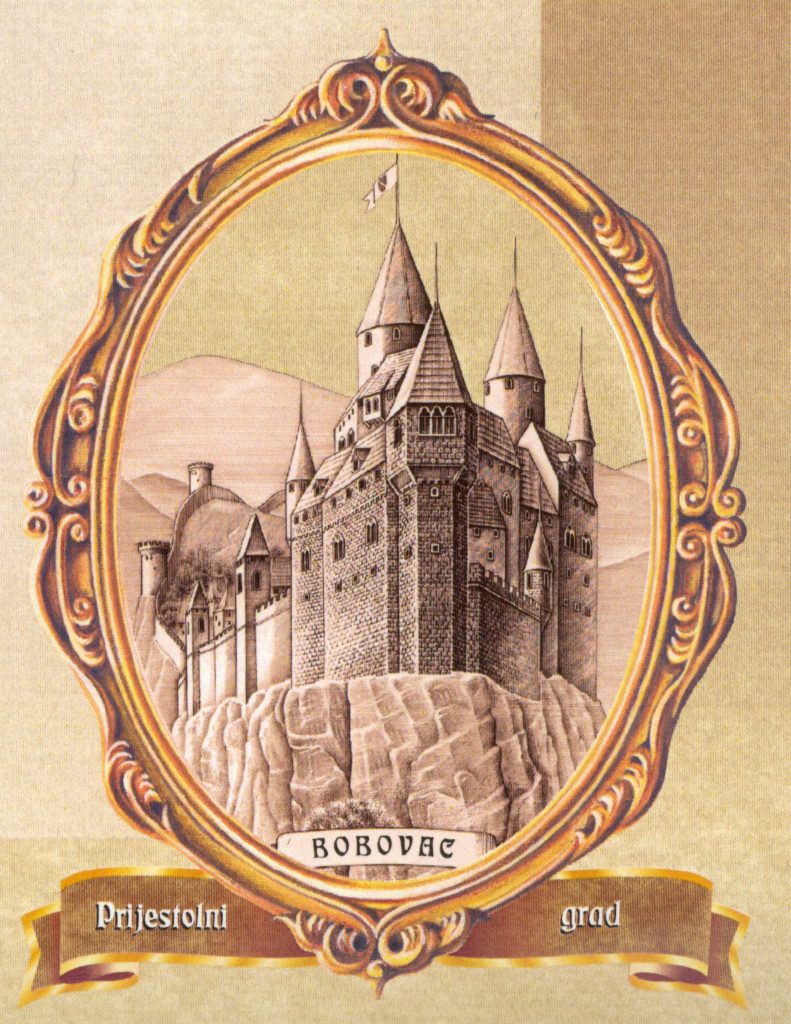 Tvrtko was succeeded by Dabiša, and Dabiša by queen Jelena Gruba, after her it was Ostoja, and after him Ostojić. He was followed by Tvrtko II, then Tomaš, and then Stjepan Tomašević. Let us mention that Bosnia is the only country in the South Slavic area that had a female ruler. It was Jelena Gruba, which inherited King Dabiša on the throne. She ruled from 1395 to 1398. It is well known that the Bosnian throne has never been occupied by someone who did not belong to the local dynasty Kotromanić. There have been some attempts, but nobility never allowed it, nor did Bosnian people.

The first Bosnian capital was in Moštre near Visoko. There was a court of Kulin Ban, as well as his predecessors, and successors. At the beginning of the 14th century it was transferred to Bobovac fort, which was located deep in the hills above Kraljeva Sutjeska near Kakanj.

About appearance of Bobovca we know from the description of contemporaries and through archaeological finds. Thanks to these data faithful reconstruction of the city was made. The city was surrounded by walls long more than one kilometer, with a lot of towers, drawbridges and moat. At the top of the hill, with steep falls, tops of the towers were touching the sky, among which stood out “the royal tower“and watchtower, where day and night the flag of Kingdom with golden lilies was flying.

We are well informed about the members of the Bosnian dynasty thanks to the great interest of contemporaries for Bosnia and what happened in it. It is known that it was in kinship with many European courts. Bosnian princesses were married in European courts, and their princesses were coming to Bosnia. Kotromanićs have thus come into relationship with German Helfenstein, Spanish Aragonese, Bulgarian Šišman, Hungarian Anjou, Austrian Herman, Serbian Nemanjićs, Croatian Šubićs, Polish dynasty …

Although Bosnia lived through many wars and devastation, the remains of most of the members of the dynasty were preserved. Two of their mausoleum were revealed. The first was in Arnautovići near Visoko and the other in Bobovac. The first one contained remains of King Tvrtko I, with seven more skeletons of which is not established with certainty to whom they belong, but it is certain that those were members of the dynasty as well. Most likely, those are his ancestors, including Kulin Ban and then bans Prijezda, Ninoslav …

The most valuable findings from the  tomb is his cloak which archaeologists found placed exactly the way it was left during his funeral in 1391. It was thrown over the tombstone under which Tvrtko was buried. It is decorated with gold embroidery with motifs from the coat of arms with six golden lilies.

In Bobovac mausoleum, kings who ruled Bosnia after the death of King Tvrtko I (1391) until the fall of the kingdom (1463) were found. On all the graves were standing medieval tombstones (stećak), as it was common in medieval Bosnia.

Fate of the last Kotromanićs

Attack of the Ottomans was unexpected and so fast that they were all surprised, people and feudal lords and members of the dynasty. This is the reason that almost all Kotromanićs ended unfortunately. King Stephen Tomašević, his uncle Radivoj and others, were executed in Jajce. Princess Catherine, who was minor at the time, and Prince Sigusmund were captured in Zvečaj on Vrbas and taken to Turkey.

Their mother, Queen Catherine, was in Kozograd over Fojnica when Ottomans came. From there, she managed to escape to Dubrovnik, and then continue to Rome where a few years later she died. Queen Mara, wife of Stephen Tomašević, rescued herself and escaped to Hungary. Although all of this has happened more than five hundred years ago, until today people retained the vivid memory of them, their palace, and that is handed down from generation to generation for centuries.