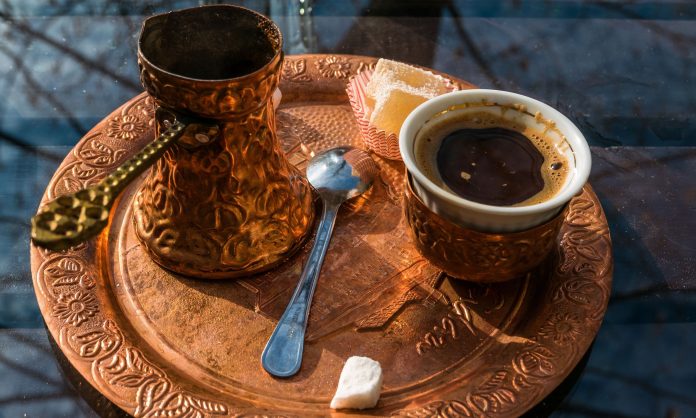 For centuries, people in Bosnia and Herzegovina created a cult of good coffee, perfecting frying, grinding, baking (cooking), serving and eventually drinking it to the most subtle details. Today, every Bosnian, one with a traditionally fine taste, will give approval for only one way of preparing real Bosnian coffee.

One such person is Mustafa Traljo, the descendant of the father Salko and grandfather Mustafa, residing in the old part of Sarajevo. The house he lives in with his family, which he inherited from his grandfather from his mother’s side, Mahmut Subašić, is more than 200 years old.

While giving us a tour through its most beautiful part – čardak (attic) – which, due to its decorations and the way it has been built, best illustrates how people once lived, Mustafa begins his story of Bosnian coffee. In his earliest youth, while he was still running through the streets with his friends, the scent of freshly grinded and cooked coffee would spread its nice smell, from surrounding small Bosnian coffee shops, around the streets.

– I remember like it was yesterday. In the morning, I would be awakened by the smell of coffee that grandmother would make immediately after her and my grandfather would open their eyes in the morning. They would sit on the sofa for a long time, arranging who would do what that day, sipping from the small cup. The children were not allowed to drink coffee, but sometimes, when older family members did not watch, we would at least dip in sugar cubes, and secretly put hands full of it in our mouth and run down the street – Mustafa recalls.

The real Bosnian coffee has its own sequence of preparation, but also serving and drinking. Mustafa knows this well.

– Primarily, it’s important from whom to buy raw coffee. What is the grain like, color, shape, smell, and then grandmother would, at least once a week, fried the grains in the coffee roaster called šiš and put it in the special box. Before cooking, coffee would be grinded in the mill, and then the mother or grandmother would prepare it – he says.

A bride would put finely roasted, fresh coffee beans that are pulverized into a fine powder, in a slightly heated copper-plated pot with a long neck, called džezva. Then, she would pour the boiled water over the coffee, stir well and return to the stove to “rise” to the top of the pot, not to go over the pot – says Mustafa.

Coffee would stay still shortly, in order to let the sludge stay on the bottom of džezva, then they would pour it into small cups. Sugar, rahat lokum, a Bosnian candy that foreigners might call Turkish delight, and milk should be served separately and added as desired.

The foundation of social life

– Coffee used to be drank slowly, with a pleasure, without a haste. Today it’s different, it’s usually drunk quickly because everyone is in a hurry, but there are still those who do it the right way – adds Mustafa.

Bosnian coffee has always been at the heart of people’s lives. With it, everything would start and finish – morning, afternoon, business would be done while drinking a cup of coffee, it goes with happy and sorrowfull moments. This has been so until this very day…

Since Bosnian coffee has been the backbone of social life in our country for centuries, different names for it have developed over time, depending on the occasion in which it was drunk.

– First morning coffee, while you’re still struggling to open your eyes, needs to be stronger and smoother so that it wakes you up. The one that you drink later during the day must be taken with company, in order to socialize. When you are taking a break from the morning work you drink a cup or two, and then you take a nap. You have an option to pour some hot water over the sludge of already drank coffee, and finally there is a kind of good buy coffee for guests who are about to leave your house – explained Traljo.

Zdravko Colic prepares spectacle for “the craziest night”: It is a...