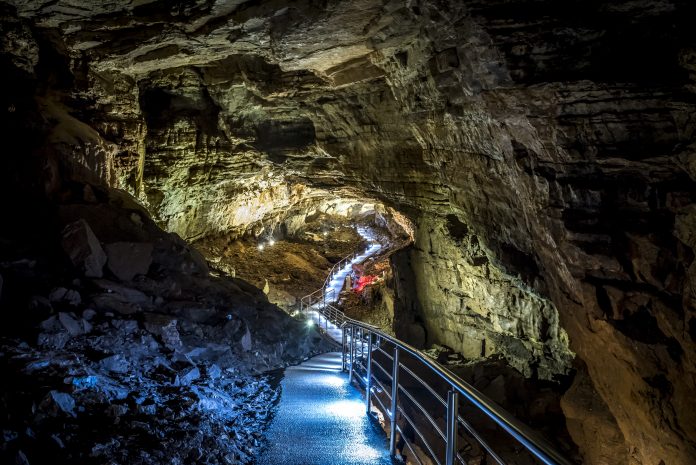 Vjetrenica is the most beautiful cave in Bosnia and Herzegovina. It is located in the municipality of Ravno, in the very south of Herzegovina. Because of the proximity of Dubrovnik and the Adriatic Sea, it is the main tourist destination of this part of our country.

It is located on the edge of Popovo polje, and is mentioned for the first time in the middle of the 1st century. It was opened in 1968 and it was possible to enter it by 1990 and due to the war, it was closed until 2010. The cave, according to records from 1977, is about five million years old.

Teo Tomić, a guide in Vjetrenica (word origin: vjetar – wind; translation Windcave or a blowhole), says that the cave got its name by the wind that appears only in the summer. He points out that the temperature in the cave, as well as the water in the lakes is 11 degrees Celsius throughout the year, and that due to temperature difference and pressure strong winds are blowing, and so far, a velocity of 25 meters per second was measured.

– The cave was once a riverbed and everything that can be seen in it was made by water. It is 22 km long and only seven kilometers of it is explored, while the tourist path is about 600 meters long. The researchers did not go further because of the narrow channels. Its length was determined by additional research when it was established that it had a way out to the island of Šipan in Croatia – said Tomić.

The cave Vjetrenica is extremely rich in flora and fauna, and it contains about 200 different species of which there are 37 endemic species. Certainly, the most famous is olm or cave salamander.

– It is a magnet for every visitor. There’s a great number of the fish. The habitat of olm is in the lower part of the cave Vjetrenica. Almost every channel is a habitat for this fish, but they are hard to see. They feed on microorganisms from the water and can withstand up to ten years without food due to their slow metabolism. They can grow up to 25 centimeters and live for over a hundred years. Photographing an olm is forbidden – says Tomić.

According to him, between 15,000 and 20,000 tourists visit the cave annually and most of them come during the summer period.

– It is interesting that we recorded the arrival of visitors from all over the world, but Europeans are our most frequent guests. A wedding was held in the cave, and in 1975 a movie Winnetou was filmed here. In addition, the concert of the Mistik Quartet has been announced – Tomić says.

The cave is still active, which means that its ornaments, stalactites and stalagmites are renewed. According to him, at the very end of the tourist path there is one of the most beautiful stalagmites that, due to its appearance, is called “Turkish cemetery”.

Furthermore, the trail leads to the “Hajdučki stol”, the stone blocks that are placed as a table and chairs. They were originally found in the cave and it is assumed that hajduk (plural hajduci) – former outlaws and guerrilla fighters of the Balkans – were hiding there during the Ottoman rule in Bosnia and Herzegovina.

– Traces of human life were found in the cave and everything can be seen in our museum. It is assumed that people lived here five to six thousand years ago. At the very entrance, there is a replica of a cave bear that lived there 10,000 years ago. Its remains, as well as the skeleton of the leopard found there, are exhibited at the National Museum of Bosnia and Herzegovina – says Tomić.