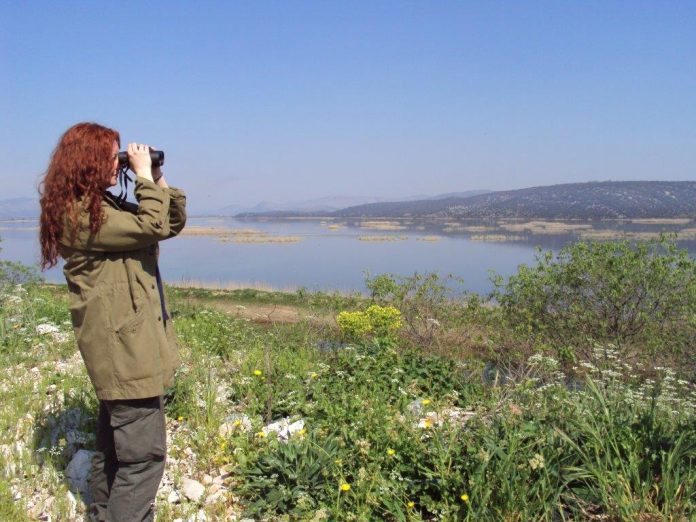 The Ornithological Society “Naše Ptice” is a non-governmental, non-political, and non-profit organization that primarily deals with the study and protection of birds and their habitats. Their work is divided into several segments, and the most important is research work focused on collecting data on the local bird population using modern methods, from ringing birds to monitoring their movements using transmitters. Moreover, they regularly do mapping of bird breeding and winter counting of birds of aquatic habitats in order to collect the highest quality qualitative and quantitative data.

-The results of this are the identification and declaration of areas of international importance for birds (Important Bird Area – IBA areas), as well as several activities to preserve specific habitats and species. The research work is related to educational work with different ages and social categories, from preschool children to the oldest, through lectures, workshops, and thematic trips. The third group are promotional activities, which primarily relate to promotion of birdwatching and promotion of dates related to birds or nature in general. All this is accompanied by publishing activities, from scientific-professional journal “Bulletin of the Network of Birdwatchers in Bosnia and Herzegovina” to several publications, manuals, leaflets, posters, and similar materials – says Nermina Sarajlić, research ecologist at ” Naše Ptice” in an interview with Magazine Visit BiH.

What is the level of protection and care for birds in BiH?

-Unfortunately, the protection and care of birds in our country is at a very low level. Although there is a certain sensibility among the citizens, and the legal bases are gradually improving, in practice everything is completely different. Poaching is very present, even in protected areas. Capturing and killing birds, destroying nests, and appropriating birds is not considered a crime by most citizens and is rarely reported. There were several cases when fishermen’s and hunting associations and beekeepers’ associations found the “culprits” for their problems in birds and publicly called for the killing of species that are protected in BiH. We do not yet have an asylum to accept and recover injured individuals. Also, very few young people are interested in getting more seriously involved in research and protection of birds and nature in general.

How many societies in BiH are engaged in the protection and conservation of birds, especially endangered species?

-Our association is the only one in BiH that strictly deals with birds, i.e., wild populations (to avoid confusion with fellow breeders who have identified themselves as an ornithological association), there’s a few other non-governmental organizations dealing with nature protection and part of their activities they dedicate to birds. As an example, we will mention our long-term associates the association “Naša baština” from Tomislavgrad, “Novi Val“ from Blagaj, the Ecological Association “Lijepa naša” and the Association “Čaplja” from Čapljina and the Center for Environmental Protection and the Society for Research and Protection of Biodiversity from Banja Luka.

How many endangered bird species are there in BiH?

-So far, 351 species of birds have been recorded historically, some of which have completely disappeared today, such as vultures and great bustards. In general, all birds are more or less endangered. The most endangered among them are those that are under great pressure due to the killing or destruction of habitats, primarily species related to wetland habitats, which suffer due to draining, fire or exploitation of peat, and predators. The second category includes numerous singers who are illegally hunted in BiH and smuggled across the border for the needs of restaurants in Italy, where the meat of singers is considered a delicacy. Bird breeders often catch goldfinch and chaffinch using net or glue, especially in Herzegovina and Central Bosnia. A significant number of birds also die “accidentally” from poisoning, collisions with power lines or wind turbine propellers. Finally, due to ignorance, arrogance or superstition, owls, storks, cranes, cormorants, pigeons, crows often die …

Highlight some projects and events that you organize in BiH with the aim of preserving and protecting birds?

-From the scientific-research part of the paper, we are especially proud that for the first time we started ringing birds in BiH with rings of our markings. There is also regular work on the winter counting of wetland birds, which we have been working on non-stop for almost a decade and a half. We participated in the collection of data for the creation of the Second European Bird Breeding Atlas and now we are trying and hope that we will succeed in making the First Atlas of Bird Breeding in BiH. We must single out the Ornitofestival, which we have been organizing since 2012, with the aim of promoting BiH’s cultural and natural treasures through areas known for birds, every year in a different place and every year in cooperation with another local NGO. In addition, we regularly celebrate International Wetlands Day, World Migratory Bird Day, and European Birdwatching Weekend in an effort to motivate citizens, especially young people, to get involved in our activities. Among the programs intended for young people, we will single out Spring Alive, which aims to introduce school and preschool children to migratory birds and the importance of preserving their habitats, and from the “more serious” projects BalkanDetox LIFE Project, which aims to combat wildlife poisoning and Adriatic Flyway whose fourth phase is coming to an end, in which non-governmental organizations from the Balkans, in cooperation with the EuroNatur Foundation and with the support of the MAVA Foundation, are working to combat bird poaching on the Adriatic Migration Route.

Can birdwatching become a tourist offer and attraction in BiH?

– Over and above, it already is. Perhaps not so much emphasized, but the example of the Perković family from Livno and their small business called Sturba.ba proves that birdwatching is an interesting tourist brand to invest in, both in infrastructure and in the training of guides.

There were griffon vultures in Herzegovina. However, they were poisoned. Is there a project to repopulate this severely endangered species or do they only appear in overflights?

-It is one of the saddest ornithological stories in our country. At the beginning of the last century, BiH, along with Greece and Spain, was the only country where all four species of European vultures could be seen – and today we do not have any. We only see them if they accidentally fly over here, looking for food. An attempt by colleagues from Blagaj to reintroduce the griffon vulture failed, all the birds were poisoned and to this day we do not know who is to blame for that. Such a program, as well as the program for the little black grouse, requires great efforts, people and resources, and especially the support of the local community.

What are the rarest and most exotic bird species we can see in BiH?

We don’t have those “fancy” species like the ones you can see in Africa, Asia, or South America. Yet those who once see a bee-eater, a white-tailed eagle, a great black grouse or cranes in migration will remain forever in love with birds. Among the few, we will single out the European roller, there has been no data on its presence in BiH since 1918, until it was seen again in 2010 in the vicinity of Tomislavgrad. In the last few years, we have recorded the appearance of ibis, so in addition to glossy ibis, which nests in Hutovo Blato, bald and holy ibis have been noticed too.

Is BiH a member of some international organizations for the protection of birds?

-Our organization is a member of EURING, the international organization for bird ringing, and we are currently working on strengthening the capacity to join the partnership with BirdLife International. As far as the state is concerned, it is a signatory to several international conventions that prescribe the protection of birds, but apart from the paragraph on paper, little is being done in practice.

Where in BiH are there the most birds, whether it is a migratory or permanent habitat?

How to help strengthen organizations involved in the study and protection of birds?

– There are two basic ways. The first, which is more about individuals – join us and be a member, so your work can help you get to know better and protect species and habitats. Others, which are more related to businesses – you can support our activities in the form of sponsorships or donations. As we like to say, “Become a friend of birds too!”

Nicola Minasi, the new Italian ambassador to Bosnia and Herzegovina: B&H is...