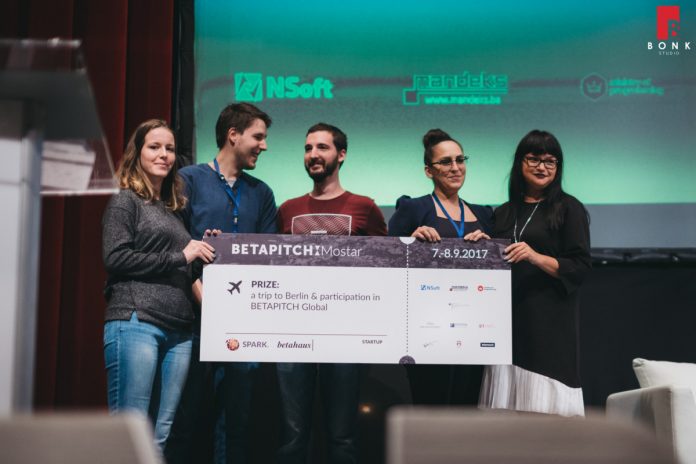 SPARK’s startup VRET is lining success after success. In mid-December, they took part in Investors Day in Berlin, where they won the second place and a trip to the Silicon Valley in San Francisco. A group of young people from Mostar at the BETAPITCH Global Competition in Berlin presented itself with a software solution of virtual reality used in the field of psychology and psychiatry.

– The product allows psychologists and psychiatrists to provide their patients with safe and effective treatments without side effects. With the help of external collaborators, clinical specialists, we made 3D views that represent triggers for certain disorders and phobias, such as fears of heights, spiders, cramped spaces, and similar. Each display for a particular disorder and phobia contains the stages according to which the patient is exposed in certain terms – says Iva Đikić, project manager in VRET.

A team from Betahouse worked intensively with them in Berlin, they even had help of an actress who advised them how to present themselves as best as possible, what facial expressions they should have and how to move.

– We won the second place and ensured ourselves a trip to the Silicon Valley, which is sponsored by Betahaus from Berlin. Betahaus is in talks with the Silicon Valley team about the details of our departure. We are delighted with the departure, however, we gained more respect due to the praises of the jury, which consisted of a number of experts, some of whom are from Google. When such important people who have ten or more years of IT experience praise you, then you are even more excited about this feedback, because it is evidence that we are on the right track and that we are doing the right thing – says Đikić.

A large number of investors attended this event, so we asked Đikić if they were interested in their startup.

– In the last months, we are visiting conferences and congresses that are accompanied by a large number of investors. Of course, there are those who are interested, and it is up to us to choose the opportunity that is the best and most suitable for us. Nevertheless, our most important expectation is to help as many patients as possible and make life easier for them every day – she says.

As she says, they are currently focused only on VRET and the software solution they develop within SPARK BUSINESS PARK.

– The very beginning was difficult, while some of us still had obligations at the faculty, and some had a permanent job. We have seen the potential in VRET, and now we have directed all the energy to its development. We do not want to focus now on ourselves, but to show that there are so many good startups and ideas from Mostar, Sarajevo, Banja Luka, Zenica, Tuzla worthy of attention – said Đikić.

Startup is a young concept, and people are mostly not familiar with it, she says, but they hope to create a system in the future, in which startup players will be at the center of attention, as young entrepreneurs are one of the most important factors in B&H development.

– The problems we encounter here do not exist in the world and that is exactly what makes us specific. We’re used to everything and wherever we appear we find our ways through it. The year 2018 is reserved for opening the company, investing in sales, creating jobs and new solutions, as is the solution for PTSD, and we will work on this together with the VR Medical Center in California – reveals Đikić at the end of the conversation.

Džanan Hamza, chef on a ship cruising across Europe: I often...