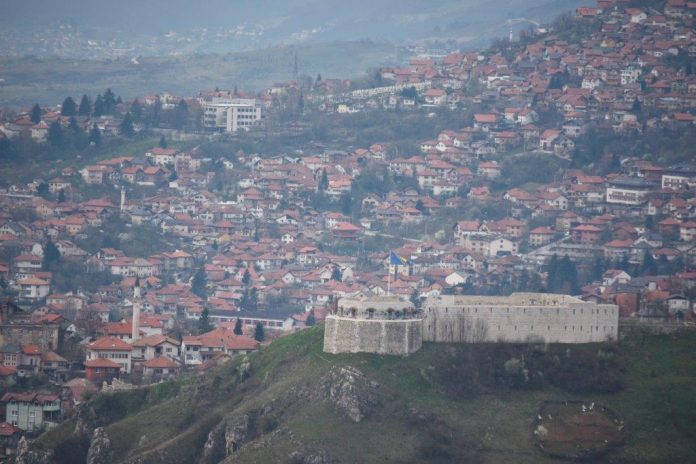 It is located on the southeastern slopes of Sarajevo, hiding in the stone mantle the history of the city from the Middle Ages to the present. It is certainly one of the most impressive and valuable objects of the architectural heritage of this area.

Bijela tabija’s dominant position in relation to the natural amphitheater of the historic city center, and the view that stretches along the Miljacka River all the way to contemporary residential settlements in western Sarajevo, make specific, almost entirely natural, choreography of nature and human creativity.

Bijela tabija is a fortress on the Dariva – Mošćanica road, on the eastern elevation of the Sarajevo basin. It was erected on the site of a medieval fortress, built around 1550. From its beginnings to the 1970s, it housed an army. Then, the Yugoslav army withdrew and gave it to the City of Sarajevo for use.

It is located within the architectural ensemble of the Old Town of Vratnik, which has been proclaimed a National Monument of Bosnia and Herzegovina and is located on a hill that offers a fascinating view of Sarajevo and its surroundings, and was one of the five forts (tabija) that formed the defensive rampart of the old town Vratnik.

On March 21, 2005, the Commission to Preserve National Monuments issued a decision declaring the architectural ensemble-Old Town of Vratnik in Sarajevo a national monument of Bosnia and Herzegovina.

From Bijela tabija, the view goes east to the Old Town of Bulozi, to the south to the entire north side of Trebević and the Miljacka Canyon, and to the west to Sarajevsko Polje and the hills around it, and to the east to Faletić and Hreša. Two trade and military routes passed through thus area – the first via Vratnik, Hreša and Mokro to eastern and northeastern Bosnia and, the second, through the Miljacka valley to Goat’s Bridge and further to Pale and upper Podrinje.

In the Middle Ages, there were small fortification in the area of ​​Bijeli Tabija, mentioned and described by travelers passing through Sarajevo in the 16th century. Moreover, early Ottoman sources indirectly speak of the existence of a fort on Vratnik.

Evliya Çelebi, who lived in Sarajevo in 1660, gave a relatively complete description of the fort, saying that it was a small one, built of stone, measuring four hundred steps, and was built before the Ottomans conquered the area. After the establishment of Austro-Hungarian rule, the interior was demolished and the central area flattened. Bijela tabija was also the topic of songs.

In the 18th century, well-known Morić brothers were murdered within its walls, condemned by the central government for opposing economic and other levies as the most prominent representatives of the Sarajevo citizens and local janissaries. Mula Mustafa Bašeskija also wrote about this, stating in his “Ljetopis“(Chronicles) that an earthquake occurred in Sarajevo after the execution of the Morić brothers, because they were unjustly killed.

The famous bridge on the Drina River: Višegrad Bridge that the...