He was born in Austrian Linz from father half-Bosnian, half-Slavonian and his mother is from Zagorje, and from the age of seven he lived in Bosanska Gradiška, where he finished elementary and high school. One of the more difficult questions is when they ask him where he is from. He replies that he is from Bosnia and Herzegovina, Croatia and Austria. He grew up in Austria, Bosnia and Herzegovina and Croatian Zagorje.

He is Saša Amidžić, the chef who recently delighted his colleagues from the Association of Chefs of Bosnia and Herzegovina in Sarajevo.

-In Bosanska Gradiška, I graduated from a cooking technologist school and, of course, I never thought of doing this. Who would have had the desire to cook at that time, if we remember the then-kitchens of almost semi-failed companies? The practice was reduced to washing dishes – said Amidžić.

Broom in the hand

He still had a cooking nerve. Remaining alone he imitated his mother, who was an excellent cook.

-Rolling the dough with a pin in order to make a pie, she transformed the dough into the most beautiful canvas. Yes, a woman from Zagorje stretched it to perfection, her noodles, cakes, were pure magic. My father was a master in the kitchen. When he would make a pie he would lock himself and let down the blinds, because there was a fear that at that time his neighbors could find out what my hero was doing – laughs Saša.

After finishing school, he got his first cooking job in Slovenia. The deserted little restaurant was pushing him even more away from the kitchen. He stayed there for only a few months and said to himself: “Saša, leave it and find something else.” He finished in a carpentry work with a broom in his hand and was happy that he did not look at the half-drunk boss and his wife. 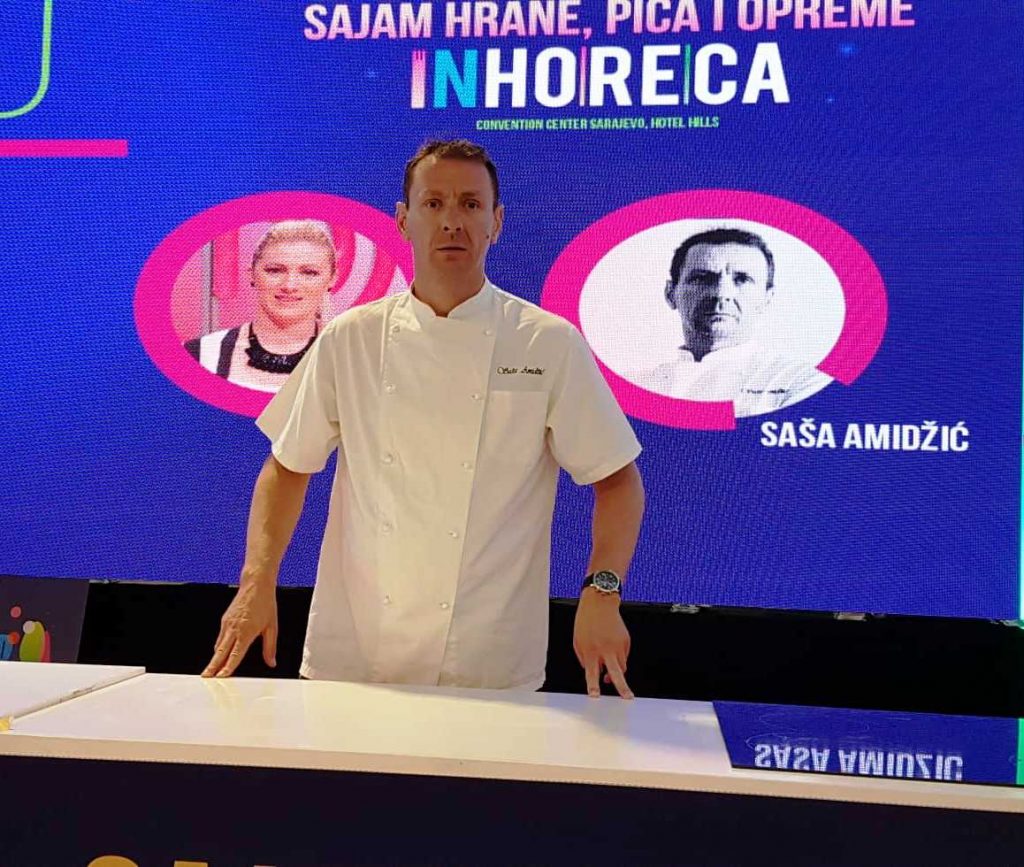 – I accepted the friend’s proposal to go to Denmark. It was at the beginning of 2000. Looking for work, I met Chef Antonio Sanchez, who, when he heard that I was a chef, asked me why I was not doing my job. He told me he would show me the other side of the medal of our business. He had patience; I learned the basic things that they should have taught me at school, but they did not, recalled this world-renowned chef.

Convinced that he was full of knowledge, he went on a much more serious job on the Danish island Romo. The first working day had already realized that, in fact, he knew nothing, and Danish person, who was otherwise a member of royal chefs and a brilliant chef, told him to clean the shrimp. He was shocked because he had not seen them before. He bought books, recorded every detail, and stole every chef’s movement and knowledge.

After three and a half years in Denmark, where he worked and studied the craft, he wanted more and better. At the cruiser, he got the position of assistant chef. Boat as big as a city, 120 cooks and more than 60 dishwashers, assistants and about 15,000 plates per day. Every detail is planned, hierarchy, as in the army. Then, he returned to Denmark, and the season on the island Vis. Then Ireland, completely unknown to him, both geographically and gastronomically. Third luck and the third time, Denmark, from where at the invitation of the acquaintance, he went to Zagreb, where he worked as the head of the chefs of the restaurant “Croatica” and mastered the cuisine of our area.

Minimalism on a plate

-Restaurant targeted a high-class guests. Famous persons came from both Croatia and the region. Here I met a French chef with the Croatian address Stephan Macchi, from whom I learned a lot. I got an offer to work on a private yacht in Monaco. The boss or the owner was brief during an interview at the Port of Portorož. He said: “Tomorrow I want to dine in Genoa at 12 o’clock, let the lunch be ready!”

He’s on a yacht preparing a lunch. The big boss arrives, politely greets, eats, and without saying a word rises, and with a slap and applause he briefly says: “That’s it!” Le Louis XV – Alain Ducasse left a special impression on Amidžić. Hôtel de Paris Monaco is a paradise for every fine chef. Perfection!

For four years, he cooked on a ship for the Swiss, who had taught him precision. Beatrice was the only boat on European rivers like Boutiqe style hotel. Again Slovenia and a kitchen with many women. He learned a lot about the Slovenian gastro scene, especially the autochthonous kitchen. Today, he is in Austria, but less and less in the kitchen. He devoted himself to consulting, food design. He plans to work with young chefs as well as expand his own knowledge.

– I am all for French cuisine, fine dining, molecular cuisine. I wanted to get out of the average and put myself in a group of specials. I am not a fan of Michelin and getting stars for my cooking, I do not need rewards but smiling guests and their positive comments. In the end, they pay me! I am a supporter of minimalism on a plate, precisely painted plates, art. I adore molecular gastronomy, to combine it with traditional dishes. I have cooked for the richest, but also the poorest. My greatest achievement was that I volunteered 370 days for those who needed it most, children without parents, without a cent of reimbursement. I was traveling over 130 miles a day and many thought I was not normal – he says.

Sites that attract attention of archaeologists from Cambridge