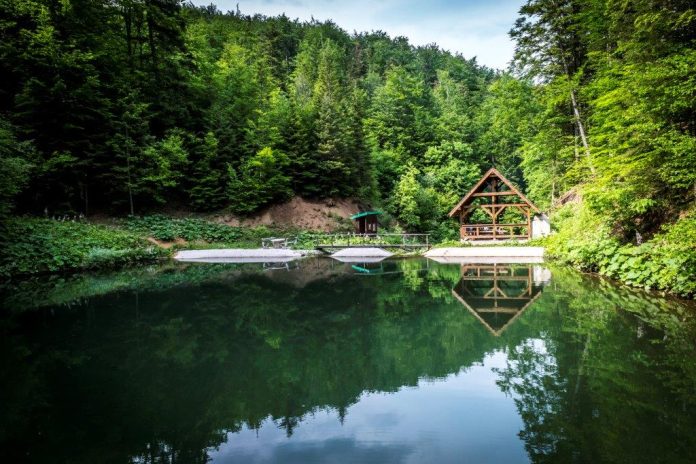 The area of ​​the municipality Zavidovići has always been rich in rivers, forests and diverse plant and animal life. Zavidovići is in the basin of three rivers – Bosna, Krivaja and Gostović, which makes it an extremely attractive tourist destination.

There are numerous destinations and activities offered by this municipality in central Bosnia, and the most prominent among them is the Tajan Natural Monument, a true resort for the eyes and soul of all those who yearn for preserved natural beauty. The favorable geographical location and accessibility of all parts of the Natural Monument provide outstanding opportunities for recreation and tourism. It has all the necessary facilities and infrastructure for an interesting and pleasant stay of guests.

The Tajan Natural Monument is located between three borders of municipalities Zavidovići, Kakanj and Zenica, and every year an increasing number of tourists visit this area and enjoy the untouched nature. Numerous mountain peaks, rivers, a lake, long underground streams, canyons and waterfalls, caves and pits, a large karst spring and archaeological sites make Tajan Natural Monument a real place to enjoy.

– This year we had a mycological association that did an inventory of mushrooms. They have registered more than 400 species of mushrooms that can be found in the protected area. Recently, we had a survey of the caves of the Tajan Natural Monument with the aim of inspecting potential winter shelters and other bat finds in Bosnia and Herzegovina. We also have contact with an ornithological society that wants to do an inventory of birds, and we hope for cooperation and would like to invite various researchers to visit in order to get to know Tajan better – they told us from the Tajan Natural Monument Info Center.

Tourists visit it to experience adrenaline sports, such as rafting and XC cross races. Hundreds of kilometers of forest roads and paths over mountain passes and next to mountain rivers offer numerous opportunities for choosing cycling routes. More than 200 kilometers were marked and recorded with a GPS device. Moreover, the mentioned trails are connected by markings to the neighboring towns, so it is possible to travel safely between Zavidovići, Kakanj, Zenica, Breza and Vareš.

– The work on the new bike path has been completed and all lovers of mountain biking will enjoy the modern built path through the forest. Following the forest path bathed in sunlight, enjoying the fresh forest air, listening to the chirping of birds and the babbling of the stream, you will reach two banks of a sparkling forest stream adorned by a pedestrian bridge from which the path begins to slowly descend. When riding a bike or walking on a trail, you have the feeling that everything is in perfect harmony. Even the benches made of wood, which are placed for rest and relaxation, are made in such a way that they fit into natural environment, so that nothing deviates from the perfect view – Belma Ramić, from the Forestry and Economic Society of the Zenica-Doboj Canton, tells us.

According to her, cyclists will also like the trail because it has a rise, a flat part and a slowly falling part, which descends towards the Kamenica restaurant. When they go down to the restaurant, visitors can enjoy the beauty of the waterfall on the Gostović River and return to the Info Center, completing their tour. The new bike path has been marked, a map with inscriptions and markings on the path has been placed.

– In addition to completed path, extra content at Tajan Natural Monument is reflected in the purchase of 20 children’s bicycles and five baskets, so that families with children can enjoy cycling – she points out.

One of the most beautiful canyons in BiH is the Mašica canyon. The depth of the canyon is 350 meters, and in some places, it is only three meters wide. When the canyon is filled with water from the rain, the Suhodol stream is formed. The canyon is rich in caves where bears find a hiding place for their winter sleep. Lake Mašica is located 12 kilometers from the Tajan Info Center. The shores of the lake are framed by dense forest, there are paths for walking around the lake, barbecues with canopies and benches have been built, which will make the stay unforgettable for all visitors. Lake Mašica can be used for rest and recreation, but also for various trainings, including diving.

Luka’s Cave is interesting, because the remains of an extinct cave bear, more than 15,000 years old, were found in it. If you wish, you can also rent equipment for a tour of the cave accompanied by experienced speleologists. You can also enjoy the Srednja Cave where you can see the halls decorated with cave jewelry.

If you like waterfalls, we are sure that you will be delighted by the two waterfalls of the river Gostović. In spring and autumn, this river is a challenge for extreme kayakers, and for rafting lovers there is Krivaja, which stretches through canyons.

Zavidovići have a rare world phenomenon, stone balls. Besides in Costa Rica and Mexico, many were found in Bosnia and Herzegovina, and the largest concentration, with more than 20 balls, was found in the village Grab, two kilometers from Zavidovići. When he was playing with his peers in the Grab neighborhood more than 40 years ago and carved his name on one of the stone balls, Nedžad Ikanović, president of the “Kamene kugle” Association, had no idea that today that ball would attract people from all over the world.

– Every child had their own ball and we never suspected that they were something special. Today I feel guilty that I did that – says Ikanović for Visit BiH Magazine.

It was only in 2006 that he realized that the stone balls were a real phenomenon, and that it was necessary to conduct research. Indeed, research has shown that this phenomenon is at least 14,000 years old.

– Then I saw that Semir Osmanagić, the founder of the “Bosnian Pyramid of the Sun” Foundation, was researching stone balls, after they found one in Maglaj. I spoke to Osmanagić, and he explained to me that it is really something special – says the president of the “Kamene kugle” Association.

He saw the potential for tourism, which was a foreign word for Zavidović, being ‘a town of wood’. In that period, there was great disbelief, but he arranged the space around the stone balls and numerous media from the region and the world, travel writers, experts, and researchers, and then tourists began to arrive at this place.

Interest in this phenomenon is not waning, so the number of tourists is increasing year by year. It was the same this year. Ikanović says that he does not know exactly how many tourists came, because there is no entrance fee, so it is difficult to keep records.

– After a two-year break due to Coronavirus pandemic, tourists from all over the world began to arrive. Most of them are from the Czech Republic, Hungary, Germany… Mostly people come here who find satisfaction in places that fill them with positive energy, who practice meditation, alternative medicine. In addition, I have exceptional cooperation with Semir Osmanagić, who brings tourists here from Visoko – says Ikanović at the end of the conversation.

Armin Jašari: Forty-three kinds of chocolate are used in preparation of cakes