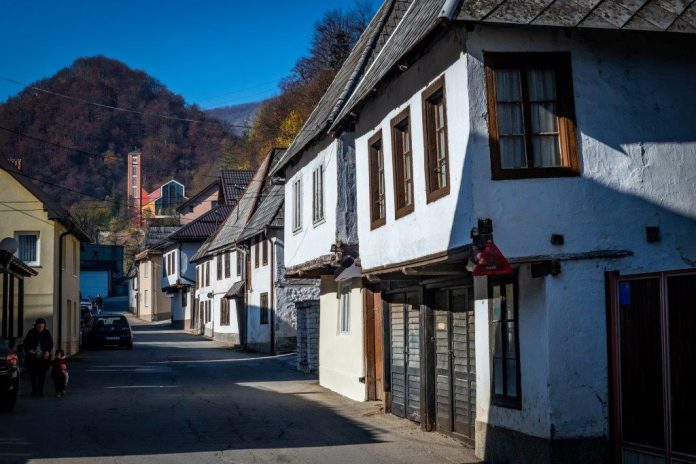 Surrounded by wooded hills and magnificent mountains, we can truly say that Kreševo ​​is enchanting. It is one of those Bosnian towns that take you back in time, and awaken curiosity, a desire for research and adventure. When you come to Kreševo, your attention will be drawn to the Bosnian houses that are several hundred years old, which form the whole of the city and are a national monument of Bosnia and Herzegovina.

The first written document about Kreševo ​​dates from the 15th century, i.e. 1434, in the document of the Bosnian king Stjepan Tomaš, which begins with the words: “In the royal town of Kreševo…”. In addition, silver was the most exploited in medieval Bosnia and the mines around Kreševo ​​were always at the disposal of the Bosnian bans and kings.

Renato Pejak, head of the Kreševo ​​Municipality, tells Visit BiH Magazine that the mines around Kreševo ​​and Fojnica were much more important to the Bosnian bans and kings than those, for example, in Srebrenik and Srebrenica, because due to their positions they were often attacked by invaders who wanted silver.

– When it comes to famous people from our city, few people know that the Franciscans laid the foundations of medicine in Bosnia and Herzegovina, and that the first doctor to graduate in our country was from Kreševo, Fra Mato Nikolić. He treated our fellow citizens in the open air, and during the time of the plague. I must also mention Dragutin Lerman from Požega. He was a participant in Stanley’s expeditions around the Congo River. In his advanced age, he came to Kreševo hoping to find a golden vein. Perhaps his greatest merit is the fact that he managed to persuade Austrian authorities in Bosnia and Herzegovina that the citizens of Kreševo do not go to the First World War – says Pejak.

-Until the arrival of Ottomans, silver was the most exploited in Kreševo, and iron too from 1863. Because of the iron processing, Kreševo ​​became one big forge in that period. According to written data, there were more than a hundred forges in Kreševo, and the Ottomans distributed Kreševo ​​products all over the country, as well as beyond – says Pejak.

Good trade relations with Dubrovnik are also known, from where oil and wine were imported to Kreševo, and metal products were exported. According to Pejak, Kreševo ​​is a real royal town because, according to written documents, Bosnian King Stjepan Tomaš and Queen Katarina dined there.

-Queen Katarina occasionally stayed in Kreševo. How much she was loved here is shown by the fact that even today the Memorial Day of Bosnian Queen Katarina is organized – says Pejak.

A synonym for Kreševo ​​is certainly the Franciscan monastery, which dates to the 15th century and is among the many protected cultural monuments in this town. Within the monastery there is also a museum that keeps a valuable collection of several thousand exhibits. In addition to the exhibit on forging, products and tools, there are also numerous specimens of ores and minerals from the Kreševo ​​area, an archaeological and numismatic, as well as an ethnographic collection.

The museum also keeps a rare edition of the book De re metallica (On metals), a book about mining, geology, and metallurgy, printed in Italy in 1657. There are more than 20,000 books in the Franciscan library. The museum also houses the memorial room of Friar Grga Martić, a Franciscan, poet, writer, cultural and political worker. He is a native of Posušje, but he spent almost his entire life and worked in Kreševo.

– When it comes to famous personalities from our city, few people know that the Franciscans laid the foundations of medicine in Bosnia and Herzegovina, and that the first graduate doctor in our country was from Kreševo, Fr. Mato Nikolić. He treated our fellow citizens in the open air, and during the time of the plague. I must also mention Dragutin Lerman from Požega. He was a participant in Stanley’s expeditions around the Congo River. In his advanced age, he came to Kreševo ​​in the hope of finding a golden vein. Perhaps his greatest merit is that he obtained from the then Austrian authorities in Bosnia and Herzegovina that the citizens of Kreševo ​​do not go to the First World War – says Pejak.

The hard-working citizens of Kreševo ​​are trying to make the best possible tourist offer, and in that way take advantage of the proximity of Sarajevo and the airport and raise it to a higher level. One of them is certainly the young entrepreneur Marija Miličević. She built the Hobbiton tourist resort, which will take you to a completely different world. She tells Visit BiH Magazine that she got the idea from photos on social networks from New Zealand.

– Considering that I have been researching interesting and creative works all my life, I wanted to make something that would stand out and be unusual in everything. My first idea was tree houses, but I made decision to create this. The implementation started in February of this year, and we currently have five facilities. The plan is to build another building and then everyone in my family will have their own house. The official opening will be at the beginning of Advent, but it is now open to visitors. All citizens are involved in this project, in terms of donations of antiques that adorn this settlement – says Marija.

Kreševo ​​is a royal, blacksmith and mining town, she points out, and that’s why she decided that every house should be connected to Kreševo ​​landmarks.

-One house is modeled according to the famous Kreševo ​​cave, the other will be in royal style because of Queen Katarina. Due to the mountain Bitovnja and the highest peak of Čador, one house will be in a mountain style, and one in a blacksmith’s style. The plan is to build a park for children, a magical forest for walking. Each house will have a jacuzzi and will be made in a natural environment – he says at the end.

At the end of October this year, Kreševo ​​got its first four-star hotel. Hotel Adriale has 17 rooms and two apartments, i.e. 40 beds.

-A spa center, i.e. a sauna and a hydromassage tub, is also available. In cooperation with external collaborators, we also offer cosmetic treatments, massages, and fitness center services. Together with the local community, we also organize tourist tours for guests, tours of Kreševo ​​and sights. There is also a restaurant where you can enjoy specialties that are a combination of modern and traditional cuisine – Jelena Čalaga-Tolo, manager of hotel operations tells us.

The story of Kreševo ​​would not be complete without Kreševo ​​blacksmiths. One of the guardians of the Kreševo ​​tradition is Dalibor Biletić, the owner of the Kraljević forge, which has been operating since 1984 and produces all kinds of agricultural tools and other custom items.

– Kreševo blacksmiths are hardworking, diligent, and eager to learn. We market our products throughout Bosnia and Herzegovina, as well as abroad. We are currently preparing a shipment of SAČ[1] for Australia – Dalibor tells us.

While showing us the process of producing one item, he says that in one working day he can produce about 150 axes of top quality.

Kreševo ​​has great prospects for development of religious tourism. The village of Deževice is known for the cave of St. Jakov Markijski, the Italian Franciscan who lived and preached there. Today, it is a shrine that is visited annually by more than 30,000 pilgrims.

If you come to Kreševo, you will also see Hajji Hasanaga’s Mosque. Naid Kršić, imam of this mosque, tells us that there are two dates on the construction of the mosque. The first information from the library of the Franciscan monastery says that it was built in 1604, and the one from Gazi Husrev-bey’s library in Sarajevo that it was built in 1585.

– The appearance of the mosque has not been changed since its creation. The walls were made of stone, and the minaret and roof were wooden. Until the war in 1993 when it was set on fire and demolished. It was renovated in 2004 – says Kršić.

When we were coming to Kreševo, they told us that we had to visit Vranke, perhaps the most beautiful village in Bosnia and Herzegovina. And what makes it specific? It contains Bosnian houses that are several hundred years old, and seven of them have been declared national monuments in Bosnia and Herzegovina. And that’s not all. The Jasenovac River flows through the village, over which a Roman bridge stretches. In Vranci, there are also the remains of a 200-meter-long Roman road.

What sets this village apart from others in BiH are the ecologically aware locals, of which there are very few today. Until about 40 years ago, there was a custom of washing the river. On Saturdays, after finishing all the work, the locals scrubbed the stones and the riverbed with brushes and thus kept it clean.

Among the old ones, there are ta’te, as the locals call the bell tower, the only one of its kind in our country, in which there is no bell, but a sound similar to ringing is obtained by striking two metal hammers made of solid iron against two metal plates, ta’hte.

Once you visit all that Kreševo ​​has to offer, you need to rest and recharge your batteries. The best way to do that is at the Ribnjak restaurant. It is located at the very source of the Dragušnica River and it is the right choice for everyone looking for relaxation and rest. We recommend you to eat fresh trout from their own pond, which is located next to the restaurant.

Kreševo is the headquarters of the BiH Motorcycling Association and, according to motorcycling enthusiasts, they have the best and most well-kept motorcycle track in the locality of Gajice, where races are held. Moreover, on the mountains surrounding Kreševo, there are marked tracks where enduro races are held several times a year.

– For the last five or six years, the enduro city center night race has been held, which gathers competitors from all over Europe. This is a great event that attracts several thousand visitors. In addition, Crash fest has been initiaated this year, a music festival that brought together the region’s leading musicians and the audience in two days and presented young groups. It gathered thousands of visitors, and we will try to make it a tradition – Toni Lalić, an employee in the Municipality of Kreševo tells us.

Delila Softić, a successful doctor and a model: This passing year...