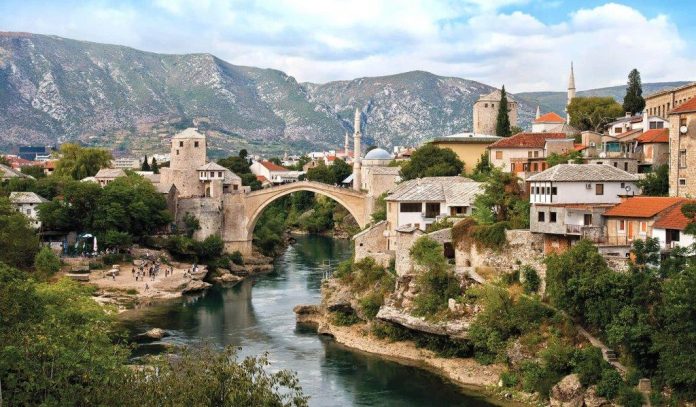 Indian summer in Mostar has extended the summer season and despite the autumn in the calendar, Mostar’s jumpers from the Old Bridge are jumping almost as in the peak of the tourist season, and the old town is flooded with tourists from all over the world.

Tourists enjoyed the beauty of the city on the Neretva River, sipping coffee on the terraces of sun-lit restaurants, taking photos along the famous Old Bridge, but also watching the adrenaline-filled traditional jump from the UNESCO protected monument.

Deputy Director of the Herzegovina-Neretva Canton Tourist Board Semir Temim confirmed that the postseason was above expectations. According to him, it is enough to see the tourists and the atmosphere that prevails in the old city center of Mostar to understand that the nice weather in late October brought benefits for the tourist season.

He points out that for now it is ungrateful to talk about the number of tourists who have come and who will come in the postseason, but statistics show that the summer season is better than the previous one.

– During this season, according to our estimation and statistics of the Tourist Board of Herzegovina-Neretva Canton, the number of guests increased by 12 percent compared to last season and the number of overnights by 15 percent. Visiting fairs for the preparation of the tourist season, we have seen that there is a huge interest in BiH, that tourists want to come to our area. Not only do they pass, but they also reside in our country. Tourists are staying in Mostar and Herzegovina because we have made a great offer with a lot of amenities. Still, there is never enough content, Temim said, adding that the number is always far greater than what is available.

In Mostar, it becomes a year-by-year practice to keep the season better than the previous one, and with that, new records are reached.

-There was no continent from which we had no tourists. Most tourists come from the Gulf countries and the Far East. There are a large number of guests from Turkey. Traditionally, our guests are from Europe: Polish, Hungarians, Italians, and I am particularly pleased that they are returning – emphasized Temim.

Despite the uncertain data on the number of guests visiting Herzegovina-Neretva Canton, we are witnessing that the city on the Neretva River is by far the most interesting tourist destination in this Canton, but no doubt in the wider region.

Old town Dubrovnik near Ilijaš: Proof of cooperation between Kulin ban and...

Pannonian Lakes revived the city that lies on a grain of...