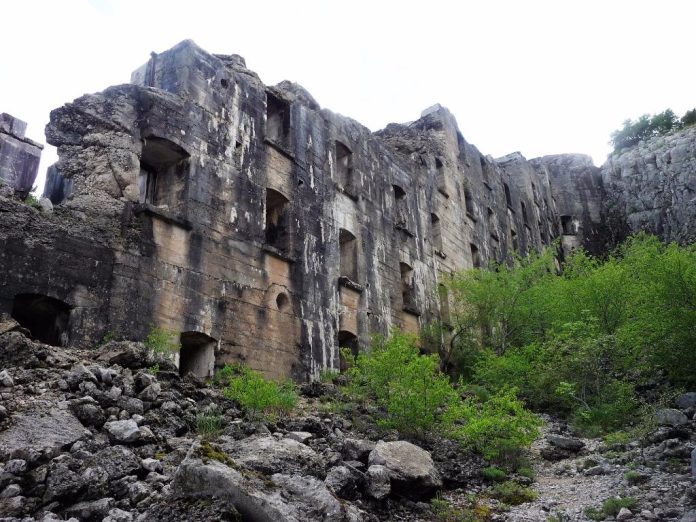 Merely a few years after Bosnia and Herzegovina has been occupied in 1878 the Austro-Hungarian Empire started an ambitious construction programme to build an extensive fortification system. This region, including the southern part of Dalmatia, was characterized by increasing tensions between the different ethnic groups and traditional resistance against occupying state powers which ultimately lead to the outbreak of the First World War.

The omnipresence of state power was demonstrated by many military buildings – both in the urban context and the outermost periphery. In addition to the strategic positioning of the fortifications, their “visibility” is a deliberately placed calculation and the region became a “fortified area“. In the first period of occupation, following the Congress of Berlin in 1878, only some fortifications, already existing, from the Ottoman period were used.

The fortification topic to secure Bosnia and Herzegovina and Dalmatia soon became urgent and needed to be reconsidered at the end of 1881, as rebellion broke out, affecting the eastern part of Herzegovina and southern Dalmatia. In addition to development of different fortification elements for so-called occupied territory (Okkupationsgebiet) – that is Bosnia, Herzegovina, Sandzak and parts of southern Dalmatia – the approval of a considerable budget for building fortifications came from the Ministry of War in Vienna and authorization of the Emperor Franz Josef I himself, as well.

The year 1882 marked the official beginning of a radical construction programme, which lasted for almost four decades. Eventually, Bosnia, Herzegovina and southern Dalmatia were transformed into a fortified area comparable with the former Austrian Quadrilatero in northern Italy.

Practically, nothing had been changed in the fortifications around Trebinje since the end of the 1880s when the former Ottoman Turkish fortress was repaired and improved. However, from 1908 onwards, the modernization projects of the fortress became more concrete, forced by the Annexation crisis. This was in accordance with the policies of third period of Construction Programme, beginning in 1904; its first suggestions stated the need for transformation of the fortification system in this region.

This became urgent, as the nearby princedom of Montenegro came in possession of heavy siege armament in 1903. Both, the general inspector of Fortification Engineers baron Leithner and later the army inspector for Bosnia, Herzegovina and Dalmatia General Potiorek made proposals for fortification system to secure the southern part of the Habsburg Monarchy.

The frame should have been formed by a network of comprehensive armoured forts (Werk). The design of the projected new forts was almost identical to those built along the Italian frontier since 1907. At the beginning of the First World War only two forts – Dvrsnik in Krivošije and Strač in Trebinje – have been in an advanced phase of the construction progress, but have not been finished till 1918.

Fortress Strač was being built by Austro-Hungarian army from 1910 to 1916 with the aim of protecting the south-eastern border of Bosnia and Herzegovina. It was the second-largest Austro-Hungarian military fortress in the Monarchy. It hosted Austro-Hungarian troops until 1918. This fortification facility was armed with two 100 mm howitzers, two smaller cannons, 24 machine guns and 120 cm searchlight. Four steel domes are placed at the top of the building – half masonry and half almost engraved in stone. The domes were pulled up with a “Austro-Daimler” artillery tractor. Soldiers had diesel generators for electricity.

Despite delays of construction works caused by the Balkan crisis of 1912-1913, plan was to complete the “Werk” by the end of 1915. At the outbreak of the war the fort was far from being finished. All resourced were given for finishing of the battery block together with observation posts and ammunition magazines as well as for parts of the barracks.

After these parts of the fort were finished the construction continued at least until summer 1915, when the power plant was activated and some armament was improved. A traditional battery was improvised on the right side from the 60 mm M10 casemate cannons that have already been delivered. Construction of Strač was never completed, as Montenegro capitulated in 1916. The fort was built with modern concrete construction. Fallen Austro-Hungarian soldiers were buried outside the fortress, which can still be seen today. There are official data that there were five officers and 157 soldiers on Strač in the last Austrian military crew.

Post WWI fort Strač was obviously occupied by the military until the end of the World War II. Once the military had withdrawn, all furniture and most of the steel parts were removed. The howitzer battery and the barracks suffered the most devastation. Today, most of the Strač is ruined, but one part is still preserved. This place has enormous tourist potential. Despite this damage fort Strač is an attractive destination and the last Austro-Hungarian fortification where the M9 howitzer cupolas are still preserved.