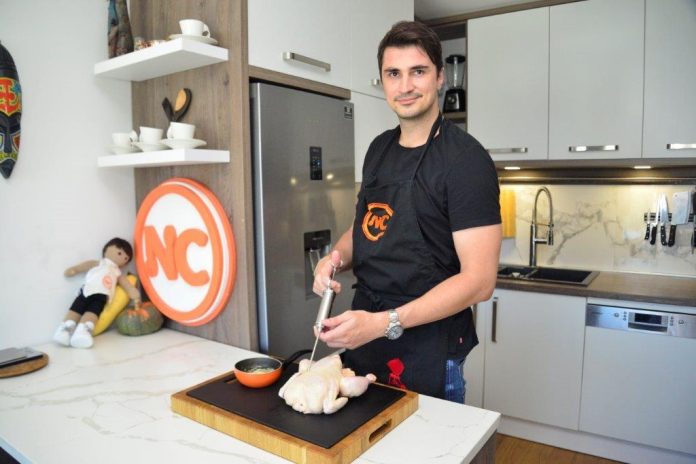 Okay, today we are making… These are the words with which Neno Svjetlanović, known on social networks as NenoCooks, starts each of his new videos. Neno is not just another usual cook who tells you what ingredients you need, prepares a dish, and ends his story there. Neno is specific and completely different from other content creators because his content on social networks is full of humor that delights his followers. Everything, Neno says for Visit BiH magazine, was completely not planned.

-At the beginning, I tried to copy famous chefs and narration was identical. I made the first content in English. I turned the story around, made a video in Bosnian and waited for reactions. I thought that if it didn’t go well with the audience, I’d give up on everything. Nevertheless, people accepted it with enthusiasm – he tells us.

The first content in Bosnian language was the preparation of flatbread and, as he says, it turned out great. He immediately started making another video.

– I was preparing chips and I wanted to show how stupid and boring it is to make chips at home. It turned out to be one of the most viewed videos. When I saw that people liked that approach, I wanted to make a specific dish. I started with index and mason’s sandwiches, from scratch. It was clear that my concept worked – he says.

How did Neno decide to venture into culinary waters, since his main occupation (IT expert) has no contact with the kitchen, except when he is hungry?

– I have always been a gourmet, I love food. As a student, I cooked a little, but I ate out more often, in restaurants, fast foods… During my studies in Sarajevo, there was a much smaller selection of food than today, so I had to cook some meals myself. Back then, there weren’t many chefs on social media. We watched Jamie Oliver, Gordon Ramsay, who was pushing the shepherd’s pie at the time. It provoked me and I started to prepare it. It turned out great. I started changing the recipes and it became more interesting – Neno says.

When asked what the first serious dish was he prepared, Neno said it was Hungarian goulash soup.

– I was in Hungary and I tried that dish there. I was so excited that I had to prepare it at home. After that, I started buying dishes and utensils and set off. I decided to create content on social networks in 2017 or 2018. Back then there were a lot of creators I followed. One chef in particular stood out, who created dishes from movies, so that pushed me to have my own channel on social networks – he says.

He focused on Balkan food, because he wanted to promote it beyond the borders of the Balkans.

– Balkan food is excellent. Moreover, I wanted to adapt the preparation of food for the people, economically, so that everyone can afford all the ingredients. People often write to me that a certain ingredient does not go into a specific dish, but a different one, but I am not interested in that. I want preparation to be as affordable as possible – he points out.

Neno says that he does the complete preparation, from the script to the publication on social networks. A friend made his logo, and another introduced him to editing and filming.

– I need two days for one 90-second video. One day filming, the other editing. Rarely I can finish everything in one day. When I have a more serious project, it takes longer. I used to go to Croatia and come back because of a few footages. Then, I need more time – he points out.

When asked about his favorite chef and role model, Neno says that it is Kenji Lopez Alt.

– This is the chef who has done so much for the food industry and culinary arts in the last 50 years. He also wrote the best book about food, “Food Lab”, where he dispelled numerous myths. Most cooks do many common things in the kitchen without even knowing why they do them. Here is an example. In our country, when pies are prepared, oil is added to the dough. Scientifically, oil is an inhibitor of gluten, which makes it difficult for noodles to develop. However, we have perfected that segment so much that it is not a problem for us, even though there is no logic at the molecular level. He explained exactly such things in the book – says Neno.

According to him, he learns and explores culinary secrets every day. Especially when he wants to release a new video. And is everything going according to plan are there any problems?

– The only dish in which I made a mistake was kljukuša. When you order kljukuša in Sarajevo, you get a dish that differs from kljukuša in Bosnian Krajina. When I started preparing for kljukuša, I saw that even in Krajina they could not agree on what kljukuša is and that their recipe differs from city to city – he emphasizes.

When asked how high-quality Bosnian, and even Balkan food is compared to world food, Neno says that there are both good and bad things.

– Our food is healthy and contains a lot of meat. That’s not a problem. The bigger problem is that we eat a lot of bread with a dish. There is also a lot of fat, but the goal is to make it tasty, so we are at the very top of the world in terms of taste. In my opinion, the Balkans together with Italy have the best food in the world – emphasizes Neno.

When asked what his favorite dish is, he says it’s burek, but he doesn’t make it often.

– I don’t think there’s any point in doing that, because I can never prepare it like the craftsmen in Bosnia and Herzegovina do. I am in such a country that it makes no sense to waste time on food that can be obtained relatively cheaply and of exceptional quality. I made the pie, like the flatbread, only for the video and never again. If I lived abroad, I would make it, but it really doesn’t make sense here – he says.

In his posts on social networks, every dish contains meat. We asked him if he plans to prepare any vegan and vegetarian dishes.

– I always tell a joke about those dishes and I don’t see the food I prepare as healthy. I will prepare a vegan bolognese, but not for health and some awareness, but purely for economy. I managed to find an alternative for meat that costs two marks, and no one would be able to recognize the difference in taste. Only the texture is different – he emphasizes.

He will surprise his followers with some novelties in the coming period.

– I will bring some of our famous music bands as guests and cook with them, and I want to go out on the field. I was at the fair in Puračić and I saw that it was very interesting to people. They left comments that they wanted to come and visit the fair. I plan to visit some other places in BiH that even our people don’t know about, let alone tourists. I want people to come and visit Bosnia and Herzegovina because of my work on social networks – he says at the end of the conversation.

Neno has a suggestion for the New Year’s table.

– The cover of Alija Lakišić’s book “Bosnian Cook” immediately comes to mind, there are meals such as dolma, a couple of pies, bey soup. I would also add a large row of dry meat and Livno cheese – he says with a laugh.