A future student of pedagogy, Sarajevan Amina Hasanbegović is the new Miss Tourism of Bosnia and Herzegovina and she will represent BiH from 19 September to 10 October at the World Competition in China. This decision was made by Bogdana Trifković, a licensee and formerly Miss Earth BiH.

Amina is a well-known face for fashion lovers in Bosnia and Herzegovina, and has already had some notable appearances in several beauty pageants before becoming Miss Tourism. Last year, she won the title of the first runner-up at the Miss Earth BiH pageant.

In February, at the Miss Balkans competition held in Banja Luka, in the strong competition of beauties from Bulgaria, Serbia, Montenegro, Croatia, Slovenia and Bosnia and Herzegovina, she won the ribbon of the second runner-up.

Although she has a busy schedule, both for her preparation for China and for filming videos, she found time to make a series of photos for Visit B&H magazine. Her beauty is in harmony with the natural beauties of Bosnia and Herzegovina, at the spring of the River Bosna and Roman Bridge.

– I’m glad I took the title and that I am going to one of the world’s biggest beauty pageants. I’m very happy – says Amina Hasanbegović.

She is aware of the power of the media and how much they mean to a young person who, like her, is stepping into the world of show business.

– People recognize me on the street already. Although I am quite young, I have done a lot in the modeling world in a short time – says Miss Tourism, who after completing her education from the secondary school, enrolled in pedagogy at the Faculty of Political Science in Sarajevo.

Amina Hasanbegović has already campaigned for Sarajevski kiseljak and is a spokesmodel of LC Waikiki BiH. 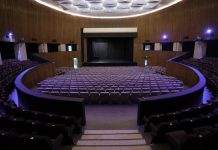 Can we meet expectations of tourists?