The monument of nature Vrelo Bosne, spreading on an area of ​​603 hectares, is located at the foot of Mount Igman, in the settlement Ilidža, about 15 kilometers from the center of Sarajevo. According to the old records of London 19th-century newspapers, the Hot Spring area is described as the nicest place in the world, with the air that heals, the enchanting climate, a landscape that could give the poetic mood and the resting greenery.

This monument can be reached by car from the Sarajevo-Mostar highway where the road separates to Vrelo Bosne near the Old Orthodox Church. For visitors coming from this direction, there is a parking plateu.

The most pleasant way to get to the Spring of Bosnia is through the Great Alley, a beautiful promenade over 3.5 kilometers long, edged with about 3,000 trees of chestnut and plane trees which are over a hundred years old.

If, however, you decide to get another way to reach the Springs of Bosnia, you have at your disposal fiacres (carriages) which have been driving this route since 1895 and you can rent bicycles and ride through a beautiful natural environment. The fact that more than 100,000 people visit this place every year speaks in favor of how popular this beautiful oasis is.

Vrelo Bosne has beautifully decorated promenades that allow access to the lakes where the swans swim, the most recognizable symbols of the spring. The entrance to the area costs two BAM per person.

The spring of the river Bosnia, the beautiful lakes that hold swans, the islets covered with lush greenery, and the fact that in the hot summer months the temperature is somewhat lower than in the city of Sarajevo, are some of the reason that Vrelo Bosne has been for over a hundred years a favorite picnic area of ​​Sarajevans. It is assumed that only the name Bosna comes from the word “bosana”, an ancient Indo-European word, which mean – water.

This area is a habitat of various plant and animal species, some of which are endemic. Small Bosnia, a watercourse in which six springs flow, is the habitat of a native species of trout.

The excursion is fenced and decorated – benches are placed, resting areas covered, there are children’s playground, and in the central part of the complex, there is a restaurant where you can have coffee and eat one of the many specialties of Bosnian cuisine.

Downstream of Vrelo Bosne there is a bridge at Plandište, which is known as the Roman Bridge, a national monument of Bosnia and Herzegovina. It was built in the Ottoman era, and it owes its popular name to the fact that parts of ancient Roman buildings are built in it. 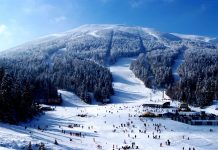 The Old Town of Srebrenik: Home of Bosnian Bans and Kings

One of the largest nature reserves in BiH: Magical Landscapes of Blidinje...

The best ski resorts in Bosnia and Herzegovina