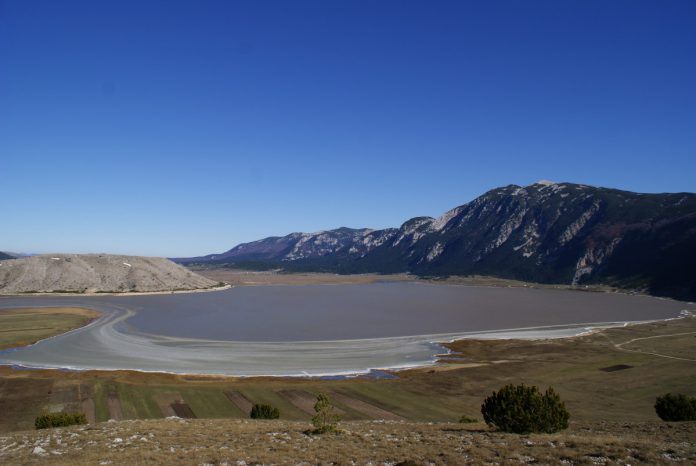 Holding in the embrace the vast areas of the timeless beauty of the well-known mountains of Čvrsnica, Čabulja and Vran, makes the Nature Park Blidinje one of the most famous natural reserves of Bosnia and Herzegovina. Its center is dominated by Dugo polje, like the pristine prairie, and the southeastern part of Blidinje Lake Park by the largest glacier lake in BiH.

No visitors to Blidinje were noticed who were not intensly impressed by unique scenes of the plain Dugo polje and surrounding mountain peaks, along with the crystal clear waters of Blidinje Lake. The area is an untouched nature that offers all – forest landscapes, pastures, lake, more than a dozen water sources, as well as countless mountain plants that many come to pick, trusting their undeniable healing power.

Besides the unique natural seal, Blidinje is characterized by rich archeological sites. Several necropolises with 171 medieval tombstones – stećak, attract the greatest attention and the largest and most preserved of them all is in Dugo polje, which has about tombstones.

Precisely because of these numerous specifics, Blidinje Nature Park is included in the UNESCO’s Tentative List, and is expected to enter into the phase of making a Nomination File and other documents in order to be included on the UNESCO World Heritage List in the forthcoming period.

The area of ​​Blidinje, Kutle emphasizes, is located in the central part of BiH and is bordered from the north, east and south by the three deepest canyons in Europe, of which the Drežanka Canyon represents a unique profile. The glacier Lake Blidinje positioned at 1,184 meters above the sea level dominates the landscape. In the northeastern part of the field is the Brčanska River, which springs and disappears there.

– The Blidinje Park extends over 350 square kilometers as a protected area of ​​the Nature Park, in accordance with the regulations of the IUCN Regional Office for Eastern Europe and Central Asia, which works to preserve the species and build a functional system of protected areas. Blidinje is an interesting place for protection, and the data that in 1890 the Austrian geodetic Philip Balif mapped Blidinje, and in 1936 the Croatian mountaineering association “Bjelašnica” top “Vilinac” on Čvrsnica for skiing exit – said Kutle.

Blidinje pearl is known for another phenomenon – it is the largest complex of pine (Heldreich’s pine) in Europe, Scots pine that is endemic to the central and western Balkans and the southern part of the Apennine Peninsula. Not only that there are four types of pine trees growing on its territory, which Blidinje places among the unique zones in Europe. These are, besides Heldreich’s pine (Bosnian pine), Black Pine, Ordinary or White Pine, and Mountain Pine.

In addition to Blidinje Lake, this Nature Park also has other lakes – Čvrščničko, Ledeno, Jezerine and Crepulja. Kutle emphasizes that the Blidinje area gives as much as 40 percent water to Neretva, Radobolja, Drežanka, Lištica and Trebižat. It is known as “air spa” and antiallergic space, and it represents a true magnet for all who can heal health problems by simply visiting Blidinje.

Kutle emphasizes that the Park can boast of three segments that are protected as geomorphological monuments of nature – Lake Blidinje, Hajdučka vrata on Čvrsnica and Mijatova pećina on Vran planina.

– Hajdučka vrata at the top of Čvrsnica nature made it in the form of stone doors behind which is a chasm and steep slope, and they were named after hajduk (bandits or freedom fighters depending on time, place and enemies). For all mountaineers this is a Makka for taking photos, especially to foreign visitors. Moreover, there is the Mijatova pećina (Mijat’s Cave) on Vran, a place where Mijat Tomić, hajduk, known for his work on the Blidinje area, lived and  hid – Kutle emphasized.

Talking about tourists, Kutle points out that about 100,000 guests visits Blidinje annually, and the massive arrival is recorded from Friday to Sunday. Most visitors are from BiH, followed by Croatia, Germany, France, Italy, Turkey and Dubai.

– Tourists are mostly impressed by Čvrsnica and Vran, Dugo polje and Blidinje Lake, as well as domestic food and climate. Moreover, the cordiality of the locals, medicinal plants, and drinking water from 15 springs in the park – he emphasized.

Visitors to Blidinja, besides enjoying the beauty of untouched nature, can also have fun with some of the numerous contents that the Park offers, such as cycling, skiing, riding, racing, renting quads and various organic food.

A plan for this year is to open an administrative building with accommodation capacity, a restaurant and seminar hall, as well as bringing technical water to the ski resort facilities and enabling the snowing of the tracks. Kutle hopes that, with the planned changes, the Nature Park Blidinje will be the carrier of tourism in the region in the coming years.

Salt Museum in Tuzla: From the Neolithic to the present day