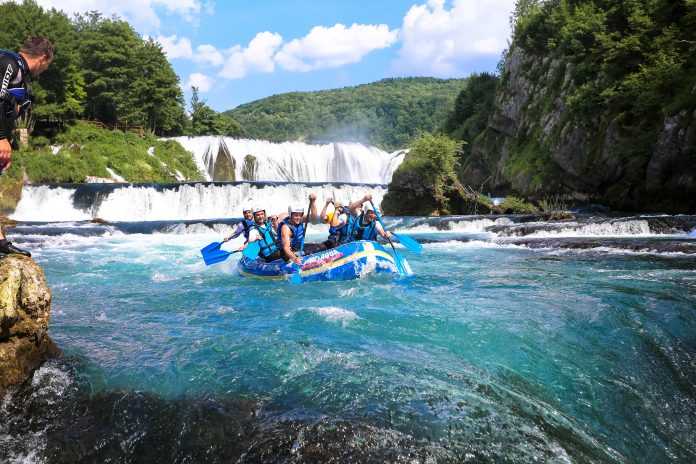 Vrbas, Rakitnica, Drina, Una, Tara, Neretva, Krivaja and Trebižat are recognized in the world as the most interesting and most attractive rivers for rafting, and fusion of wild and beautiful nature, adrenaline, challenges, traditional cousin, family like hospitality guarantee an unforgettable time.

The tourist offer in Bosnia and Herzegovina develops from year to year, and quality of service is constantly improving. Today we can say that rafting in Bosnia and Herzegovina is of a world class. Sports rafting is present on the Vrbas River. Every year there is a competition, and in 2009, Vrbas hosted the World Cup in this sport. Neretva belongs to the group of mild rivers for rafting, while Tara and Una are extreme.

Rafting on the Neretva River

Mountain River Neretva, which in one part, in the canyon upstream from Konjic, provides a unique experience to adrenalin-filled rafters and irresistibly reminds of its fish – endemic trout Salmo obtusirostris.

Rafting track length on the Neretva from Glavatičevo to Konjic is about 23 kilometers and it holds beautiful canyon and waterfalls. In the lower course of the Neretva River, where rafting ends, in the village Džajići, there is a beach, which is crowded during the season.

Rafting on the Una River has become an unavoidable event, and the proof for that are many business groups as well as families who come to this river again and again. The upper part of Una is drinkable, and was declared a national park which is a proof of excellence and purity of the river and the main reason why Una is considered a true oasis of true lovers of nature and natural beauty. Rafting usually begins from Kulen Vakuf, settlement on the artificial river island, below the prehistoric fort Ostrovica, then over Ripač, Bihać to Bosanska Krupa.

Una Regatta is an international tourist-sports and cultural event. Regatta is the central event of tourist potential of the river and the natural environment promotion. The race takes place in three stages, and lasts for four days. In addition to rafting, this event is also adorned by other activities, such as jumping from the Town bridge in Bihać and Bosanska Krupa …

On its way from Komovo, 145 kilometers long, Tara has created a canyon nearly a hundred kilometers long, with many adrenalin rapids, and most notable ones are Brštanovački, Borovi, Ćelije, Crvene Stijene …

The Tara canyon is the second deepest in the world, after the Colorado Grand Canyon. The crystal clear water you can drink all the way is the habitat for many plant and animal species, many of which are endemic. In addition to rafting there is a number of possibilities in the environment for organization of various excursion tours through the National Park Sutjeska, Perućica rainforest, mountain Zelengora, sand pyramids, and many other natural beauties.

River Rakitnica is one of the largest tributaries of the Neretva River. It formed 26 kilometers long, rugged and beautiful canyon that stretches between Bjelašnica and Visočica, southeast of Sarajevo. Rakitnica Canyon is one of the deepest canyons in Europe, and along the canyon there are numerous endemic species of flora and fauna.

Bears, wolves, wild boars, martens, wild goats all take refuge in the inaccessible canyon. Through entire length of the canyon, crystal clear mountain water can be drunk. Entrance to this “place of wilderness and untouched nature” is located 30 kilometers from the center of Sarajevo, and 20 kilometers from the airport. Entrance area of the Canyon offers attractive visits to the riverbed and to side of canyon that are characterized by spectacular views of the canyon and its tributaries, which flow into this river of crystal pure water in cascade waterfalls.

Fans of extreme sports can enjoy this beauty on five, 11, 14, and 21 kilometers long paths. Vrbas is a fast mountain river with several sparkling and wild sections and fast drops, and is one of the few most attractive rivers with severity rate 3-4.

Vrbas cuts two canyons – Tijesno and Podmilačje. International Classification of severity is level 3-4, and on some routes 1-2, which gives opportunity for wild adventure and adrenaline rush, and quiet family time in all the activities as well.

Trebižat in the heart of Herzegovina

Trebižat River is located in the very heart of Herzegovina in the municipality of Ljubuški and extends from its source in Posušje to the mouth of the river in Struge, and it is 50 kilometers long. Due to its abundance of water, biodiversity, unique travertine barriers Trebižat River offers great opportunities to rafters and those who love the river and nature. It is also important to mention that the river Trebižat is drinkable all the way and that the water temperature in the winter rarely falls below ten degrees.

True lovers of this form of recreation and sport use the section Peć Mlini – Waterfall Kravice that is 25 kilometers long and it is much more difficult due to a large water level so that the descent turns into an extreme sport. For people in good shape sections from the village Veljaci to the beach Čeveljuša a distance of 11 kilometers is recommended, while for those of modest knowledge and forms six kilometers long section Otunje – Čeveljuša.