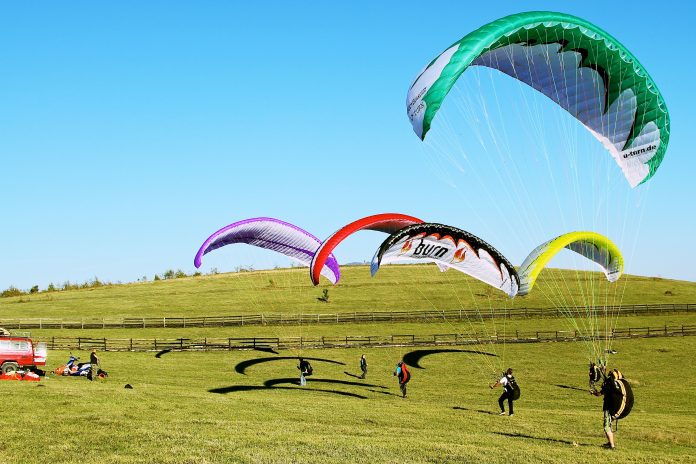 Parachute sailing (paragliding) is one of the youngest, the easiest and the simplest ways to turn the dream of flying into reality, and in recent years, it is becoming increasingly popular in Bosnia and Herzegovina.

Our country is ideal for this extreme sport, and the fact that there are about 30 clubs, which have a growing number of members, in Bosnia and Herzegovina. However, paragliding brings great risks. To take off without proper theoretical preparation and practical training, under control of instructors, represents a danger.

Due to the low flight speed, every change of wind speed and turbulence may jeopardize safety. Therefore, long-term and systematic training is the only way to experience and long enjoy paragliding.

Mirvad Zenuni, President of the Paragliding Club “Extreme” from Sarajevo, emphasizes that BH areas have perfect climate for this sport, because of the numerous mountains and beautiful sceneries.

– Paragliding is present all over the world and our country has a great potential to make good money of this sport. We are lucky to have Bjelašnica, Igman, Jahorina, Trebević … Wherever you look, you have mountains ideal for take-off. The attention of people across the globe we attracted by organization of the Paragliding World Cup in August 2013. It was a great promotion of our country in this sport – says Zenuni.

Bosnia and Herzegovina could earn a lot of paragliding if we organize important international competitions every year. Zenuni has so far enjoyed the overflights from Jahorina to Kakanj, from Mrkovići to Zenica, from Vareš to Modrac …

– Besides Sarajevo, it is possible to nicely fly in Mostar, Kupres, Mrkonjić Grad, Cazin … Every flight is unique and the story of its own, and each ascent is special. Bjelašnica is a fantastic for flying, because there is a lot to see, south and north side of Trebević as well. I’ll never forget the first paraglider flight. That was in 2003. It is an amazing feeling when you are sepparated from the ground. At first, you feel a little scared, and that is quickly replaced by excitement. Annually, depending on the season, I have 70 to 100 hours of flying. Each flight over Trebević astounds me; I do not know whether the view of the mountain or Sarajevo is more beautiful. This feeling cannot be experienced in any other vessel, but for self-management of this aircraft takes a lot of time and hours of training. It’s like a baby learning to walk. Later, you observe that in time, it becomes more stable and more secure – says Zenuni and adds that tandem jumping, or flying in pairs is also very popular.

Zenuni flew paraglider in many world countries, and his unfulfilled desire is Colombia.

– Colombia is the dream of every lover of extreme sports. So far, I have been to Brazil twice, in February next year I’m packing suitcases for Colombia – says Mirvad whose longest route, was from Igman to Livno, which is also the national record.

Recognizable brand of Bosanska Krajina: Banja Luka – the center of...