From the humble manufacturer of medicines, which began its activity in 1951, the biggest BH pharmaceutical company Bosnalijek today is not only a pride of Bosnia and Herzegovina, but also a recognizable brand in countries around the world. From year to year, Bosnalijek is lining up obly success and positive results, and the company’s CEO, Nedim Uzunović, speaks of the business in the past year, as well as plans for the next period in the interview for the Visit B&H magazine.

How has Bosnalijek been doing business in the past year?

– I can proudly say that last year was extremely successful for Bosnalijek, despite the numerous challenges we have encountered in more than 20 markets in which we operate. In 2018, we achieved a significant revenue and profit growth, which continued the positive trend of the past few years. Revenues rose by ten percent. All other financial indicators, such as EBITDA, which amounted to 25.5 million convertible marks, which is by 10% higher compared to the previous year, and profit before tax of 15 million, which is an increase of 14% compared to the profit before taxation, realized in the previous year. What is as important to us as the business result is that we have implemented significant investment activities in accordance with planned dynamics and completed the works on new laboratories for quality control, as well as completed a significant part of the investment in expanding production capacities.

– As in the past few years, the bulk of sales revenue, as much as 76 percent, has been realized in foreign markets. The market of the Russian Federation is still our largest and most profitable export market, where we exported goods in the total value of 49 million euros, which makes 79 percent of the total value of our products. In particular, I have to point out that in the past year in Russia, for our biggest and most famous brand LYSOBACT we received a prestigious recognition and LYSOBACT was declared the product of the year in the category of drugs for the treatment of sore throats as a first choice medication. In addition to the markets of the Russian Federation, the markets of Kosovo, Libya, Serbia and Ukraine are among the top five countries importing our products. We are committed to strengthening the infrastructure, registering new molecules from our rich portfolio, and better positioning products in other markets where we are present, as well as opening new markets.

How much is Bosnalijek’s market share in the domestic market?

– According to the data for 2018, the amount of 594.1 million has been placed in the local market, or 87 million packages. The share of our company according to the number of packaged drugs is 14.01 percent. When we see these data, it is quite clear that we have a lot of room for additional growth in the domestic market, and I have to point out that, unfortunately, foreign markets recognized our quality far more than the local market.

Are you satisfied with the results achieved?

-We are so pleased that the achieved results represent a strong precondition for new investments and new jobs, and at the same time they contribute to strengthening of the domestic economy. We are very proud of our continued growth, development and operational excellence in all business segments, as well as the successes we achieve on the global market, because for many years we have seen a high export growth. 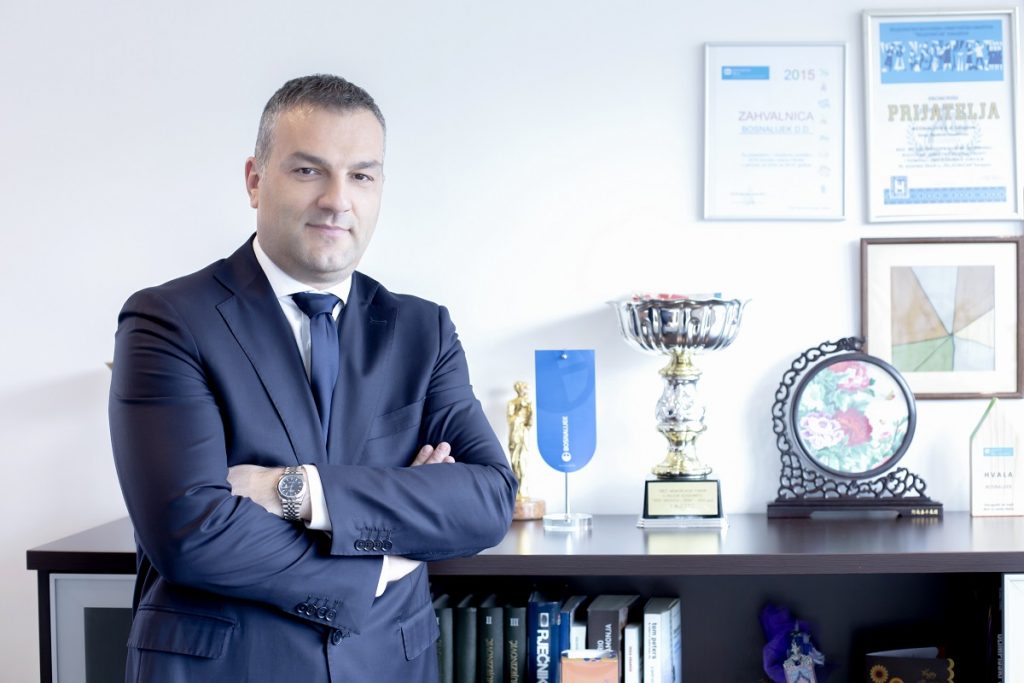 Has Bosnalijek had investments in the past year and what kind of investments are being made?

-The past year was marked by significant investments in expanding production capacities, as well as the completion of works at new quality control laboratories, which are key preconditions for growth and development of Bosnalijek in the future. In addition, we continuously deduce significant amounts to investment in research and development, which moves us away from the generic manufacturer, as well as the registration of new drugs, which is definitely the standard in the industry in which we operate.

Are you planning any additional investments this year? What kind of investments are those?

-The majority of our investment projects is long-term. In 2019, the construction of a new production plant for non-sterile semi-solid and liquid forms of drugs is planned to be completed, with a capacity of 34 million packages. This is a technically and financially demanding project, to which a significant part of our resources is currently directed. The new production facility is modernly designed and conceived, as well as other Bosnalijek drives, fully compliant with the requirements of the EU GMP guidelines, which ensures the reputation of the manufacturers of the highest quality standards. We have successfully implemented a very demanding project of serialization, in accordance with the strictest requirements of European Union legislation, thus contributing to the protection of consumers from falsified medicines that are increasingly threatening the advancement of the Internet and mobile technologies. Naturally, investments in development and research projects are continued, with the aim of contributing to the modern approach and new guidelines in pharmacotherapy to more efficient and better treatment of our patients, which are always in the focus of our activities.

To what extent is Bosnalijek currently hiring?

– Bosnalijek employs 870 employees in Bosnia and Herzegovina and in our representative offices. The average age of employees is about 40 years, while 38% are under 35 years of age. I would like to emphasize that our collective is a modern combination of youth and experience, and that the heart of the company is made up of young and promising experts. Half of the employees have an academic level of education, while women perform two thirds of the managerial functions. Our employees are our most valuable resource and driver of all successful projects that we proudly emphasize and without which it would not be possible to achieve such a great result. We are proud and happy that from year to year their number is growing.

What are the plans of Bosnalijek in the upcoming period?

– The company’s strategic commitments are a strong additional expansion to international markets, a leading position in Bosnia and Herzegovina, additional strengthening of presence in the markets where we already operate, strengthening the image of the company, creating additional recognition of our biggest brands and creating new ones, all with the realization of investments, and financial stability of the company.

Do you have anything extra to say that you feel it would be important to our readers?

-Bosnalijek is a company that is permanently patient-oriented, and from year to year, in line with the needs of users, we enrich our product assortment. Over the past few years, we have invested significantly in improving the production program, half of which make new products available on the market over the past five years. At present, we have about 240 different strengths and forms of pharmaceutical products based on 114 different molecules. Our goal is to follow the latest trends in pharmacotherapy globally. By the end of the year, we expect at least 10 more new drugs and food supplements with application in cardiology, psychiatry and urology, designed to help people quickly, efficiently and safely improve their health. Bosnalijek is a home-grown brand that is focused not only on quality but also on continuous additional investments. Our priority is to strengthen the domestic economy, to continue building a base for development and education with the aim of creating a favorable climate and prospects for the life and work of young generations, opening new jobs, which we are particularly proud of, and on this path, we expect the support of the community.

Senad Softić, Governor of the Central Bank of Bosnia and Herzegovina: The...