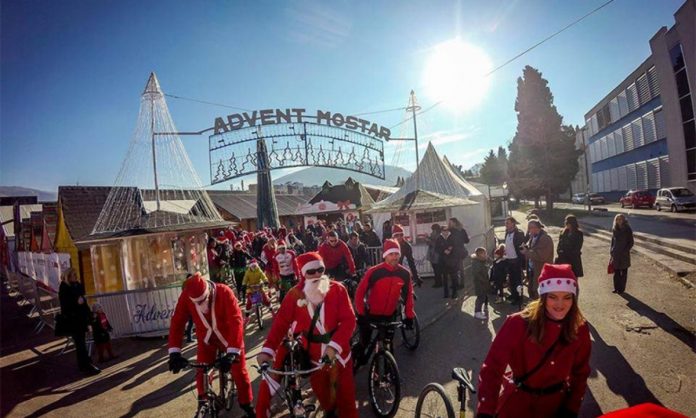 The Citizens Association Advent in cooperation with “Mostar Fair” this year have made efforts to bring a festive mood to the city on Neretva River. The Advent door will open on December 3, so Mostarians will have the opportunity to enjoy the winter holiday atmosphere. The winter city, organizers promise, will provide everything that the famous metropolitan cities are offering.

The winter city will be located in the campus of the University of Mostar this year as well, with this year’s Advent spreading to several other locations in the city.

– This year we are expanding to the location of the Nikola Šubić Zrinjski promenade, thanks to the cooperation with the City of Mostar. Part of our assortment will thus be on a walkway where it will ultimately end. We have joined forces and energy and returned the holiday spirit to Mostar – said Advent member Anamarija Jelonjic, stressing that she hopes that the Mostar Advent will one day be so advanced that Zagreb will be removed from the throne.

As far as content is concerned, there will be something for everyone here. Goran Popovic, a member of the aforementioned association, emphasized that they are especially focused on a happy children’s corner. During the Advent, various creative playgrounds for children, reading rooms and chat rooms will be organized by the National Library of Herzegovina Neretva Canton, art workshops, technical culture workshops and projection of holiday cartoons.

Rich content is prepared for those older ones, so visitors will have the opportunity to enjoy the performances of cultural and artistic societies, music concerts, poetry evenings, DJ programs. Both, young and old visitors will surely find ice ring very interesting, which will bring winter spell to Mostar.

– Dance clubs from Mostar will hold two humanitarian fashion shows, for Association Minores and Community and Public Kitchen. From the beginning to the end of Advent, the theme will be giving – Popovic explained, emphasizing that the distribution of meals to the socially endangered citizens of Mostar will be organized every day around 18:00.

The New Year’s Eve will be something that will be marked not only by Advent but also by the whole of Mostar.

– There’s a party on the promenade for two days. More precisely, on December 30 and 31, there will be a daily and evening program. The New Year’s Eve will also be organized for kids during the day. In the wildest night Mostarians will be entertain by Zoster, Mostar Sevdah Reunion, Rock School band and Sinergija – emphasized Jelonic.

Mineral water from Kiseljak has been exported in the beginning of...