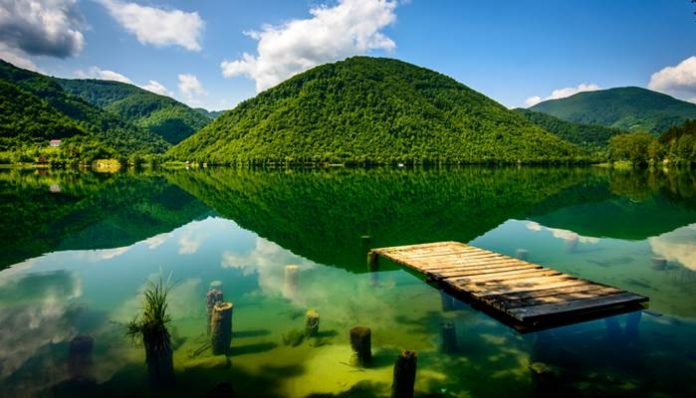 Bosnia and Herzegovina consists of two geographic and historic parts: the Bosnian part in the north (about 40,000 km2) and the smaller Herzegovina in the south. Bosnia is mostly mountainous country, and the same applies to Herzegovina, with different characteristics of the soil.

On the north, a mountainous area slopes down to the hilly area of ​​Posavina and farther transforms the Pannonian Lowland. Dinar parts of Bosnia stretch from west to east. Herzegovina consists of mountainous (high) and Adriatic (low) Herzegovina, which in Neum and peninsula Klek reaches the Adriatic Sea. There are several fields or plains, which stretch along the largest Bosnian rivers (Una, Vrbas, Bosna, Drina), from south to north, or in the case of the Neretva River from north to south, and a special form in the landscape consists of vast karst fields in the southwest, south and southeast (Livno, Duvno, Popovo field).

Few earthquakes and floods constitute the only serious natural hazard in Bosnia and Herzegovina. Among the most important problems of nature are air pollution from industrial units, general pollution of the area due to a lack of general culture and environmental awareness, and a lot of deforestation.

Climate in Bosnia and Herzegovina is a moderate continental climate with hot summers and cold winters. Areas with high elevation have short, cool summers and long harsh winters. Coast and south of the country can boast with mild rainy winters. The capital of the country is Sarajevo (ca. 500,000 inhabitants), and other larger cities are Banja Luka, Tuzla, Mostar, Zenica, Bihać, Cazin, Prijedor, Brčko, Bijeljina, Travnik, Trebinje, Doboj, Gračanica and Livno.