Ermin Junuzović, better known as Erko Jun, fitness model and bodybuilder of BH origin, who has been building his career in the MMA, has been staying in Bosnia and Herzegovina for several days, and he enjoyed with friends and relatives beauties of Sarajevo and Mostar.

Erko is best known for his popularity on social networks; on Facebook, he has nearly five million fans and followers. In the wake of war in Bosnia and Herzegovina, Junuzović, as a two-year-old with his parents, escaped to the Belgian city of Antwerp, where he still lives with his family. In the bodybuilder career, he won many awards worldwide and appeared on the covers of many world lifestyle and sports magazines. He started his career in bodybuilding, where he was the best three times in Belgium, and the second in the Balkans. Following the invitation, he traveled to America for the Model Universe competition, where he won the third place.

– After that, I did more promotions for brands and photoshootings. I worked with the best photographers, and my advertising images expanded across the globe, from Australia to America. Thus, I got a chance for big sponsors. I’ve done more than 12 covers for a world-renowned fitness magazines, and my popularity on social networks grew. Social media has become my business, because era in which we live in imposes that. I earn great money, because the more you are popular, more companies want cooperation, invite me to promotions, seminars and various events – he explains. 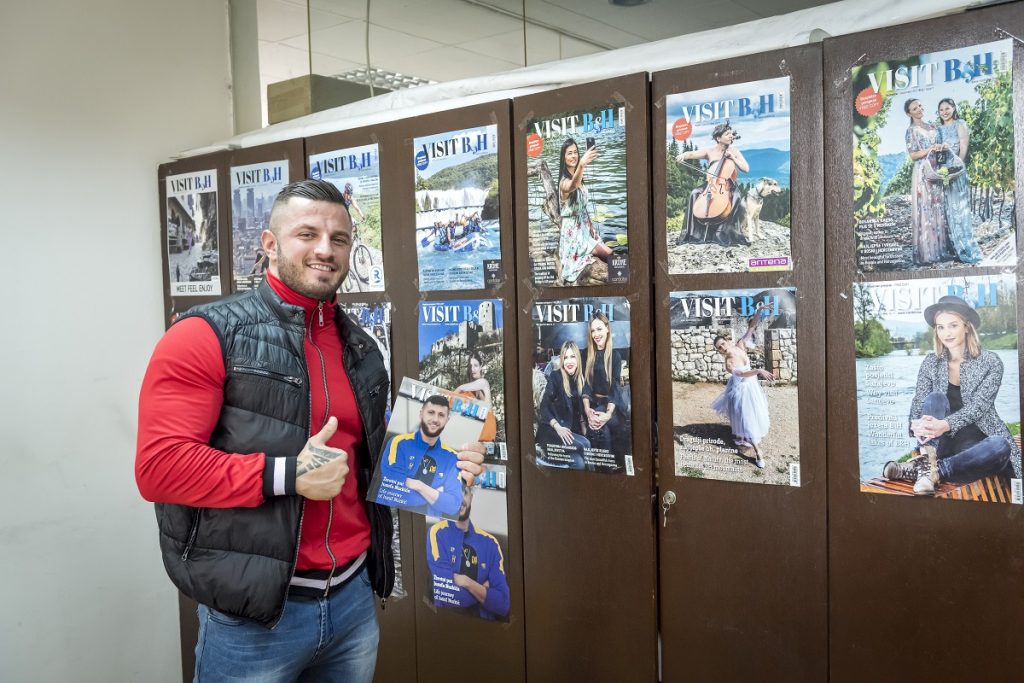 Ermin accepted with enthusiasm the invitation of Magzina Visit B&H team for one afternoon gathering and photoshooting. Socializing and photography took place on the terrace of the Sarajevo Hotel Europe.

– Everything was at the top level. Thank you for fun time. I can see that the magazine is made according to the highest standards and I like to promote the beauty of Bosnia and Herzegovina in a special way. Some people are not even aware of how beautiful a country we have. So, look at our mountains, lakes, rivers … It’s heaven on earth, and many in the world would be happy to change places with us – says Erko.

The most popular Bosnian on social networks was especially impressed by the old part of Sarajevo.

– Baščaršija is something we need to appreciate and protect. Every day I admired the beauty of the old part of Sarajevo. It’s nice to see mosques, churches, synagogues within a few hundred meters … Sarajevo has a soul. This is something special and unique that we have to nurture. I’m particularly happy when I saw a large number of tourists. Chinese, Russian, Africans,… they all come to see the beauty of Sarajevo and Bosnia and Herzegovina. When it comes to our people, the support that I had at every step means a lot to me. I was in Mostar, where my excellent host was a successful BH boxer Damir Beljo. The next time I come, I have to go to Krajina – continues Junuzović.

In addition to the historical and cultural sights of the capital of Bosnia and Herzegovina and the city on the Neretva River, Junuzović enjoyed the Bosnian specialties and beauty of Sarajevo and Mostar women.

– Girls from the Balkans are definitely the prettiest in the world. Their beauty is constantly being talked about. My neck hurts because I turned much to check out girls. Moreover, about food I could talk for hours. In just four days, I gained three pounds. Now I have to go back to the gym. Pies, kebabs, sarma … I do not know what’s more tasty. At the end of my stay in the capital, I can say, whoever comes to Sarajevo will surely return several times a year – Erko underlines.

To recall, Junuzović made his debut in the MMA, in June,  under the BH flag, defeating Tomasz Oswiecinsky in the first round, and after that, in early October, he defeated a Polish, Poleek Monster, in London. Jun entered the MMA accidentally after meeting BH fighter Robert Soldić, better known as the Knight of Vitez, after which he began to train in Dusseldorf in the best German hall UFD Gym, where Soldić also does his preparations.

Saudin Mulabdić, certified PHM specialist: Before you start with fitness, be...